How Long Can Salami Sit Out? [Plus Tips To Keep It Fresh Longer] 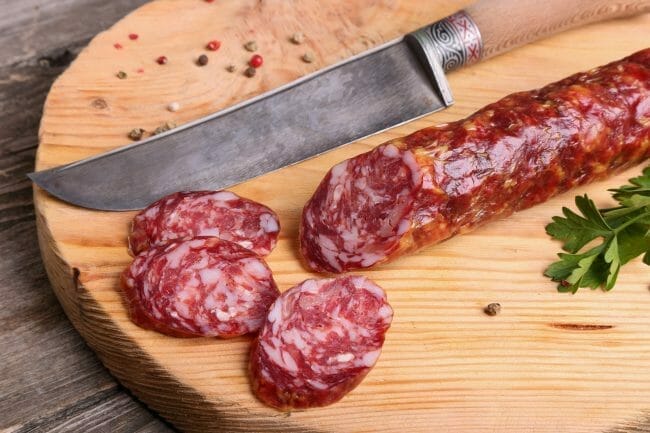 Salami was a staple in my family’s household growing up. Not only was salami used as deli meat in our school lunches, but was a diverse choice for holiday charcuterie boards and creamy pasta dishes like salami carbonara. Whether salami was used at a casual family get-together, holiday occasion, or simply for an on-the-go sandwich; it was a family favorite with a wide range of uses and flavors!

In the typical family fashion, there were certainly times that food was being left out unrefrigerated. Food waste was something we worked as a family to avoid but our health was always the number one priority. This often left us wondering…What are the best practices to keep our meat fresh and safe for consumption?

Similar to other meats, salami can safely sit out for around 2 hours. After that, it’s recommended to put salami in the refrigerator to ensure it remains healthy to eat. If salami has been left out for longer than a 2-hour time frame, unfortunately, it’s suggested to be completely thrown out and disregarded.

As I’m sure you know and have experienced yourselves, it is always frustrating to toss out unused food. However, you otherwise run the risk of getting sick from eating spoiled salami. And that can be intimidating!

How Long Can Salami Sit Out At Room Temperature?

Luckily for the shelf life of salami, it is a cured Italian sausage that undergoes a casing process that allows the meat to air-dry and ferment. This drying process is great for dehydrating bacteria growing properties and allows for salami to have an elongated shelf life, even longer than other types of meat! However, this may come more into play with the aid of freezing and refrigeration.

Similar to most meats, if salami is left out at room temperature, 2 hours is the cap before needing to place it back in the fridge, unopened or opened.

How Long Can Salami Last In The Refrigerator?

The drying process we talked about above is an important factor here. Salami is a dried and fermented meat, meaning the possibility for the growth of bacteria is limited. Remember, this only applies to salami that has not been opened.

When packaged salami has been sliced, bacteria can easily penetrate the meat. Slashing it’s a healthy lifespan to 3 weeks in the refrigerator and 6 weeks when the salami has remained fully packaged and intact.

How Long Can Salami Last In The Freezer?

According to the USDA, salami can last for an indefinite amount of time if frozen and unopened. Even after you’ve broken into the salami, the freshness is still maintained for 2 months in the freezer! This is most likely contributed to the casting and fermentation process the salami receives.

After the fermentation process has been completed, the salami has been fully cured and stored in 68°F – 113.00 °F temperatures for multiple months straight. This gives the salami lifes-span a kick in the right direction as does the drying process. The casting/drying process dehydrates the capabilities of bacteria growing properties to grow within the salami.

How Long Can Cut Salami Sit Out?

When salami has been cut, there is a much higher likelihood for bacteria to reach the salami, you should not leave cut salami sitting out for more than 2 hours at room temperature. After the salami has been cut, it should be wrapped in butcher paper and put in the fridge for no longer than 3 weeks to maintain its freshness.

How Long Can Cheese And Salami Sit Out?

If you’re planning to eat a cheese and salami sandwich, or a charcuterie board containing both salami and cheese, it is recommended to only leave them out for 2 hours at room temperature. After this, both should be refrigerated!

How To Know If Meat Has Gone Bad?

There are a few clear indicators that salami has turned a corner. Let’s get into it!

1. A Change Of Appearance

Typically, salami’s color ranges from light pinks to dark reds, and it’s not out of the ordinary to see white spots on your salami as well. Are these white spots cause for concern? Actually, “Penicillium Nalgiovense” is a standard salami mold that has a meaningful purpose. Penicillium Nalgiovense offers a natural protectant from other compromising molds and bacterias. These white spots not only help the overall health of the salami but additionally keep it from quickly drying out, allowing the salami to be moist and flavorful!

However, if left out for too long, bad bacteria will eventually grow. This mold will most likely appear in little spots, with colors ranging from black, green, or grey fuzz. When you see this on your salami, it’s definitely time to say goodbye!

You may recall from the last time you ate salami that it has a distinct smell! It’s common that its aroma is referred to as a bit acidic with a slight resemblance of cheese, and in most foods, this could be cause for pause.

However, because salami contains natural molds as we discussed above, those smells are normal and not to be taken in alarm. With this in mind, not all smells should be disregarded! If salami smells like spoiled milk or rotten eggs, trust your intuition. It’s a goner!

3. A Change In Texture

The salami that is no longer fresh is often accompanied by a displeasing texture. If your salami is overly dry, has a slimy film, or is mushy and wet –  it is safe to assume that your salami has gone bad. Bummer!

What Happens If You Eat Bad Salami?

Eating spoiled salami will most likely not result in a serious health concern –  but an uncomfortable inconvenience. However, being knowledgeable about the concerns around eating rotten food is not to be understated. Let’s begin with what to look out for!

There are a couple of different symptoms to keep in mind when considering food poisoning. Nausea is one of the first hitting symptoms shortly followed by vomiting and loose stool. Yuck! But nothing to be ashamed of, it’s estimated by the CDC that 25% of Americans will experience food poisoning every year.

There can, of course, be secondary symptoms as well. These symptoms can include fever and abdominal pain/discomfort. Your symptoms will typically last just a day or two, and in more serious cases they can last up to ten days.

Once the substance has been cleared out from your system you should begin feeling much better. But while you are in the throes of food poisoning’s discomfort, it’s important to stay hydrated with clear liquids and should even consider following the BRAT diet. The BRAT diet consists of bananas, rice, applesauce, and toast and is easy on your digestive system.

After some time has passed and you’re beginning to feel more like yourself, you can slowly introduce other foods back into your diet! Avoiding spicy or heavily seasoned foods at the start may be a safe idea.

Most of the time, food poisoning is not a cause for great concern and will resolve within a few days. However, there are a set of symptoms to keep a close eye on. If you are experiencing extreme headaches, blood in your vomit or stool, persistent high fever or any high levels of pain in your back and abdomen, you should seek professional medical care!

How To Avoid Eating Bad Salami?

It is important to keep your salami refrigerated! If you are traveling with your salami, try to keep it cool the best you can with an ice pack or frozen beverages and limit the amount of time it is unrefrigerated to 2 hours. Once you have opened your packaged salami, use a permanent marker to write the date to ensure you can keep track of its freshness. 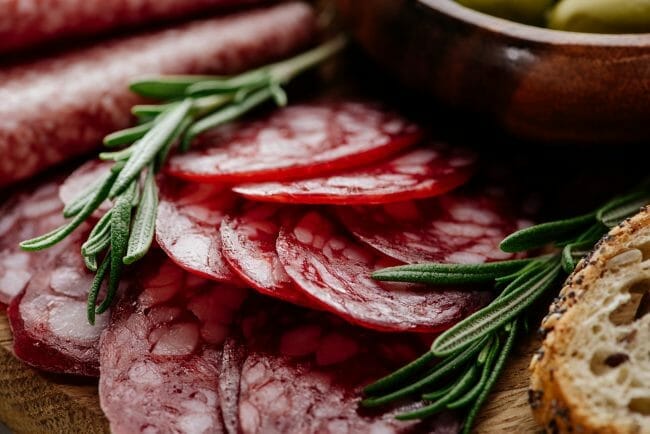 What Is The Difference Between Cured And Uncured Meat?

Learning about the difference between uncured and cured meat is a health concern for some. It is a common belief that cured meats can be unhealthy, or even harmful to your overall health. However, there is no certain scientific evidence given by the USDA that cured meats are a health issue!

The most notable difference between uncured meat and cured meat is that uncured meat uses only a natural curing process. This includes salts, flavorings, and most celery powders and juices. These natural curing agents transform into nitrates and nitrites when processing.

If you have any allergies to nitrates and nitrites it would be wise to opt-out of uncured meat, and choose a cured salami instead! Due to the nature of salami’s casing and fermenting process, the meat is almost always cured!

When you are at the store looking to buy salami it’s well-advised to give the salami a close look. Especially if you’re planning to freeze the salami and keep it stored for a long time.

The salami’s packaging should not be opened, cracked, or deeply bruised in any way. This could be an indicator of poor packaging on the behalf of the provider. When inspecting the salami, check closely for any discoloration or foul smell. If your salami of choice appears to have met your required criteria, it is safe to buy for your family!