How Long Can Spaghetti Sauce Sit Out? [Store Properly] 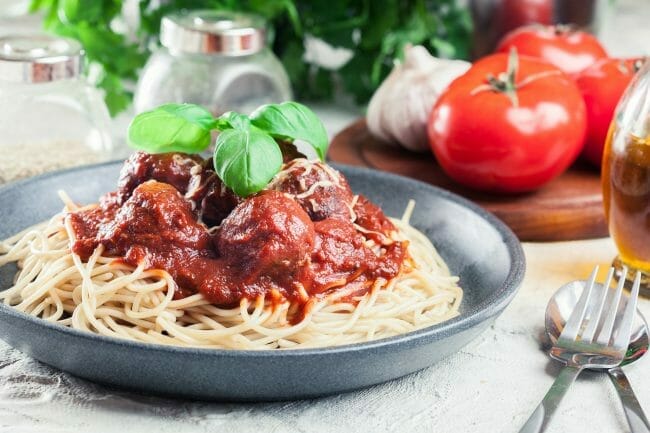 Who doesn’t like spaghetti topped with delicious sauce? It’s classic comfort food, and for a good reason, it’s familiar, hearty, and downright tasty. Plus, the kids love it too!

But have you ever been distracted after making dinner and accidentally forgot to put the sauce away? You may be wondering how long spaghetti sauce can sit out.

Generally speaking, you shouldn’t leave spaghetti sauce at room temperature for more than a total of two hours maximum. After two hours, dangerous bacteria such as salmonella, B. cereus, and Listeria can grow and cause foodborne illness in some individuals. Therefore, if you’ve left your spaghetti sauce sitting out for over two hours, it’s best to play it safe and toss it out.

How Long Can Spaghetti Sauce Sit Out Before It Goes Bad?

Home chefs can make spaghetti sauce using various ingredients. For example, the classic red sauce may use tomato, meat, and vegetables, and alfredo sauce may use heavy cream and cheese.

Unfortunately, all of these ingredients are highly prone to bacterial growth. Therefore, the CDC recommends not leaving any perishable foods out longer than two hours.

If your spaghetti sauce is sitting out for close to two hours, it should be refrigerated as soon as you remember.

If you find that your home is on the warmer side or if the temperature is 90 degrees or higher outside your home, you shouldn’t leave spaghetti sauce out any longer than one hour max.

How Long Can Spaghetti Sauce Sit At Room Temperature?

Dangerous bacteria can grow and thrive on food left out at temperatures between 40 to 140 degrees Fahrenheit.

Since most household room temperatures fall between 68-72 degrees, this falls into what the USDA calls the “danger zone” for food storage.

Because of this, it’s never a good idea to leave spaghetti sauce out at room temperature for over two hours.

Instead, remember to put spaghetti sauce in the refrigerator. Here the temperature is under 40 degrees, and a much safer temperature for your food.

What Happens to Spaghetti Sauce If Left Out Overnight?

If you’ve left your spaghetti sauce out overnight, it’s never a good idea to risk it, and you should throw it away.

Foods left out overnight are sitting at dangerous room temperature and therefore could have hazardous bacteria levels.

Unfortunately, there isn’t a guarantee that heating spaghetti sauce sitting out will kill all the bacteria, and you still run the risk of making yourself or others sick.

How Long Can Hot Spaghetti Sauce Sit Out?

If your spaghetti sauce is hot off the stovetop and left out to cool, you should not leave it out for longer than two hours because of the risk of bacteria growth during the cooling process.

However, if you leave your spaghetti sauce on the stovetop on a simmer, you will have more time.

In fact, the longer you let your hot spaghetti sauce sit at a simmer, the better the flavor will be.

If you have the time, leave your spaghetti sauce on the simmer setting for up to four hours, but make sure to cover it, so the moisture doesn’t escape.

Also, it’s essential to keep it at a temperature above 140 degrees (outside the danger zone) to prevent the growth of harmful bacteria.

Once you remove the hot spaghetti from the stovetop, it’s not advised to leave it out for more than two hours, especially if there is meat or dairy in the sauce. Instead, you should refrigerate as soon as possible.

How Long Can Cooked Pasta Sauce Sit Out?

Suppose you remove cooked pasta sauce from your refrigerator or leave it out after cooking on your stovetop.

In that case, you must make sure that you put it in the fridge as soon as possible or before the two-hour timeline due to the danger zone temperature.

Even reheated and cooked pasta can run the risk of harboring dangerous levels of bacteria.

How To Properly Store Spaghetti Sauce?

For your safety and the safety of your family members, it’s essential to know how to store your spaghetti sauce to prevent foodborne illness.

You can store freshly made spaghetti sauce in the fridge for 3-4 days. Just make sure to put it in the refrigerator before it sits out for more than two hours.

Once you’ve opened jarred, store-bought spaghetti sauce, you can safely store it in the fridge for 3-5 days.

To extend the life of your spaghetti sauce, you should put it in the freezer.

The best way to freeze spaghetti sauce is to scoop it into Ziploc freezer bags or airtight, shallow containers and place them in the freezer.

If you’re using Ziploc bags, make sure to squeeze any excess air out of the bag before storing.

Spaghetti sauce will stay fresh in the freezer for four to six months. Even beyond that, it likely won’t make you sick, but you may want to use it before the six-month mark for quality purposes.

When you’re ready to defrost your spaghetti sauce, place it in the refrigerator. After reheating frozen sauce, it will stay fresh in the fridge for 3-4 days.

How Long Can Tomato Sauce Sit Out?

Tomato sauce is a critical ingredient in spaghetti sauce. Since it’s meat and dairy-free, many think it’s OK to leave it out for a more extended period.

The recommendation for tomato sauce is to refrigerate after two hours of sitting out.

With that said, if you happen to leave tomato sauce sitting out slightly longer than two hours, it is less likely to make you sick than spaghetti sauce made with meat and dairy.

Tomatoes are naturally lower in ph, so some experts argue that they won’t spoil as quickly as other foods.

In addition, jarred tomato sauces typically have additives like salt and citric acid that could help keep bacteria from growing if you accidentally leave the jar out longer than you had intended.

How Long Can Tomato Sauce Sit At Room Temperature?

For food safety reasons, the USDA and CDC still recommend that any food, including tomato sauce, left to sit at room temperatures above 40 degrees be refrigerated before the two-hour mark.

Most individuals keep their homes around 68 degrees which is considered the danger zone for food safety and storage.

How Long Can Marinara Sauce Sit Out?

Marinara sauce is a simple spaghetti sauce made with tomatoes, garlic, herbs, olive oil, and onion.

It often serves as the base for famous Italian dishes such as chicken parmigiana or spaghetti and meatballs.

You can use marinara as a pasta or pizza sauce or a dipping sauce for breadsticks.

We may think of marinara sauce along the same vein as tomato sauce because traditional tomato sauce doesn’t contain meat.

Therefore it won’t spoil as fast. Tomato sauce, and therefore marinara as well, has a low pH of between 3.7 and 4.4.

This acidity makes the sauce naturally resistant to bacterial growth. Therefore, you can leave marinara sauce out a little longer than spaghetti sauce with meat or cheese in it, up to 4 hours.

However, the USDA and CDC, recommend erring on the side of caution and sticking to the 2-hour rule.

It’s best to store your marinara in the refrigerator within 2 hours instead of letting it sit out on the counter at room temperature.

Marinara will be safe when stored in the refrigerator for up to 10 days. It also freezes well in an airtight container or zip-top bag for up to 6 months.

It is not a good idea to freeze, heat, and reheat foods repeatedly, so it is advisable to freeze the marinara in small portions so you only reheat what you need at any one time.

The storage life of marinara sauce will go down if you add meat, cheese, cream, or other vegetables to the sauce.

These items will spoil faster than the tomato sauce, shortening the time you can store it on the countertop or in the refrigerator.

What Happens If You Don’t Refrigerate Spaghetti Sauce?

Some examples of these types of harmful bacteria include Salmonella, E.Coli, Listeria, Staphylococcus aureus (Staph), or Bacillus cereus.

Although you can prevent many foodborne illnesses with proper food preparation and handling techniques, bacteria like Bacillus cereus can grow and multiply on food left sitting out or left to cool.

Most symptoms will resolve on their own in healthy individuals, but take special care if you have individuals with compromised immune systems living in your homes, such as pregnant women, small children, or elderly adults.

How To Tell If Spaghetti Sauce Has Gone Bad?

If spaghetti sauce starts to have an “off” odor or smells rotten, it may have gone bad. If it appears darker or color, or if you begin to see mold growth, it’s time to throw away the spaghetti sauce.

Nobody likes to waste food, but it’s not worth eating questionable spaghetti sauce. The last thing you want is to end up with food poisoning or make anyone in your family sick. When in doubt, toss it out.