How Long Can Spaghetti Sit Out? [Storage Tips] 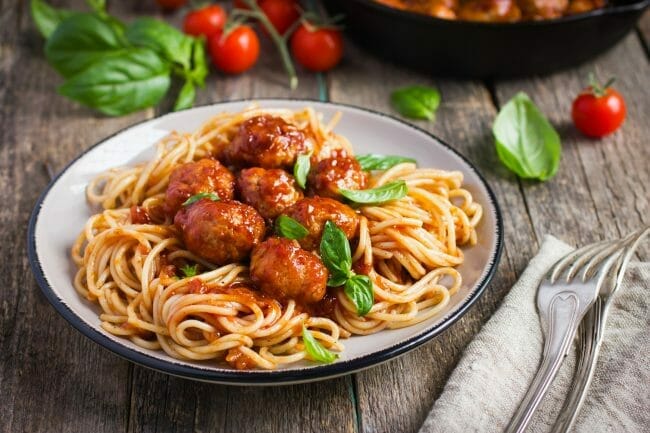 Spaghetti is a favorite in our house, and it’s an easy decision for a weeknight dinner when you want to minimize the complaining and get everyone to eat.

If you’ve made a spaghetti dish and happened to leave the cooked spaghetti noodles on the stovetop or counter for hours sans sauce, you may be asking yourself if the noodles will spoil?

It makes sense that without sauce or meat that spaghetti noodles would stay good indefinitely, right? Not so fast.

Spaghetti can sit out safely for two hours. However, once you pass the two-hour mark, you run the risk of developing a foodborne illness. In addition, cooked spaghetti can harbor a heat-resistant bacteria known as Bacillus cereus because the spores can germinate as the pasta cools. Unfortunately, even reheating your spaghetti may not kill the bacteria.

I’ll admit that I had no idea that cooked spaghetti could pose such a risk of making my family sick.

After all, there isn’t any dairy or meat sauce to spoil. However, after doing my research, I learned that this is certainly not the case.

How Many Hours Can Spaghetti Sit Out?

The USDA doesn’t recommend leaving cooked foods out longer than two hours at room temperature, including any cooked pasta product, even without the sauce.

The reason is that bacteria can multiply in temperatures between 40 to 140 degrees Fahrenheit, even doubling every 20 minutes. The range of temperatures has become what is known as the “danger zone.”

If your room temperature is above 90 degrees and you live in a hotter, more humid climate, you may need to dispose of your spaghetti after one hour or sooner if it shows signs of spoiling.

Can I Eat Spaghetti Left Out Overnight?

Since overnight temperatures in your household are unlikely to fall below 40 degrees, it’s unsafe to consume spaghetti that has been left out overnight.

Instead, make sure to put it in the refrigerator before going to bed and before it’s left to sit for over two hours.

What About Dry, Uncooked Spaghetti?

Dry, uncooked spaghetti noodles are a different story. To preserve the quality of uncooked spaghetti, you should store it in an airtight container in the pantry, although it won’t make you sick even if it is allowed to sit out for a few days.

With proper pantry storage, your spaghetti could last up to two years or longer.

However, it’s essential to check the expiration date of your spaghetti to ensure the best quality.

How Long Can Pasta Sit Out Before It Goes Bad

Since spaghetti and other types of pasta are essentially made from the same ingredients (wheat flour, pasta, and eggs) and run the same risk of developing dangerous bacteria, the same two-hour rule would apply to any other kind of pasta product.

This includes macaroni noodles, egg noodles, or lasagna noodles. The bottom line is that you need to toss out any pasta sitting out for an extended period.

How Long Can Spaghetti Last In The Refrigerator?

If stored properly, spaghetti can last three to five days in the refrigerator and should be safe to eat.

Refrigerator temperatures should always be at or slightly lower than 40 degrees Fahrenheit (four degrees Celcius).

To properly store cooked pasta, place the noodles in Ziploc plastic bags or in shallow, airtight containers to avoid exposure to air.

If you want to extend the life of your cooked spaghetti, it will last in the refrigerator for one to two months.

It will remain safe after that, but you may compromise the quality and taste of the spaghetti.

For best results, cook the spaghetti just to al dente, then freeze in an airtight container or Ziplock bag.

If you overcook spaghetti before you freeze, it may become mushy after it’s thawed.

It’s safe to store spaghetti in your refrigerator three to four days after being thawed in the fridge.

However, if you defrost your spaghetti in the microwave or cold water, you will need to eat it immediately to reduce the risk of illness.

What Will Happen If I Eat Spaghetti That Has Been Sitting Out?

We know that foods left out in the danger zone can make us sick, but how exactly does this happen?

Spaghetti left out is more susceptible to foodborne bacteria growth such as Staphylococcus aureus, otherwise known as Staph.

Staph is everywhere and can be found in natural plant and animal food products and humans’ skin and upper respiratory tract.

It won’t always make you sick, but it can under the right circumstances, such as leaving food out for too long.

Bacillus Cereus is a bacteria that can develop heat-resistant endospores on improperly handled food.

For example, in the case of spaghetti, if it’s cooked and allowed to cool gradually over time, the endospores can survive the heat of cooking and continue to germinate, making you very sick if ingested.

People who become sick with foodborne Staph toxins or Bacillus Cereus may experience gastrointestinal issues such as nausea, diarrhea, stomach cramps, and in some cases, fever.

While the illness will usually resolve on its own, take extra care if you have elderly grandparents, young children, pregnant women, or someone with a compromised immune system in your home.

Some individuals with weakened immune systems could have further complications and are more likely to need interventional medical care.

How Can I Tell If My Spaghetti Has Gone Bad?

If your cooked spaghetti starts to develop a rotten odor or flavor, has a dry or discolored appearance, becomes slimy or gooey, or starts to grow mold, it’s time to discard it.

If you notice mold on your spaghetti, it’s important not to taste it as you don’t want to make yourself sick.

If you have even the slightest concern that your pasta may have been sitting for too long, it’s better to be on the safe side and throw it out.

Luckily spaghetti noodles are pretty inexpensive, and it’s easy to make more should you need it.

The extra hassle is worth saving your or a family member from becoming ill.

How Long Can Chicken Spaghetti Sit Out?

It would be best to handle spaghetti with chicken sauce with caution since dangerous bacteria can multiply rapidly on meat left out at room temperature.

For this reason, don’t leave chicken spaghetti sauce out any longer than two hours. If your home is on the warmer side, you should probably toss it out after one hour.

How Long Can Spaghetti Squash Sit Out?

Spaghetti squash has gained popularity in recent years as an excellent, low-carb substitute for spaghetti noodles.

If you’re not familiar with spaghetti squash, you can find it in your local grocery store in the produce section, along with the other squash.

Spaghetti squash is a winter squash and is yellow, medium-sized, and oval-shaped.

Once roasted, you can scoop spaghetti squash out of its skin with a fork to form “noodles” that hold up nicely under meat sauce, marinara, or any sauce that you prefer over your spaghetti.

If your spaghetti squash has been cooked and is sitting out at room temperature for food safety reasons, you should refrigerate it before two hours.

However, if it’s been sitting out longer than two hours, then you know what to do.

Once cooked, spaghetti squash can last for four to five days in the refrigerator. Make sure to store it in a Ziploc bag or an airtight sealed container to maintain freshness.

If you would like to extend the freshness of your cooked spaghetti squash, you can opt to freeze it.

Freezing it ahead of time is an excellent idea if you’re running short on time and need to get a healthy dinner on the table as well.

Step 2. Cut the squash in half lengthwise

Step 3. Scoop out the seeds

Step 4. Place the spaghetti squash on a baking sheet, cut side up, and roast for 30-40 minutes until tender. Cooking time will largely depend on the size of your squash.

Step 5. Remove from oven and allow to cool

Step 6. Run a fork through the squash lengthwise to form the noodles

You can store spaghetti squash in the freezer for up to eight months.

On The Counter Or In The Pantry

Most people like to store the whole spaghetti squash until they’re ready to enjoy it.

You can keep spaghetti squash on the counter or the pantry for one to two months, as long as the temperature is moderate.

Most people don’t have a root cellar or something similar. However, if you do, you could keep spaghetti squash for up to three months.

It might be a surprise to many (including myself) that cooked spaghetti shouldn’t stay out at room temperature for over two hours maximum.

If you’re tempted to serve it to your family after sitting longer than that, please think twice. You could make a loved one very sick.

Luckily spaghetti is a relatively low-cost, quick, and simple dish to prepare, and what mom doesn’t love that?

But what is spaghetti without the sauce? If you’re curious to learn more about food safety and spaghetti sauce check out our other article “How Long Can Spaghetti Sauce Sit Out.”