How To Store Banana Bread To Keep It Moist (Do This!) 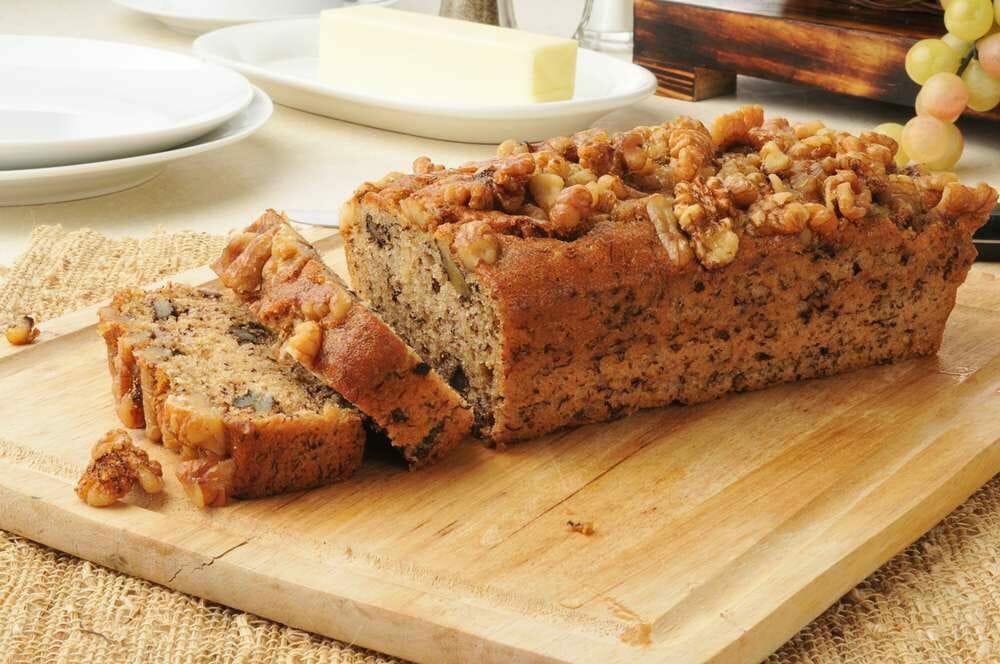 If you’re a kitchen wiz, then you already know that making banana bread is one of the most common ways to do something with older bananas that you wouldn’t add to a lunch box. Banana bread rules! It’s delicious and it’ll keep for a longer time than most other items you can make with bread. The thing is, you need to know how to store banana bread if you want to make the most of it. So, how do you do it?

The best way to store banana bread is to place it on a counter at room temperature, covered in plastic wrap. You can also use a hard storage container with a lid to contain the banana bread. While it can also be frozen for up to four months, you should never put banana bread in the freezer.

Getting the most out of your freshly-baked banana bread is a goal that makes a lot of sense. That’s why we’re betting you’ll go bananas over this guide filled with banana bread storage tips and tricks.

How Long Should You Expect Banana Bread To Last?

Most of the time, banana bread will last for four to five days on a kitchen counter without any change to texture. After that, you may notice staleness.

In full, you should expect it to last for a week. If you choose to freeze banana bread, then the lifespan is *technically* indefinite. However, the more realistic lifespan is closer to three to four months.

When Should You Throw Out Your Banana Bread?

Honestly, this gets to be a little more flexible than most other foods out there. (Looking at you, cucumbers!) Banana bread doesn’t have a set expiration date, but there are some things that suggest it’s time to get rid of it. The most common signs include:

What Happens If You Eat Rotten Banana Bread?

For the most part, eating rotten banana bread is not very likely to get a typical person sick as long as no mold is present. It will just be very crunchy and bland. Sometimes, if the rot is really bad, it’ll taste pretty bad or flavorless. In some cases, it may also cause a mild stomach sickness or gas.

If there is mold involved, things get a lot more risky. Most people are allergic to at least one or two forms of mold.

This means that you run the risk of getting hives, breathing problems, or other similar allergic reactions when you decide to shovel some moldy bread down your throat. After all, not all bread molds are penicillin!

How To Freeze Your Banana Bread

While leaving your banana bread wrapped up on a counter is pretty straightforward, freezing your banana read isn’t. There are several different methods that you can use to freeze banana bread. The method that you choose will depend on how much bread you have. Here’s what you will need to know for each quantity…

If you have a whole loaf of banana bread, wrap the entire loaf in aluminum foil. Then, place it in a plastic bag and use your hands to press out any extra air you have in the bag. Seal it, and toss it in the freezer.

Decided to tuck half of that freshly-baked banana bread away? We dig it. Double-wrap half a loaf in foil, put it in a zip bag, and remove any extra air that is inside it. Seal it up and place it in the freezer.

Slicing your banana bread prior to storage isn’t a good idea, since it’s both time-consuming and can speed up the aging process of your bread. With that said, we totally get that a lot of people end up with individual slices of bread for one reason or another. Here’s what you will need to do here:

Now that you know the basics, it’s important to get the right tips and tricks to maximize your bread’s life. The tips below will help you out.

How To Revive Stale Banana Bread

Stale banana bread is no fun and often carries a texture that would put most of us off of this treatment for a million years. Thankfully, there are a couple of ways to revive banana bread that’s gotten a little dry. Let’s take a look at the two easiest ways to make it happen.

Are you a fan of crisp, tasty banana bread? If so, then you are going to appreciate the toaster method. To do this, grab a slice of banana bread and shove it in the toaster. Once the bread is toasted, it’ll feel crunchy and have a little more revival in terms of flavor.

The microwave method offers up a way to get the softness of your banana bread back from it being in its stale state. To do this, follow these steps below:

Is banana bread good for you?

Not really. While banana bread has a fair amount of potassium, it’s not diet-friendly in the least bit. Most recipes are filled to the brim with sugar, fat, and oil. If you are on a low-carb diet like the Atkins Diet or keto, then banana bread is basically off the menu simply due to the carb intake it offers.

A bigger problem with this carb-rich treat is that it does not do much when it comes to keeping you full. So while you might eat a lot of this bread, you can almost certainly count on feeling hungry soon after.

What is the difference between banana bread and banana cake?

Banana bread is usually baked in a loaf and has a spicy taste to it. It’s also denser and is rarely ever topped with any sort of icing. Banana cake, on the other hand, is a lot like a typical butter or vanilla cake that just so happens to have some mashed bananas added to the mix.

Unlike banana bread, banana cake is often made to be light and fluffy. It’s also sweeter and is more likely to have an icing topping. (Might we suggest some buttercream?)

Are overripe bananas safe to eat?

Believe it or not, this is one of the few foods that are genuinely great to eat even if they are no longer considered to be fresh. Overripe bananas have a high concentration of antioxidants and nutrients, making them a good snack nutrient-wise. So while they may not be a typical option, they still might be worth salvaging.

The only time this is not true is if the bananas in question are clearly moldy. If you see mold on the interior of the banana, it’s better to toss them out.