How To Tell If Pork is Bad [We Have The Details] 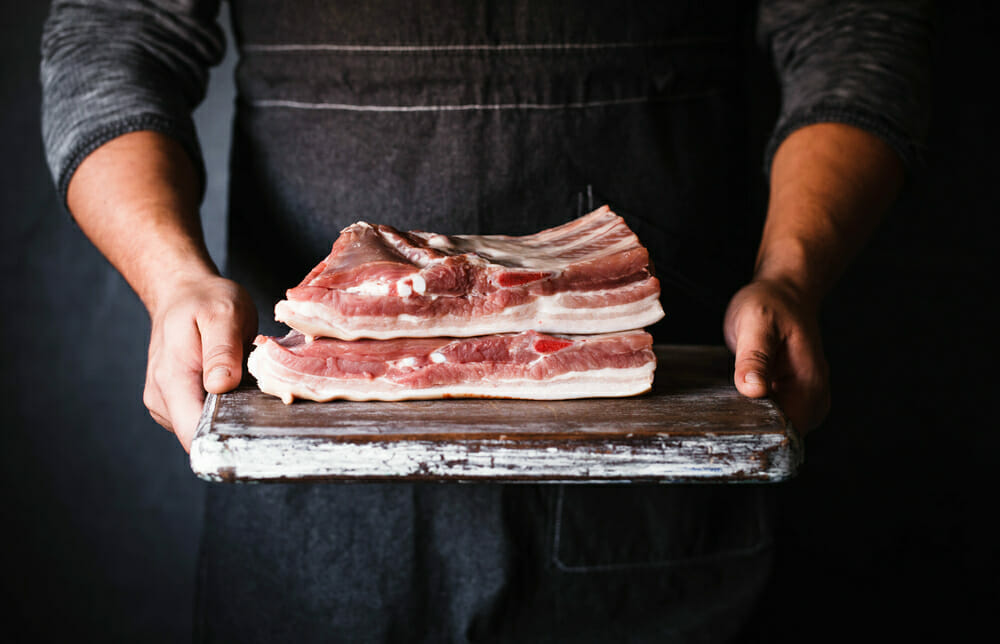 Pork is a popular protein all over the world, but not everyone is as comfortable cooking and handling pork as they are chicken or beef.

Eating any meat product once it starts to spoil can be dangerous, so one common question is how to know whether pork is starting to go bad.

You can tell if pork is bad by using your senses. If it is discolored (like gray or yellow), has a foul odor or smells like ammonia, or feels slimy or mushy, it is likely bad. Other signs may include puffy or bloated packaging, very dry texture, a fishy smell, or if the expiration date has passed.

How to Tell If Raw Pork is Bad

Here are the top signs that your pork is bad:

How to Know If Your Pork is Bad

The easiest way to judge whether pork is still good is to go by the “use-by” or “sell-by” date on the package. In most cases, you shouldn’t consume meat that is more than a day or so past the “use-by” date.

Still, going by the date also assumes that you’ve kept the pork under refrigeration, handled it properly, and cooked it thoroughly.

However, there may be a time when you need to determine if pork is still good without using the date information. In that case, you can use your senses to evaluate whether the pork has gone bad or is beginning to spoil.

Even if the “use-by” date hasn’t passed, it’s always a good idea to visually inspect food products and be aware of any unusual or foul odors.

That’s because meat can still spoil due to poor handling, temperature abuse, or cross-contamination.

If the package looks puffy and has air trapped inside, that’s a sign that the protein may be going bad.

When meat starts to spoil, bacteria can produce gasses that cause the package to appear bloated. Never use meat (or any food, really) that has bloated packaging.

Raw pork should have a pink coloration with white fat. When you open the package, pork is typically moist or damp, but it shouldn’t feel slimy.

Sometimes pork juice leaves a sticky residue on your fingers. That’s normal, but the pork itself shouldn’t feel sticky to the touch, and anything slimy is an indication of spoilage.

Sometimes when pork starts to break down, the color will turn from pink to gray. If there is minimal graying on the edges and the pork is still in-date with no odors, it’s likely still fine to cook and eat, especially if it’s still pink inside.

However, if the entire piece (or most of it) is gray, or if you see shades of green, brown, or yellow, it’s a good sign that the pork is starting to turn.

Discoloration combined with any other signs (like the smell) is definite evidence that the meat is beginning to spoil.

Pork should also feel firm to the touch. Depending on the cut, it should have a similar texture and firmness to chicken breast.

Some cuts, like pork loin chops, may feel softer. However, if the pork is overly soft and mushy or extremely dry, it could mean that it’s old and starting to turn. If nothing else, the change in texture is an indicator of the quality being affected.

Does Raw Pork Have a Smell?

Raw pork is usually pretty close to odorless. If it has a smell at all, it should just smell like fresh meat.

Fresh pork should never have a foul odor. If it smells like ammonia, sour, rancid, or just smells “off,” it’s probably a good idea to throw it away.

Your sense of smell is one of your best defenses against cooking or eating spoiled or bad foods, especially meat, so trust your senses and go with your gut.

If your fresh, uncooked pork has a fishy odor or smells like ammonia, rotten eggs, or just plain rancid, it means you should throw it away.

Fresh pork doesn’t have much of a smell, so any strong odors (especially if it’s an unpleasant one) should be a good indication that the meat is starting to spoil or is already bad.

How to Tell If Cooked Pork is Bad

Knowing if cooked pork is bad may sometimes be more difficult than raw pork. Still, there are some signs to help you evaluate whether the protein is still safe to eat.

As pork begins to spoil it will develop a foul odor. Cooking the pork will normally make the odor even worse.

Cooked pork shouldn’t have any smell beyond whatever it’s seasoned with. If you smell anything sour, fishy, rancid, or just plain gross, you shouldn’t eat it.

As bacteria in spoiled meat break down proteins and fats, gasses are released that smell pretty bad. So, you should always trust your nose when you cut into a piece of meat and it smells “off.”

Cooked pork may also have a slimy texture or rancid taste if it’s bad. These are definite signs that you should throw it away.

One thing to keep in mind, especially if you’re not experienced with cooking pork, is that it often secretes a white residue that looks kind of like egg whites during cooking. This is a normal part of the cooking process and doesn’t mean that the pork is bad.

What Happens If You Eat Bad Pork?

Pork and other game animals are susceptible to Trichinella roundworms, and if you don’t cook pork well enough you can expose yourself to trichinellosis.

This illness can cause nausea and vomiting, diarrhea, abdominal pain, fever, headaches, chills, difficulty breathing, and may even become fatal.

Spoiled pork can be contaminated with bacteria like salmonella, E. coli, or staphylococcus.

Cooking meat to the proper temperature can help kill off harmful bacteria, but if there are too many present, they may release harmful toxins into the meat.

How Long Does Pork Last?

Pork typically lasts three to five days in the refrigerator, though it’s always best to cook (or freeze) it the same day that you purchase it whenever possible. Once cooked, you should eat or store the pork in the fridge within two hours.

The USDA recommends using cooked pork within three to four days, as long as it’s been refrigerated at 40°F or less.

The type of bacteria that causes spoilage can continue to grow even under refrigeration, so you would likely notice a change in the pork’s appearance or smell once it started to go bad in the fridge.

How Long Does Pork Last in the Freezer?

According to the USDA, frozen meats can be kept at zero degrees Farenheit indefinitely.

However, most meat products will not stay good for that long in terms of quality and taste. To have the best results, you should try to use the frozen pork within three months.

Make sure that when you remove the pork from the freezer you cook or reheat it to at least 165°F for food safety.

How to Store and Cook Pork Safely

The FDA recommends cooking pork to a minimum internal temperature of 145°F and letting the pork rest for at least 3 minutes before consuming. Doing so will reduce the chances of a foodborne illness.

In addition, it’s important to keep pork properly chilled at 40°F or less. Temperatures of 41°F and up are ideal conditions for bacteria growth, which is why it’s known as the “temperature danger zone.”

If you don’t plan on cooking pork within three or four days of purchase, you should freeze it instead. You can safely freeze pork for a long time (sometimes up to a year, depending on the cut), so it’s better to freeze it for later just to be safe.

If you do freze the pork, wrap it tightly and store it in an airtight container or zip-top bag. Be sure to label the package with the date so you know what’s inside and how long it’s been in the freezer.

Pork is a very popular protein all over the world, which is why it’s sometimes called “the other white meat.”

While pork isn’t always as dangerous as poultry when it comes to cooking temperature, it can still make you very sick if it’s not handled properly or if it becomes spoiled.

When pork goes bad, you’ll be able to tell because of how it looks, smells, and feels. That’s true of many other meat and food items, so it’s a good idea to trust your instincts when dealing with potentially bad food items.

Of course, you should always start with the date on the package and any outward signs that the pork may be bad (like bloated packaging).

Then, use your senses to make a good decision. If the meat is gray, yellow, green, or any other unusual color, you should probably throw it away.

Pork that has a foul odor or smells like ammonia is also potentially spoiled, so use your nose as your guide.

Remember, even with pork that’s still good, proper handling and cooking practices are the best ways to keep you and your family safe. Always wash your hands before handling food items and keep perishable items cold until you’re ready to use them.