How To Tell If Shredded Cheese Is Bad? 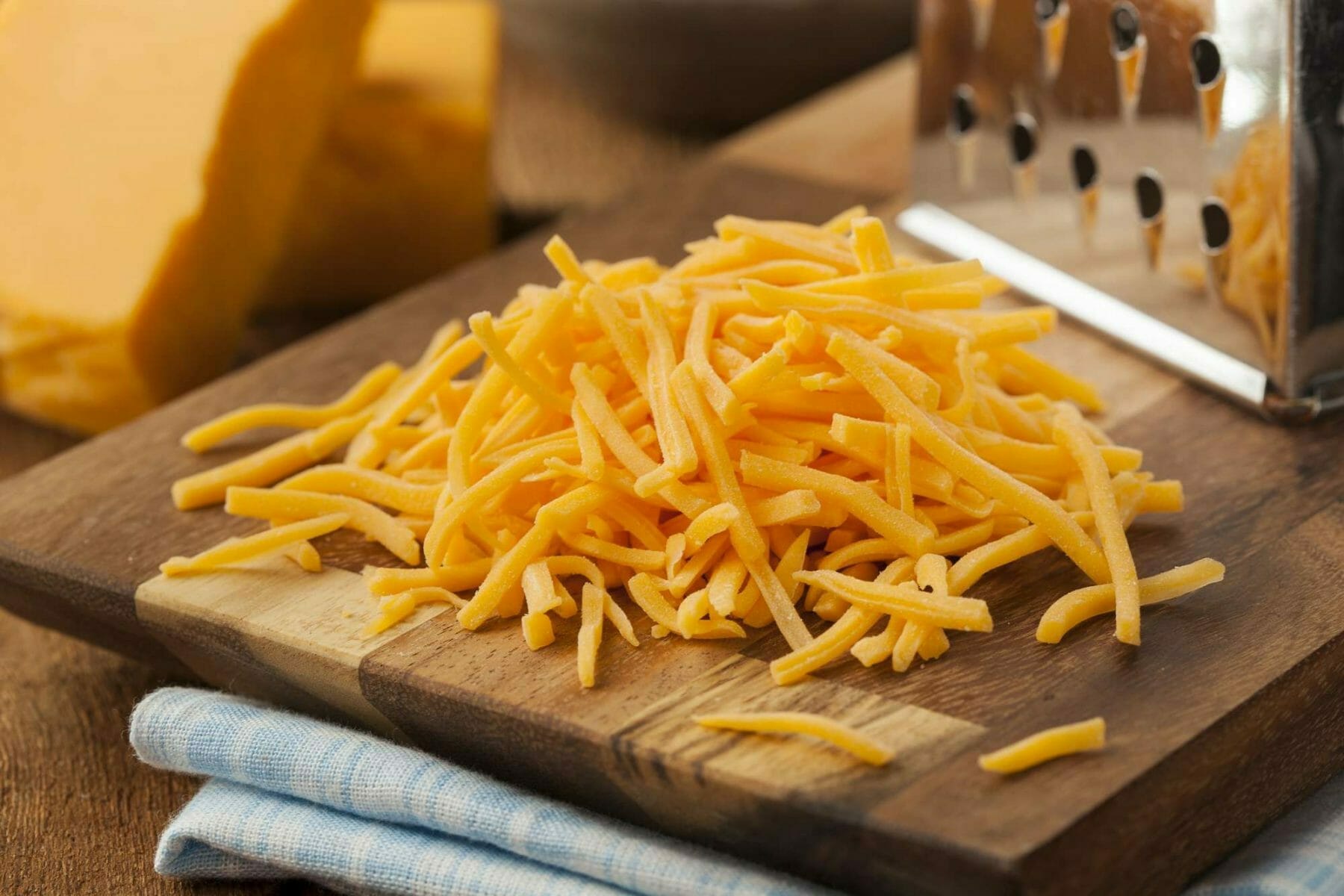 Shredded cheese is a versatile food. You can use it in many dishes or eat it alone. It’s one of the most popular types of cheese that people buy because it’s affordable and you don’t have to waste time shredding it.

It’s generally found in bags, so it might be a little confusing as to how long it will last opened or unopened.

Generally speaking, you can tell shredded cheese has gone bad by simply smelling the package for signs of a sour odor. You may also notice mold growing in the bag and on clumps of cheese.

Some may wonder if they can still consume spoiled shredded cheese or if they should just throw it away and call it a day. In this article, we’ll go over all of the do’s and don’ts that come with the spoilage of shredded cheese.

How To Tell If Shredded Cheese Is Bad

It’s important to note that some cheeses are naturally soft, such as Monterey Jack whereas Parmesan and cheddar cheese is harder. As long as the texture isn’t slimy or gooey, chances are the shredded cheese is still good if it doesn’t contain unspoiled flavor.

Can You Eat Spoiled Shredded Cheese?

You can eat spoiled cheese, but it’s good practice not to. It shouldn’t severely hurt you if you do choose to consume smelly, moldy cheese, but you may end up feeling a little sick, especially if you don’t have the best immune system.

If your body can’t handle it, you can contract a foodborne illness, have an allergic reaction, become hospitalized, or worse. Bad cheese can contain Salmonella, Listeria, E. Coli, and Brucella.

These can result in a mean case of food poisoning, which is often characterized by nausea, vomiting, abdominal cramping, fever, and diarrhea. More often than not, eating spoiled cheese may only cause diarrhea.

Listeria is one of the most common reasons for food recalls in the United States. It’s a foodborne bacterial illness that can be extremely serious for pregnant women, people with weakened immune systems, and people older than 65.

Symptoms of this can begin a few days after you’ve eaten contaminated food, but it can take 30-days or more. You may experience fever, chills, muscle aches, nausea, diarrhea, headache, stiff neck, confusion, loss of balance, and convulsions.

Coli can be found in contaminated water or food and symptoms can begin three or four days after exposure, but you can become ill as soon as one day after.

Symptoms include diarrhea, stomach cramping, nausea, or vomiting. Diarrhea can cause dehydration, so it’s important to stay hydrated. Generally, healthy individuals recover within a week.

The CDC estimates that Salmonella bacteria is responsible for around 1.35 million infections per year. Most people who get this type of food poisoning have diarrhea, fever, and stomach cramps.

Symptoms can start as soon as 6 hours and as long as 6 days after exposure. The infection generally lasts 4 to 7 days and most people recover without needing treatment.

Can You Eat Shredded Cheese After The Expiration Date?

However, if you haven’t opened the package and noticed white spots on it, even if the cheese hasn’t reached the expiration date, you should throw it away.

What To Do If You Accidentally Eat Spoiled Cheese?

There’s not much you can do if you accidentally consume spoiled cheese other than watch for symptoms. Most likely, you’ll be fine. However, there have been some cases where the mold on spoiled cheese has been dangerous.

If you suddenly develop symptoms that are concerning such as shortness of breath or an elevated temperature, then your bad cheese has created a monster and you will need to seek medical attention.

Each type of cheese has its own indicators of being spoiled, but you will find that just about every cheese out there has an ammonia smell when it’s bad. If your shredded cheese smells like ammonia or urine, it’s definitely time to toss it.

Why Does Cheese Mold In The Refrigerator

When cheese is stored in a bag in the refrigerator, moisture grows in the package, especially if it’s wrapped in polythene. This is the perfect growing environment for mold to rear its ugly head.

If you see dark fuzzy mold on the cheese, don’t consume it. Throw it away immediately as it’s now unsafe to eat or cook with.

Can You Stop Shredded Cheese From Molding?

You can’t stop it completely, but you can slow down its process. There’s a pretty simple tick for preventing cheese from quickly becoming moldy. You can wrap the cheese in parchment paper or waxed paper.

These materials are breathable, so moisture won’t accumulate in it unlike pre-packaged shredded cheese. After each use, wrap it in a new piece of wax or parchment paper.

If you’re baking intentionally moldy cheeses such as gorgonzola or brie, you have nothing to worry about, but cheese that’s not meant to be consumed when moldy, baking it won’t salvage it.

Can Moldy Shredded Cheese Be Saved?

Moldy shredded cheese cannot be saved. USDA Food Safety Information explains that there are separate parts of mold that can be seen through a microscope.

There’s the root threads that invade the food, a stalk that rises above the food and spores that form on the ends of the stalks. The spores give the mold its color.

So even the smallest dots of mold on shredded cheese is just a tiny fraction of what’s really brewing inside that bag. The Mayo Clinic does say it’s okay to cut the mold off cheeses that are hard or semi-soft like Cheddar, Colby and Parmesan, but not shredded cheese.

If you plan to cut the mold off your cheese before shredding it, you should cut any visible mold and at least 1” of the cheese around the mold. Don’t let the knife touch the non-contaminated parts of the cheese.

How To Store Shredded Cheese

If you want to make your shredded cheese last longer, you can either leave it in its original package or put it in an airtight container stored in the refrigerator on the bottom shelf where the air is colder.

Some may think that you can leave a package of shredded cheese on the counter and it’ll be okay to eat. In fact, this is wrong. When cheese is exposed to warm temperatures, bacteria will begin to grow, even in a sealed package.

How Long Does Shredded Cheese Last?

Pre-shredded cheese has an expiration date on the package that gives you an indicator of how long it will last unopened in the refrigerator, but it’s generally around one to two months.

If it’s unrefrigerated, the cheese is good for around 4 hours before the texture will change. If you’ve opened it, it’s good for about a week afterward.

Can Shredded Cheese Be Frozen?

If you choose to freeze your shredded cheese, it will last between six to eight months. Frozen shredded cheese may lose some of its flavor and texture.

When thawed, it’s best suited for sauces, soups, and casseroles where the difference in flavor isn’t as noticeable. Freezing your cheese has to be done properly if you want it to last a while.

If you’re freezing it longer than two months, it’s suggested that you place it inside of a heavy-duty freezer bag to prevent freezer burn. For best quality, cheese should be constantly frozen at 0 degrees Fahrenheit. This will keep it safe indefinitely.

If your shredded cheese is moldy, moist, or smells a little funky, do not consume it. As you can see from all of the information above, there are plenty of infections you can get from eating spoiled cheese.

It’s important to look for and recognize the signs of bad cheese before consumption. Most of the time, consuming moldy cheese may only cause a slight stomach ache, but in extreme cases, it can cause death.

This is why it’s better to throw away a $4 bag of shredded cheese than to risk your health.