How To Tell If Watermelon Has Gone Bad [Easy Signs] 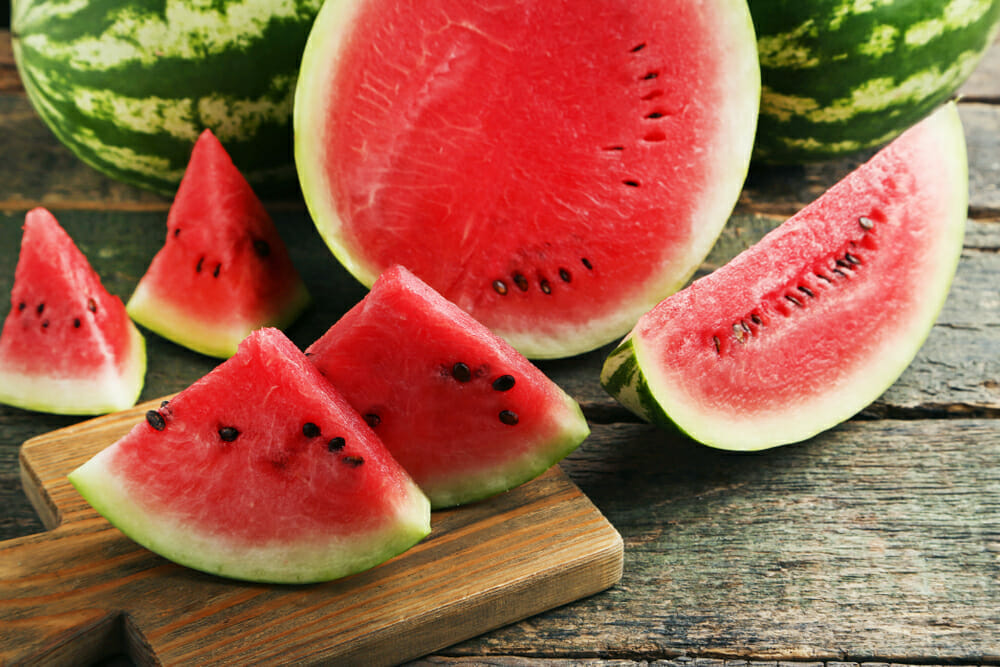 Watermelon is the perfect side dish to beat the summer heat! Especially because it’s sweet and juicy. Typically, watermelon is red or sometimes pink with black or tan seeds.

Otherwise, it can go bad much more quickly and prevent you and your family from enjoying this delicious treat.

After all, nobody loves taking a bite out of molding or spoiled watermelon only to take a trip to the hospital!

Generally speaking, watermelon that starts to spoil will show signs of discoloration, and differences in texture, smell, and taste. The texture will reveal a fuzzy or slimy surface whereas the smell is akin to rancid eggs. Of course, any sight of these differences is a clear indicator of spoilage so be sure to throw out the watermelon right away.

How To Know If Watermelon’s Spoiling

Four signs to pay attention to regarding when watermelon starts spoiling are sight, smell, touch, and taste.

Which, the last of these four of the five senses? Gross! Having to bite into moldy watermelon will leave you feeling nauseous and needing a trip to the hospital depending on how much you’ve consumed.

Precut watermelon, generally speaking, will start to become shriveled, dry, mushy, and slimy similar to the inside appearance of a whole watermelon.

There will also be a smell akin to rancid eggs when these watermelon pieces go bad. Also, pay attention to any fuzz that appears on the watermelon.

Any whole watermelon will appear like precut when it’s starting to spoil. However, you might not see any signs until it’s gotten worse.

To the point where the skin of the watermelon will start developing discoloration and fuzz. It will become slimy to the touch.

5 Signs to Pay Attention to When Watermelon’s Gone Bad

One of the first signs of mold or spoilage is when the watermelon changes color. After all, we’ve always known that watermelon is green on the outside, with red on the inside and perhaps black seeds.

It’s typically light to dark red when it’s fresh without any sense of mold or discoloration.

Any other noticeable differences, such as variants of color that come in patches, will indicate mold. Some of these colors that might show up are green, blue, black, or white.

So always be sure to check through that none of your watermelon pieces have gone bad without you checking in on it.

After checking the smell, feel the texture. Does your whole watermelon feel slimy on the surface of the skin? Or when you cut it up into pieces, do the watermelon chunks feel slimy to the touch?

Also, be sure to look for any signs of fuzz that may appear on the watermelon chunks as this is a clear sign of mold.

Traditionally, the fuzz will be white with hints of gray. The moment you spot this, throw it out. The watermelon is not suitable for serving.

The smell is another indicator of whether your watermelon has gone bad. Due to the water that is within watermelon, and other components, it will start smelling of rancid eggs.

Which can be off-putting, given that this is a fruit. Unfortunately, because of the fruit’s sweetness, the decomposition will happen faster because bacteria love sugar.

Pay attention to the taste of the watermelon chunks, as sometimes it may not be obvious when they’ve gone bad.

Anytime that watermelon has spoiled, it will taste spoiled, too. Very sour and bitter. With a slimy texture on the tongue. Ugh! Talk about gross. Nobody wants to take a bite into a piece of slimy, old watermelon.

Something to always keep in mind is to check the expiration date. It would be a good important step because, in this way, you’ll be better able to avoid the chance of biting into a nasty chunk of watermelon.

With any whole watermelon, this would not be useful. After all, expiration dates only come with pre-packaged watermelon.

So be sure to pay attention to these to avoid food poisoning that can occur when eating spoiled watermelon.

What Happens When I Eat Spoiled Watermelon?

Thankfully, most of the time, eating spoiling watermelon is not the end of the world.

However, when watermelon that is rotten is consumed in larger quantities, food poisoning is apt to follow. And food poisoning, if it’s severe enough, can land someone a trip to the hospital.

However, some of the symptoms to pay attention to that can happen as a result would be nausea and vomiting.

Always be sure to select fruits and vegetables that match the CDC’s guidelines to avoid eating spoiled watermelon/watermelon that’s been poorly handled.

How Long Does Watermelon Typically Last?

Watermelon typically lasts about 1 week at room temperature once ripe enough or 2 weeks in the fridge if stored properly.

Several keyways to extend the shelf life of any watermelon is to store it in either the fridge or freezer.

Especially if you purchase your watermelon already precut from the store because this is always stored in the fridge.

The cool temperature and the container that it is sealed away in will almost always guarantee that the watermelon is safe from exposure to bacterial infection.

Always be sure to cut up watermelon before storing it in the fridge. It lasts longer. Especially when it’s sealed up!

One of the many ways to store watermelon in the fridge is to simply grab a container and put saran wrap over it.

This is a common household item that can be found in the kitchen to use to ensure that the watermelon’s shelf life extends.

Another method is using a meal prep container or even something as simple as a zip lock bag will do!

Always store your watermelon pieces on a piece of parchment and be sure it’s separated out!

In this way, you’re ensuring that the watermelon doesn’t freeze together and create a big mess.

Be sure to not allow the watermelon to thaw out because otherwise, the texture will turn from solidified to soggy and mushy.

Not to mention that the watermelon will go bad. Watermelon that is stored will be eaten frozen so it will lose its original texture.

As you’re shopping for a watermelon at the store, be sure to thump it on the rind, check the field spot, and feel its weight.

If you do these three steps, you’ll be able to tell almost immediately if the watermelon is underripe, ripe, or overripe.

And if you’re buying it underripe to wait until it ripens at home, you’ll be able to use sound to tell more easily.

What this does is it tells the person what kind of sound they hear from within the fruit.

This sound will tell them if the watermelon is underripe, ripe, or overripe. An underripe watermelon will have a higher pitch resonance.

A watermelon that is ripe will have a deep, hollow sound when you thump the rind of it with your hand. Finally, an overripe watermelon will sound more like a thud than anything else.

The next step that you should always take if you’re still not sure is to check the field spot.

And by field spot, we of course mean the back of the watermelon. There are certain colors are clear indicators of whether the watermelon is ripe enough to consume.

Now, when checking the field spot, keep a look out for colors such as white, orange, and dark yellow.

When the field spot is white, this means that the watermelon is not ripe enough to be plucked.

In fact, it means that this watermelon is underripe and should be left on the vine when purchasing a watermelon from a local farmer.

These watermelons need to be kept on the vine a little longer until they’re ripe enough to consume.

If the spot is not orange, then sometimes it is yellow. Meaning that the watermelon is juicy enough and sweet enough to consume.

Precut Vs. Whole: Which Should I Choose?

Precut watermelon that’s bought from the stores is extremely convenient versus the whole watermelon.

Many buy the packaged chunks of watermelon fresh from the stores. To prevent eating spoiling or rotting watermelon, always be sure to check the expiration dates and the buy/sell dates.

These are clear indicators of how long your precut watermelon is going to last.

On average, people love getting precut watermelon because it’s easy to prepare and serve.

Another benefit is that precut watermelon lasts about 2 weeks when it’s stored in the fridge. This is about one week longer than a whole watermelon and you’ll be able to pop it in your mouth the moment you open it up!

However, there are some definite downsides that need to be discussed before you decide to purchase precut watermelon!

There are some definite downsides to precut watermelon such as the dangers of poor preparation and handling.

In 2019, the CDC actually ends up shutting down CAITO FOODS because of the exposure to bacterial infection.

What’s sad is that people ended up getting an outbreak of Salmonella, E. Coli, and Listeria. Something that, as it turns out, they could’ve prevented by simply handling their precut watermelon better.

An obvious plus of any whole watermelon is that you can purchase it while it’s not ripe and wait until it is.

Simply put, you don’t need to necessarily follow those steps in selecting a good watermelon.

However, they are helpful if you’re wanting a fresh watermelon then and there. Or are doing some last-minute shopping to prepare for that family BBQ or summer fling.

There are downsides to any whole watermelon that include having to cut and prepare and potentially misreading the signs.

Always be sure to check thoroughly your precut watermelon slices, and the ones you cut up yourself.

Nobody wants a trip to the hospital on account of food poisoning. And while the chances of you going to the hospital are less because you might not necessarily be exposed to substances such as e. coli, salmonella, and listeria it’s always important to take the preventative measures, necessary.