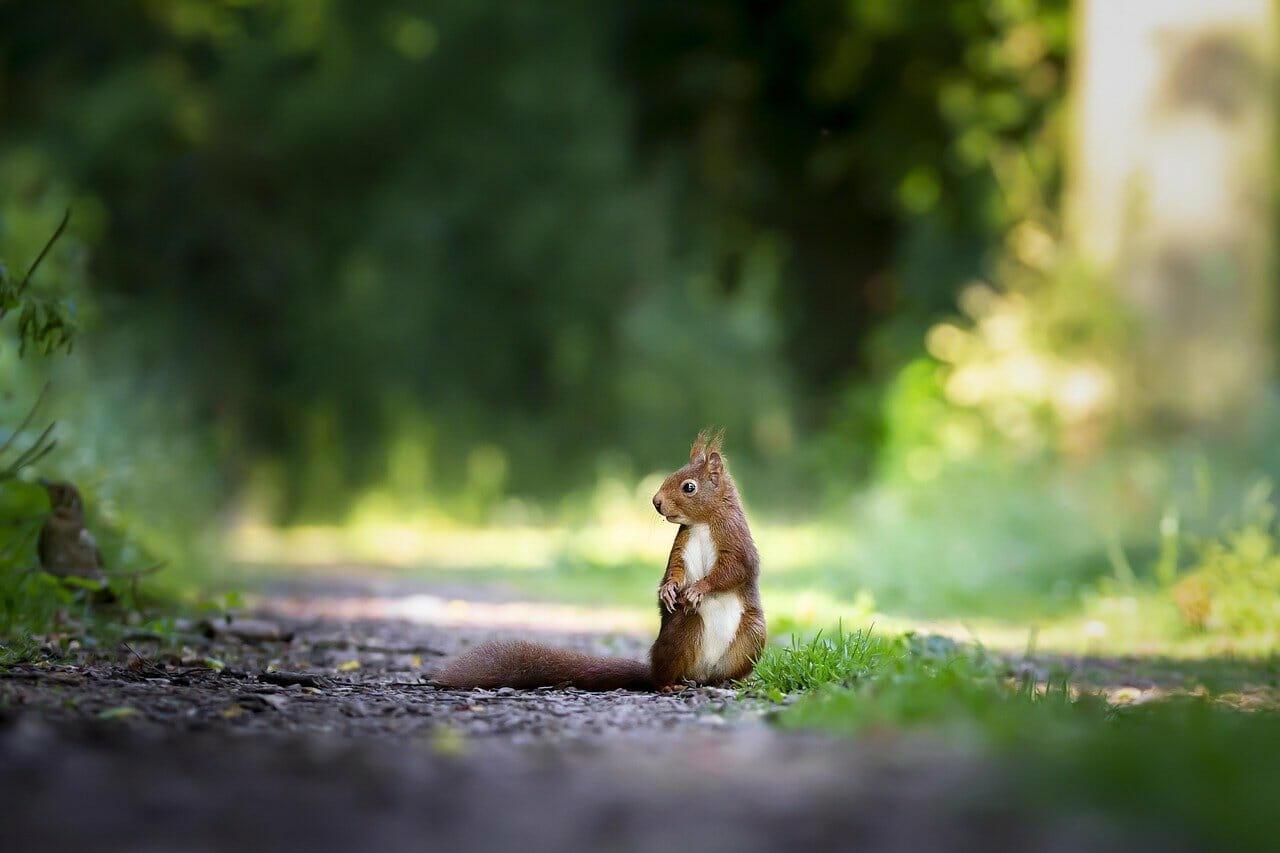 Squirrels are one of the most unwelcome yard visitors around. They gobble up gardens, gnaw on patio furniture and leave food debris.

Many homeowners fantasize about enacting the ultimate revenge on the pesky visitors. But is shooting them taking it too far.

Most places allow the capture and killing of nuisance wildlife on private property. However, most cities have prohibitions regarding the discharge of a firearm within city limits. Be sure to check the rules near you, and make an alternate plan to dispose of the unwelcome guests.

Squirrel shooting is generally allowed, but the exceptions could get you in trouble. Read on to learn the ins and outs of eliminating backyard squirrels.

Is It Illegal To Shoot Squirrels In Your Backyard?

Whether it is illegal to shoot a squirrel in your backyard is very dependent on where you live. It is actually pretty likely you can kill a squirrel; shooting it is another story.

Most states allow for the trapping of nuisance wildlife. Nuisance wildlife are non-domesticated mammals that enter into private property and do some type of damage.

Do keep in mind that there are different types of squirrels, and not all of them are safe for shooting or killing. Here are some different designations that states have that anyone trapping or killing a squirrel should know about:

Many states differentiate between flying squirrels, tree squirrels, and ground squirrels. These states allow only one or the other to be killed.

Additionally, states may require a permit before killing the animal, even if it is a nuisance. Iowa actually requires a permit for the killing of any wildlife, even squirrels, outside of the usual hunting season.

Be Knowledgeable About Gun Laws In Your Area

Finally, the other big issue in this scenario is how to kill the squirrel. Cities and states regularly enact laws and ordinances that make it illegal to discharge a firearm within city limits or near any structure or vehicle.

Quickly killing a squirrel with a gun is certainly more humane than poisoning it or otherwise killing it slowly. That makes finding an alternative challenging.

One option is to trap the squirrel and release it into a less populated area. If you choose this, be sure to research whether there are any restrictions in your area.

Taking the time to do this is definitely better than the consequences of illegally discharging a firearm. States across the country have enacted hefty penalties for the careless use of guns.

For example, in Colorado, those who recklessness or knowingly shoot into a structure can be charged with a Class 5 felony. This translates to 1-3 years in prison and a fine of up to $100,000.

In Hawaii, it is reckless endangerment to shoot a gun in a residential area. Colorado and Hawaii are just a few examples; every state has this type of law in place.

If the squirrel that you are thinking of shooting is on a fence line with neighbors, think twice before pulling the trigger. If you happen to live in a school zone, put down the gun and check out the other options below.

How To Humanely Get Rid Of Squirrels? 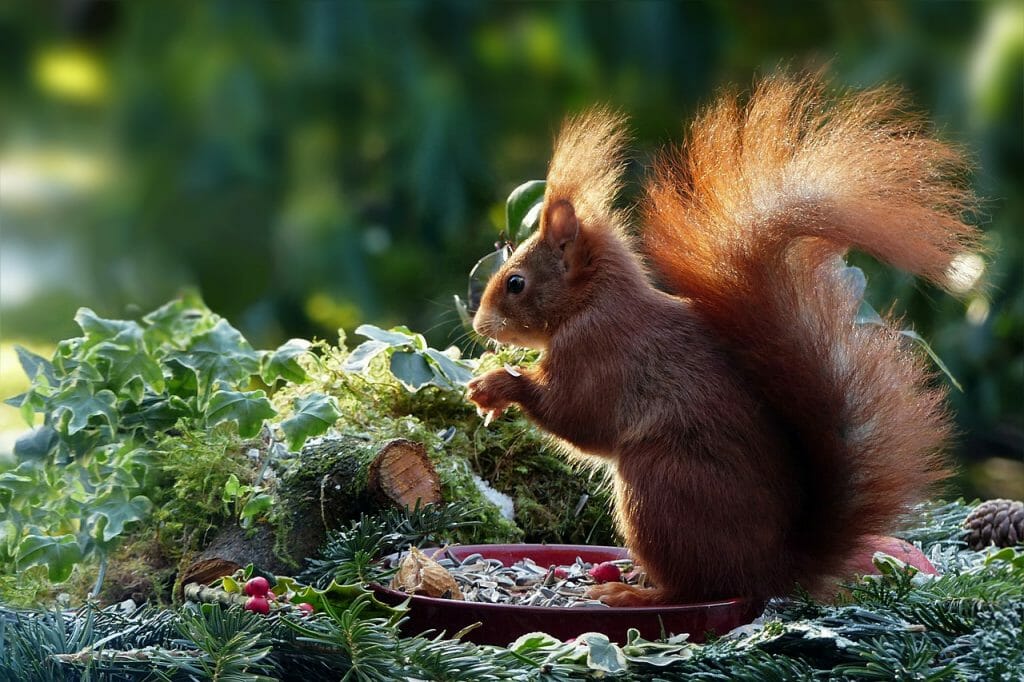 Rather than trapping and killing the squirrels, there are several ways to get them to move on from your yard. After all, where there is one squirrel, many more will follow, and deterrence solves the problem in the long run.

Squirrels come into human space for all the tasty, low effort food they can find. Make the bird feeders squirrel-proof and make your garden off-limits with chicken wire or cloches.

Lure Them To A Different Area

If you can’t beat them, join them. Keep squirrels away from the garden or house by setting up an easy-to-access squirrel feeder far away from those areas. If a squirrel has plenty to eat from a feeder, it will not care about the other things.

Can I Kill A Squirrel On My Property?

Some states require a permit before killing a squirrel, even if it is on your own property and being a nuisance. Others allow for immediate killing as long as it is actively destroying property.

Is It Legal To Shoot Squirrels With An Air Rifle?

Many hunters enjoy using air rifles for squirrel hunting. If it is legal in a location to shoot a specific type of squirrel with a regular gun, it will also be legal to use an air rifle.

Many cities have ordinances that restrict the use of air rifles within city limits or within a certain number of feet of other people. Whether it is legal to shoot a squirrel with an air rifle is highly dependent on the location of the squirrel.

Is It Illegal To Shoot Squirrels In Your Backyard In California?

California classifies ground squirrels as non-game animals. This means they can be killed anywhere at any time.

Even though it will be legal to kill these squirrels, any local restrictions regarding firearm discharge must be followed. California is very specific regarding the killing of squirrels if captured by trapping.

If you are planning to trap the squirrels before shooting them, be sure to read through California law carefully. Only traps used and tracked by the Department of Fish and Wildly.

Traps must be checked at least once per day. Trapped non-game animals like squirrels must be immediately released or euthanized.

Trapped animals that are not released must be killed by shooting unless a local ordinance prohibits shooting.

Is It Illegal To Shoot Squirrels In Your Backyard In Michigan?

Michigan has many laws in place regarding squirrels, so this is another state where the homeowner needs to be careful before shooting.

A valid hunting license is needed for the taking of red and gray squirrels year-round. Other squirrels may also be killed outside of squirrel hunting season if it is causing damage. In this scenario, a special permit is needed.

Is It Illegal To Shoot Squirrels In Your Backyard In Texas?

As you may imagine, Texas has fairly lax squirrel-killing laws that favor the protection of property. Any number of nuisance squirrels may be killed at any time and in any manner.

No hunting or trapping license is required. However, the squirrel pelt may not be saved or retained unless the hunter has a license and it is done during that animal’s trapping season.

Is It Illegal To Shoot Squirrels In Your Backyard In Florida?

Florida’s squirrel hunting laws are quite similar to those of Texas. Any property owner may take nuisance wildlife on their property.

Florida does place the burden on the owner to be aware of the surroundings. Unlawful discharge of a weapon, including in residential areas, is a criminal offense in Florida.

Anyone planning to shoot a squirrel in that state should be careful to avoid rights-of-way, other homes, streets, and any public places.

Is It Legal To Shoot Squirrels In Your Garden?

Given that most states allow for the killing of nuisance wildlife, it is likely legal to shoot squirrels in the garden. Nuisance animals are those that destroy property, and the garden is particularly susceptible to squirrels.

It may not be legal to shoot a squirrel in your garden without a permit. Additionally, some types of squirrels are protected in some states, even if they are a nuisance.

If you have any doubts about whether it is legal in your area, contact local law enforcement. 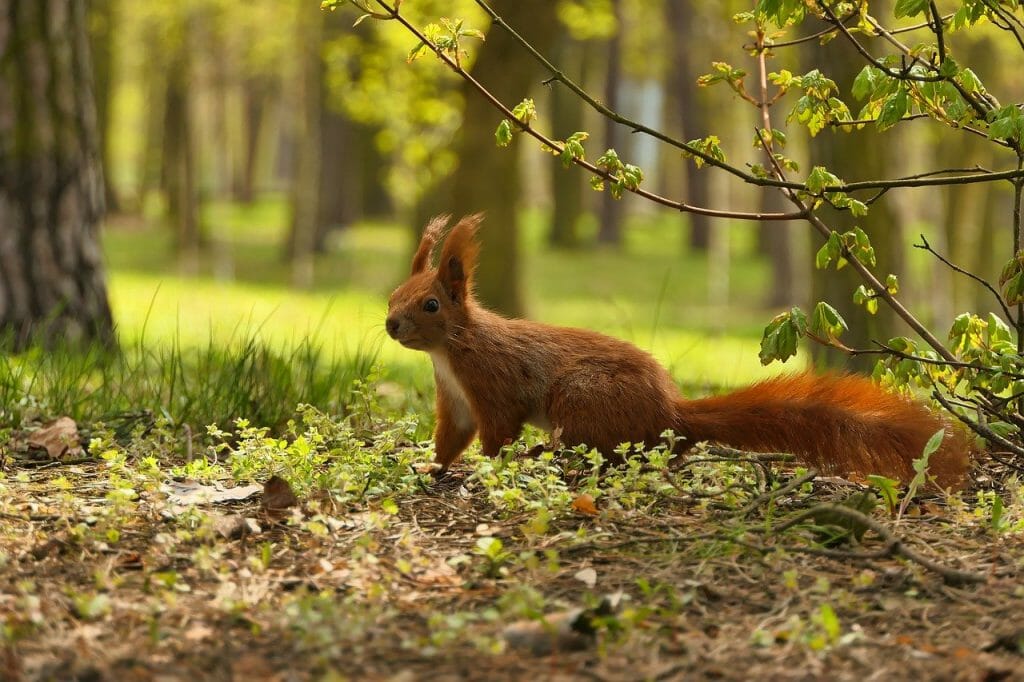 Squirrels can be a real pest, and for many people, getting out their guns seems like the best way to get rid of the nuisance. Because most states actually define squirrels as nuisance wildlife, that may actually be legal.

Before shooting, always be sure that the squirrel in question is not a protected type in your state. Also, confirm whether a permit is needed where you live.

Most importantly, make sure that it is legal to discharge a firearm in that location. Failure to do so could end in a mandatory prison sentence if you are caught.

If you do live in an area where you cannot legally and safely shoot a gun, there are plenty of other options available. By removing or relocating the squirrels’ food source, you can easily shift them away from your garden.