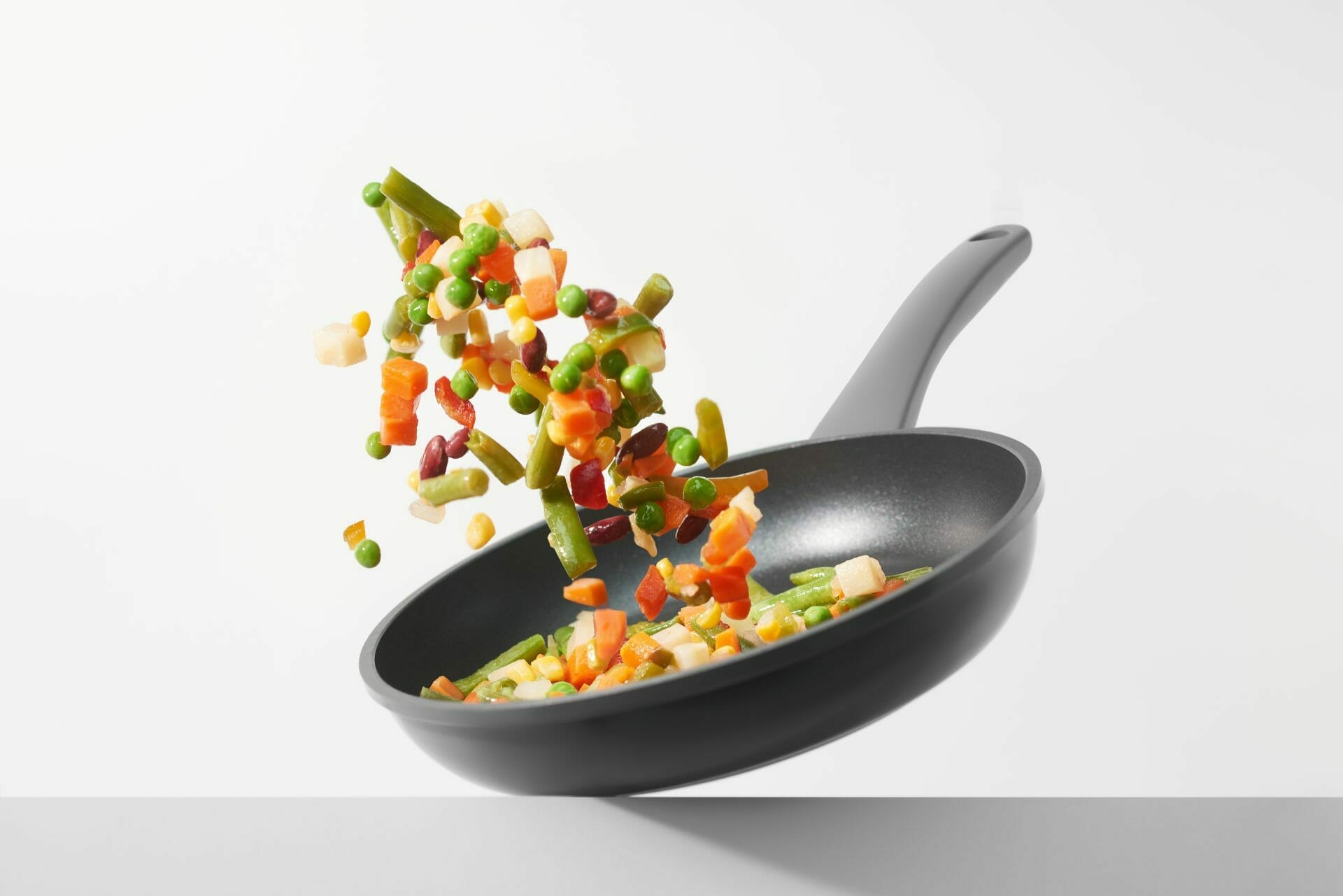 Anyone who cooks knows that it can be a pain to have to use butter or oil in the pan every time you prep for a meal.

The creation of non-stick pans helps to speed up the process and lessen the amount of oil used in the prepping of the meal.

In the long run, this helps decrease the amount of exposure to oils and fats for the body to have to consume.

As well as saves the amount of product so that it can last longer. Nifty, huh?

Generally speaking, GreenPan cookware is not safe to use, according to various experts and lawsuits found online. However, there seem to be differing opinions as lawsuits arise towards the company for using Thermolon ™ while other sources believe it to be perfectly safe.

Let’s get a deeper look into GreenPan products, the differing opinions, and why it’s ultimately not safe to use.

Are GreenPan Products Safe to Use?

Given the false advertisement on the company’s website about their products and the lawsuit regarding these advertisements, GreenPan is not safe to use.

Mostly because there is a lack of trust in false advertisements and the materials that are used within the coating of Thermolon™.

Upon further study and research, two sources back up this claim that should be noted.

Leaf Score, an article that is written by a blogger that focuses on unpacking the reviews, studies, and lawsuits regarding GreenPan’s Products.

Further, reputable sources such as the San Diego Consumer Network report that within a few months of use, the cookware starts having food-sticking issues.

Reviews from people claim that a) the nonstick factor in GreenPan’s products starts wearing down with daily usage b) a weird odor emits from the coating and c) a weird smell emits from the handle.

Of course, these reviews are selected and pulled from a handful and do not mention the positive reviews that are available online as well on Amazon.

However, due to the lawsuit against them despite it being dismissed due to a settlement being reached, some concerns are raised against the products having toxins that are bad for human consumption.

Is GreenLife Pan Safe to Use?

GreenLife Pan, along with other products, should be avoided, but websites claim its capability to be put in the oven, as well as the broiler and the dishwasher.

One reviewer claims that there are more pros than cons, with one of them being an advocate of Thermolon™ as non-toxic and healthy to use for users and another as the pans not lasting long.

There seems to be a consensus surrounding these products not lasting for a long time.

Technically speaking, according to the company and other reviews, this product is safe for the oven despite other reviews claiming that it’s not 100% toxic-free.

If you do choose to use the product despite the potential harm from toxins, do not put the heat higher than 360 degrees Fahrenheit as this will cause harm to the handles of the product. Especially because they are not made from the same material as the base of it.

Is GreenPan Safe for the Oven?

In general, it’s best to avoid using GreenPan products, due to the many safety concerns around the coating they use.

However, other sources claim that their products are safe to use when precautions are taken.

For example, both the company GreenPan and reviewers state that GreenPan is generally safe to use in the oven if it’s not exposed past a certain heat.

Why? Well, according to the company and reviews, Thermolon™ is not the only product used in making their pans.

Other parts of their products could be more temperature resistant. So, in this case, the question of “safety” is accompanied by the concern of whether the heat will ruin the pan and the quality of food.

Not at all in relation to the potential chemicals that are found within the product itself.

Again, because of the type of material used in the making of the coating – Thermolon™ – we recommend staying away from the products, themselves.

Without taking into consideration the concerns around the coating of these nonstick pans, GreenPan is dishwasher safe.

So, don’t worry about using the dishwasher although even the company recommends handwashing.

This way, the harshness of the dishwasher does not chip away at the coating of the pan, itself.

In general, this applies to most non-stick pans as they have a coating that prevents food from sticking to the pan.

Is GreenPan Safe for the Birds?

According to the company, itself, it recommends highly keeping both pets and birds away from the kitchen when cooking.

As a result of this claim, a series of questions has been raised: such as why birds and pets need to be away from the kitchen when you’re cooking if the pan is safe and toxin-free?

Then, on the other hand, another website that asks if GreenPan is safe for Parrots, claims that it’s popular among Parrot owners.

So, it can be difficult to discern what’s facts from fiction because they do not provide enough information or evidence regarding their products.

Is It Safe to Use a Scratched GreenPan?

While the company claims that it is okay to use a scratched nonstick pan, you should never use it!

Why? Because some of the flakes of the scratched parts, when heated, could end up in your food and poison you over time.

Even if this does not happen immediately, toss it, and purchase another one because this is not healthy to use in terms of cooking your food.

A lawsuit has been filed against GreenPan for the false advertising of their products being 100% toxic-free.

There is a consensus that yes, their writers seem to be a little enthusiastic regarding how they depict their products.

Such as the examples that have been discussed regarding their non-toxic material, which a lot of products possess.

But their writers state that this is what helps distinguish their products from other companies.

Other problems and concerns that arise because of how they advertise their products include the overall broad, general claims regarding the health of those that use the pans. As well as what they can do for the environment.

Overall, the reviews on sites such as Amazon are positive. However, it’s important to take into consideration that there are some concerns with the level of consistency of quality of GreenPan’s products.

Others oftentimes smell this weird burning smell that reminds them of burnt plastic.

These are obvious concerns that need to be taken into consideration when using products such as this because you wouldn’t want to expose yourself or your family to potential chemicals that come from the heating of the coating of Thermolon™.

What Are GreenPan Products?

GreenPan is a specific company that sells cookware that uses Thermolon ™ coating for most of its products.

Thermolon ™ is mentioned because this is what differentiates GreenPan from other cookware products that provide the same advantages of using non-stick pans.

Since the main ingredient that makes up GreenPan’s nonstick coating is silicon, many consider the product toxic.

Let’s discuss other ingredients that could potentially make the products toxic to be able to understand the claims against the company’s cookware.

The main concern when it comes to GreenPan products is the way that they advertise them on their website.

For example, it’s generally known that the purpose of non-stick pans is to help cooks prepare meals without using butter or oil every time they cook. GreenPan advertises this as if it’s a distinguishing factor.

An example of this would be using the statement “unlike traditional non-stick cookware” in comparing other non-stick pans that use toxins in the material of their coating.

Another statement upon which GreenPan lacks to provide any factual evidence to back up the claim is the following: GreenPan claims its products are eco-friendly, primarily due to production practices.

Apparently, these practices state that up to 60 percent less carbon dioxide is emitted during the curing phase of the making of Thermolon.

While this is a valiant claim, there is no evidence to support it, so users could claim false advertisement.

In short, while GreenPan is technically safe to use in the dishwasher, oven, and broiler it is not a recommended product due to the false advertising and lawsuits made against their company.

There are conflicting messages that can confuse consumers, and it’s important to note the way that they advertise themselves against their competitors.

As if they’re emphasizing the necessities that are supposed to come with nonstick cookware as the highlight of their product.

Overall, whenever you’re purchasing a brand-name product, be sure to research reviews.

And if you do decide to try it, follow the guidelines necessary to ensure that the quality of the product is maintained, as well as the food being prepped. You may be interested in our post about Is Sevin Dust Safe