Is Royal Icing Safe to Eat? [For Pregnant Women & Kids] 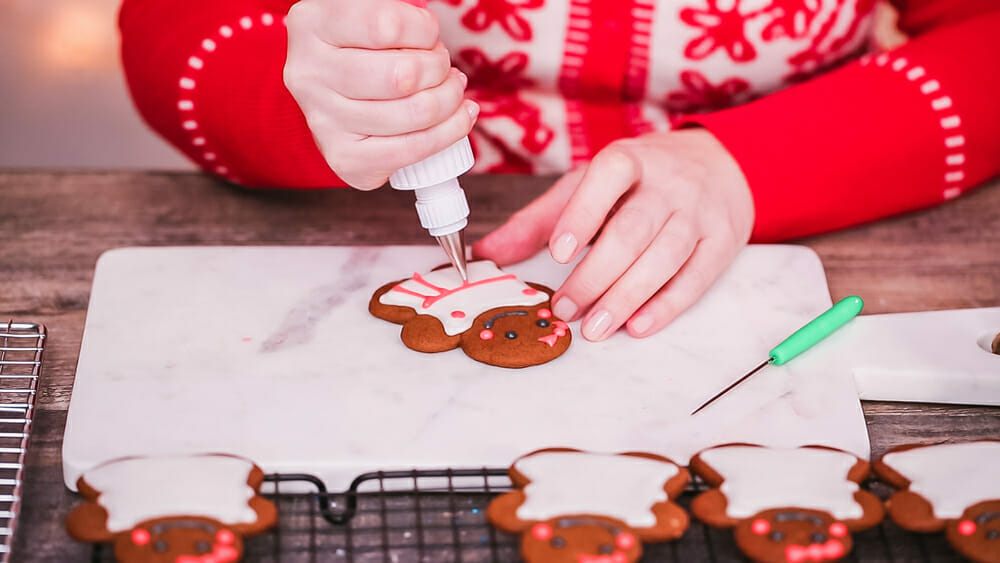 When it comes to food safety, you probably think of safe food storage, washing your hands after cooking raw meat and cooking chicken to 165 degrees.

You probably wouldn’t think that the icing on top of your favorite cakes could be potentially dangerous, but there are some things to take into consideration, especially if you’re pregnant or otherwise at higher risk of getting sick.

Royal icing is a popular icing for topping cookies, cakes, and other baked goods.

Egg whites are a standard ingredient, so you might be wondering if royal icing is safe to eat, especially for high-risk people like pregnant women.

Royal icing can be made with raw egg whites, which aren’t considered safe for pregnant women, young children, and other high-risk individuals due to the risk of salmonella food poisoning. However, you can safely enjoy royal icing if it’s made with pasteurized egg whites, meringue powder, or egg-free versions of this popular icing.

DISCLAIMER: While this information was prepared by a certified dietitian, it is NOT a medical advice. Please consult your own medical professional before altering your diet. The information is strictly for educational purposes.

What is Royal Icing?

Royal icing is a type of icing used to top cakes, cookies, biscuits, and other types of sweet treats.

Royal icing is unique because it starts out soft and then hardens into a candy-like finish once it’s cooled, which makes for more attractive baked goods.

For example, a standard quick icing recipe (not royal icing) contains powdered sugar, milk or cream, and vanilla extract, which are all safe ingredients when stored correctly.

Is Royal Icing Safe to Eat During Pregnancy?

The concern with royal icing during pregnancy is the risk of salmonella bacteria from raw or undercooked eggs used in the recipe.

According to the Centers for Disease Control and Prevention:

Salmonella is a type of bacteria that can get on the shells of eggs when birds lay eggs or when the eggs touch bird droppings after they are laid.

This usually isn’t a problem for commercial eggs (those you buy at grocery stores) because companies wash the eggs before they reach stores.

Salmonella also can contaminate the egg’s contents while it is forming inside the chicken before shells are formed.

A lot fewer egg-laying hens have this problem today than during the 1980s and 1990s, so eggs are safer. But some eggs are still contaminated with Salmonella.

Getting salmonella poisoning during pregnancy can lead to dehydration and other potentially dangerous issues for both mom and baby.

To practice safe eating habits during pregnancy, you shouldn’t eat royal icing made with raw or undercooked eggs.

Instead, make icing with meringue powder or liquid pasteurized egg whites in a carton.

There isn’t a limit on how much royal icing you can eat during pregnancy if it’s made with safe eggs. The texture of royal icing doesn’t impact its safety either.

Safe Egg Types to Use in Royal Icing During Pregnancy

Any type of raw egg, regardless of the brand, carries a risk of carrying salmonella.

Eggs from backyard hens or otherwise not commercially produced can carry a greater risk of salmonella because the shells might not be washed thoroughly.

This ready-to-use icing sets up quickly, which means it will harden and be a great alternative to royal icing.

It doesn’t contain any eggs and is shelf-stable, so it’s safe to eat for high-risk people like pregnant women and children.

This icing mix contains dried egg whites, which are heated to remove any potential bacteria that could be harmful during pregnancy.

Simply add water to the mix to use it to top cookies and use for other baked goods.

You don’t have to worry about the safety of this royal icing recipe because it doesn’t contain any eggs, which also makes it suitable for vegans or those with egg allergies.

How do you pasteurize egg whites to make royal icing?

It’s estimated that only one in 20,000 commercially produced eggs contains salmonella bacteria, so home pasteurization methods help reduce that risk even more.

If you can’t find pasteurized egg whites then you can pasteurize them yourself, though it isn’t a guarantee that you’ll remove all potential foodborne pathogens.

This method of home pasteurization brings the temperature of eggs to 138 degrees Fahrenheit.

Bringing the temperature of egg whites to 160 degrees (the recommended temperature for food safety) will cook the eggs.

Here are the steps to pasteurize your own eggs at home to make safe royal icing (courtesy Sugar Geek Show blog):

Place the eggs you want to pasteurize into a medium-sized saucepan in an even layer. Cover with water so that there is 1″ of water above the eggs.

Then remove your eggs. You don’t want them in there until your water is at the right temperature.

Heat the water to 140ºF using a thermometer to monitor the temperature. Any warmer than 142ºF and you’re going to cook your eggs.

Place your (room temperature) eggs in the water. Heat the eggs for 3 1/2 minutes. Make sure the temperature of the water never goes above 142ºF or you will cook your eggs.

Transfer your pasteurized eggs into a bowl of cold water to stop the heating process. Then store them in the fridge to use later! That’s it!

Is Royal Icing Safe for Kids to Eat?

Babies and young children are especially prone to developing complications from foodborne illnesses like salmonella.

You should avoid giving royal icing with undercooked or raw eggs to young children, and there isn’t a specific age when it’s considered safe.

The recipe for royal icing for pregnant women (listed above) is a good alternative for kids as well.

All considerations for pregnant women are similar for young children when it comes to royal icing safety.

Is Seven-Minute Frosting Safe to Eat?

Seven-minute frosting has been around since the 1900s, according to King Arthur Baking Company.

If the egg whites get heated to at least 160 degrees Fahrenheit during the process of making seven-minute frosting, then it’s safe to eat.

When in doubt, use pasteurized egg whites in a carton which are safe to eat even if they don’t reach a temperature of 160 degrees.

Is Meringue Frosting Safe to Eat?

Meringue frosting is similar to royal icing because it also contains egg whites.

Unlike royal icing, meringue frosting is heated beyond 160 degrees Fahrenheit, so it’s safe to eat during pregnancy and for other high-risk people.

How Long is Royal Icing Safe to Eat after Making It?

Royal icing made with raw egg whites can be stored in the refrigerator for one week.

If royal icing is made with meringue powder it can be kept at room temperature for up to a month.

Is Meringue Powder Safe to Eat?

Meringue powder is made with pasteurized egg whites, so it’s safe to eat.

Eating royal icing with raw or undercooked egg whites carries a risk of foodborne illness, which can be more serious in high-risk people like kids and pregnant women.

Royal icing is safe to eat when it’s been made with pasteurized egg whites or meringue powder.