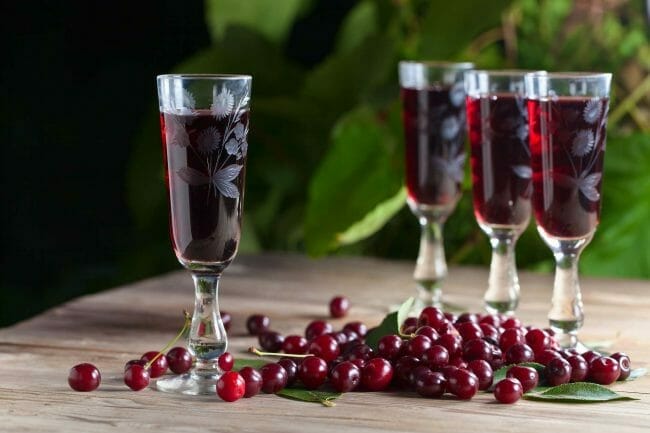 It is incredible how many recipes use kirsch. It is a main ingredient in black forest cakes, it is added to fondue and it is in too many cocktail recipes to count.

But what if you don’t have any kirsch on hand? How can you make that tasty clafoutis without it?!

Don’t worry! We can help you find the best kirsch substitute for any recipe. No need to run out and buy a bottle of kirsch when you have this handy list of kirsch replacements.

On the other hand, when making fondue, white wine and lemon juice will be better substitutes. Finally, when baking, use apple cider and Maraschino cherry juice to add flavor in place of kirsch.

But what is kirsch anyway? Kirsch is a type of brandy that is distilled from fermented cherry juice. It is strong, potent alcohol that has a lovely cherry flavor.

Kirsch is not dyed or colored so it is completely clear. It is actually called “kirschwasser” in German which simply means cherry water. It does look a lot like water!

Kirsch is often used to enhance the cherry taste in baked goods. It adds cherry flavor to cocktails and can help give a tangy but sweet taste to other recipes as well. Now that you know all about kirsch, you will see it in recipes everywhere!

What Can Be Used Instead Of Kirsch?

We are here to talk about what to do if you don’t have kirsch on hand. There are lots of ways to replace the simple ingredient and have fantastic results.

Get ready to create some delicious foods and drinks without ever having to pour a drop out of that kirsch bottle.

You don’t need kirsch to make classic, tasty treats! Let me tell you all about the best kirsch substitutes so you can get back to your culinary projects.

How To Choose The Best Kirsch Substitute

There are actually a lot of great substitutes for kirsch. When deciding which to use, think about what the kirsch does in the recipe. Are you using the kirsch for its great cherry taste?

Then you should use a substitute that also has a cherry flavor. Is the kirsch in a recipe to simply add fruity alcohol? Then pick a kirsch replacement that is alcoholic and sweet.

I have divided the kirsch substitutes into categories:

Scroll right to the section you need to help you easily find which kirsch substitute you need!

Kirsch Substitutes For Cocktails And Drinks

When replacing kirsch in drinks and cocktails, you want a liquor that tastes almost the same as kirsch. You will be able to taste the cherry flavor of the kirsch in a mixed drink so you want to be sure to mimic that flavor.

You also want to use alcohol that is just as strong as kirsch. Here are some of the best kirsch substitutes for cocktails and drinks.

Grappa is a type of Italian brandy. While kirsch is made from fermented cherries, grappa is made from grapes. Grappa is just as strong as Kirsch so it is a good substitute in drinks.

It has a little more mild flavor but blends into drinks very well. You may even want to sip a glass of grappa all on it’s own!

Framboise has a very strong raspberry taste that is similar to the cherry flavor of kirsch. Framboise will also make your drinks a pretty pink color.

Tuica is a Romanian liqueur made from fermented and distilled plums. Since it is made from fruit, it is considered to be a brandy, just like kirsch! Tuica has a fairly mild flavor so it will not overpower a mixed drink or cocktail.

It will add just the right amount of fruity taste and replace kirsch perfectly.

Kriek lambic is a type of beer made with sour cherries. Since kriek lambic has a strong, cherry flavor, it is great for replacing kirsch in drink recipes.

Using kriek lambic will keep the cherry taste in the drink but also give your cocktails a little bit of a fizz. The Belgian beer is a great substitute for kirsch!

Cognac has a nice fruity taste that can work very well in drinks when you need to replace kirsch. A good cognac is nice and smooth which can really help improve your cocktails.

If you have cognac but you’re all out of kirsch, don’t worry! Your drinks may turn out to be even more delicious. 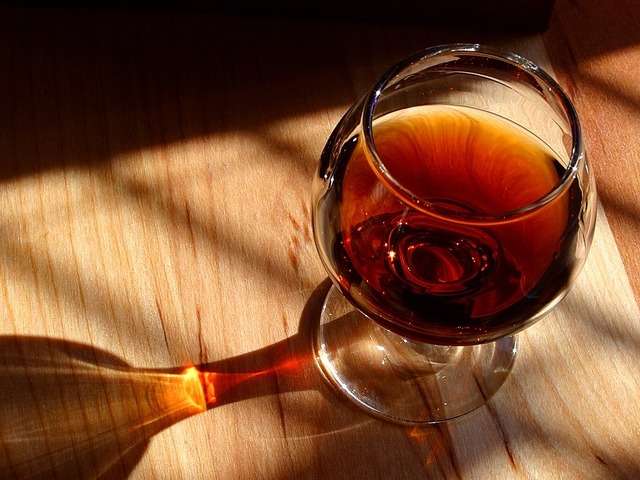 Need to make a cherry-flavored mixed drink but you don’t have any kirsch? Replace kirsch with some cherry juice and vodka.

Replace the quantity of kirsch with vodka then add a splash of maraschino cherry juice. This makeshift kirsch will work well!

Kirsch has two main jobs in fondue. First, it adds a nice tangy flavor to the otherwise heavy, hearty dip.

Second, it helps emulsify the cheese, keeping it soft and preventing it from separating when melted. Here are a few substitutes for kirsch that will work in a fondue recipe.

A little bit of white wine will help make your fondue smooth and soft. It will easily replace kirsch to make the fondue creamy and have an interesting flavor.

Many of us may have a bottle of white wine on hand but not a bottle of kirsch so this is a convenient replacement!

Cooking wine can last quite a while in the fridge so you can keep this kirsch substitute chilled and ready to use!

White vermouth is an aromatic, herbed wine made primarily in France and Italy. A good sweet white vermouth will add a lot of flavor to fondue while also helping keep it smooth. While vermouth isn’t quite as fruity as kirsch, it will definitely get the job done!

A little bit of lemon juice will cut the heavy, fatty taste of fondue. It is a fantastic non-alcoholic substitute for kirsch.

The bright flavor of the lemon is similar to the powerful tangy of kirsch making it a perfect kirsch alternative.

Kirsch is a wonderful liquor to enhance the flavor of fruity desserts. It pairs well with almost any fruit flavor!

When finding a kirsch alternative for cooking and baking, you want to find a substitute that has a fruit taste as well.

You don’t want to lose that bright, strong flavor! Here are our favorite kirsch replacements for baking.

Cherry juice clearly has a very strong cherry taste- of course! This is perfect to use in baking and cooking projects that really need the cherry flavor.

Maraschino cherry juice can be used in a German black forest cake, for example, which relies on the flavor of cherries.

If you need a kirsch substitute but still want the flavor of cherry, try using cherry juice instead.

Cider has a very fruity flavor without any of the liquor in kirsch. It adds a warm spice to your baking and cooking as well.

Apple cider is also a lot cheaper than a bottle of kirsch making it a nice, economical replacement for kirsch. 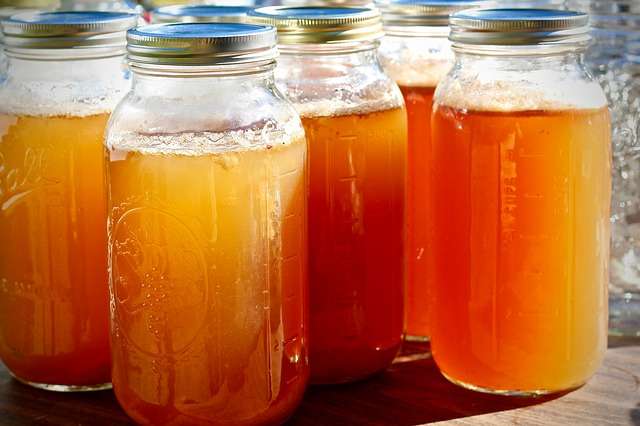 Kirsch is a cherry brandy. A peach-flavored brandy is a great, fruit brandy replacement for kirsch.

Peach brandy is a little sweet which is good for keeping the flavors of your cooking and baking consistent. You can easily find peach brandy in any liquor store making it very convenient and tasty.

Calvados is a sweet, apple brandy that can be used to replace kirsch in any recipe.

Both calvados and kirsch will work the same in baking since they have about the same alcohol content. A bottle of calvados will not go to waste (it’s pretty tasty on its own, too!).

There are many reasons why you may want to replace kirsch in recipes. One great reason to use a kirsch substitute is to make your drinks and baked goods a little healthier.

Kirsch contains alcohol which can have negative health impacts.

If you want to abstain from drinking or cooking with liquor, use a non-alcoholic kirsch substitute.

Apple cider, lemon juice and maraschino cherry juice are our favorite alcohol free kirsch replacements. They will give you lots of flavor in a healthier, more nutritious way!

There are so many great substitutes for kirsch that you can easily find something to use in place of the cherry brandy.

Whether you are making cheese fondue or a black forest cake, you can find the perfect kirsch replacement for sure!

You may even like a few of these kirsch substitutes even better than the original liqueur. Cheers and enjoy!