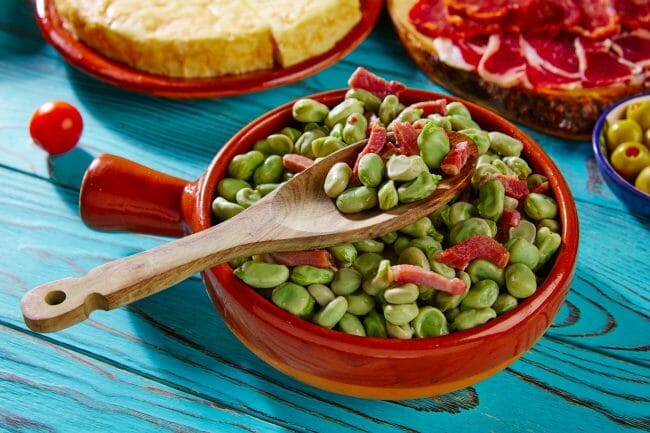 I’ll Be Honest: I’m A Pantry Hoarder. If you need noodles, I have a wide variety you can choose from.

Different shapes, colors, and vegetable noodles, chickpea noodles, any kind of noodle you could dream of- I have in my pantry.

I wanted to make succotash, which called for the one bean I didn’t have a stockpile of available – lima beans. Succotash is a mixture of sweet corn, lima beans, and veggies.  Thankfully I had a pantry full of substitutes readily available.

Generally speaking, marrow beans is the best substitute for vegan and vegetarian dishes. If you want to swap lima beans in chili, use red kidney beans instead. Best gluten-free “superseed” to use in salads is quinoa or pinto beans that emulate the taste and texture of Lima beans

All beans and legumes are naturally gluten-free, meaning every one of these substitutes except for couscous are gluten-free!

If they’re so healthy, why would you substitute them? It could be as simple as a taste preference.

Not everyone likes the taste or texture of lima beans. Some that dislike lima beans say it has a “chalky texture.”

Other people have food allergies. They may be allergic to lima beans and be looking for a replacement ingredient that they can enjoy.

Some may want to reduce the starch. Fava beans or edamame may be a better option for those who aren’t a fan of the starchy consistency of lima beans.

1. Chickpeas – The Same As Garbanzo Beans – Best For Homemade Hummus

Chickpeas have a similar taste to Lima beans, making them a great substitute. You can even shorten your time in the kitchen by buying chickpeas that have already been boiled. They are naturally gluten-free substitutes.

Chickpeas are the main ingredient to hummus- so if you have these at home you could try your hand at making hummus from scratch. They are most commonly used in Mediterranean dishes.

Also referred to as garbanzo beans, chickpeas have a firm texture. You can use these beans as a replacement in any recipe that calls for Lima beans.

If you use canned chickpeas, save the liquid that the beans are soaking in. It’s called aquafaba and it is a great egg substitute! This “super-liquid” is cheap, too. It’s basically free!

Marrow beans are interesting and may be fun to experiment with. They are small white beans with a creamy texture, similar to a great northern bean.

Their texture has also been described as meaty. However, unlike other beans, marrow beans are known to have a taste similar to bacon.

These beans would also be a great addition to vegan or vegetarian dishes.

Pinto beans are another replacement that does a good job at emulating the taste and texture of Lima beans.

In Spanish these beans are called judías pintas, which means “speckled bean.” Pinto beans are the most popular beans in Northern Mexico and the Southwestern United States.

They are cooked and seasoned the same way as Lima beans. The only noticeable difference is the color, which is just a bit darker.

Pinto beans serve as a good replacement in baking recipes as well as stews, salads, and stir fries.

These beans may not taste or look exactly like Lima beans, but hear me out: they are even better than Lima beans and make a good replacement.

They are perfect to add to stews and chili. They are cooked the same way as lima beans, making it easy to use them as a substitute.

This bean has a variety of different nicknames. It is known as the cranberry bean, the Roman bean, the rococo bean, the saluggia bean, and several others. Its color is magenta and tan with hints of red and black.

These beans are common in Italy and Mexico. They are similar to pinto beans and red kidney beans, but they make a good substitute for lima beans as well. They go great in stews.

Fava beans are one of the best beans to use to replace lima beans. Unlike the other beans, these can be eaten raw. You’ll want to eat them without the peel, though.

Without the peel, fava beans have a similar taste and texture to lima beans. Similarly to other substitutes, they also cook the same way as lima beans.

Fava beans are less starchy than lima beans, with an added sweetness to the nutty flavor of lima beans.

Some even describe the taste as having a hint of cheese. Although they go great in salads and soups, they are often served by themselves as a side.

Soybeans are used for everything. Without soybeans, I wouldn’t have my favorite vegan nuggets. Soybeans are native to Eastern Asia.

Soybeans are used to make tofu, soy sauce, soybean oil, and many other products. They are extremely versatile, making them a good choice for a substitute.

Unlike the others, soybeans need to be cooked longer than lima beans due to their tough texture.

If you cook them a little longer, you can achieve the same texture as lima beans. Soybeans are good in baked goods, stir fries, and salads.

Edamame beans are immature soybeans that are cooked in their pods. They can be boiled or steamed.

This replacement won’t taste exactly the same as lima beans, as edamame beans are a little sweeter, but they will still taste great.

Navy beans, also known as Boston beans, go great in baked dishes. These are smaller than many of the other white beans.

They are better for your heart due to its low cholesterol. They are also packed in fiber. Instead of using lima beans, try navy beans.

Their creamy flavor stands out, which would make them a great ingredient to use in a soup recipe that calls for lima beans.

The navy bean’s other nicknames are haricot, pearl haricot bean, pea bean, or white pea bean, which is referencing its tiny size.

However, unlike the red kidney bean, the white kidney bean won’t alter the look of the dish with its color.

White kidney beans, also referred to as cannellini beans, have a nutty flavor, so you can expect to taste hints of that if you do use it as a replacement.

White kidney beans have a firm texture, so in order to acquire the softer texture of the lima bean, you will have to cook them longer.

They are great in soups and salads. White kidney beans are an excellent source of plant-based protein and are also rich in vitamins and minerals.

Unlike the other lima bean substitutes, quinoa is not a bean. It is often referred to as a grain, but it is actually a seed.

Quinoa is a common substitute for rice, however, it also works for some recipes that call for lima beans. This “superseed” is great to use in salads, but I wouldn’t recommend using it for soups.

Quinoa soaks up liquid so it wouldn’t provide the effect you might be hoping for. The taste and texture are not exactly identical to lima beans, but it still is a good replacement.

Couscous is a dish originating from North Africa. It is essentially tiny balls of pasta that is usually served with stew on top. Couscous isn’t cooked the same as many of the other replacements.

If you boil it in water for a few minutes you’ll be good to go. Couscous is great for stews and salads, but not soups. If used in soup, the couscous would lose its firm texture and potentially get soggy.

What Are Lima Beans?

Lima beans are commonly called butter beans, but they have many other names. They are also called wax bean, Madagascar bean, chad bean, Northern beans, and double bean.

It is a legume with edible seeds or beans. The term “Lima beans” comes from Lima, the capital of Peru.

They come in different sizes- “butter beans” often referring to larger ones. The smaller ones are called “baby limas.” These beans have a soft texture with a nutty taste.

They are extremely versatile and can be used in a variety of recipes, from soups, to salads, to dips. You can even serve lima beans as a side dish by themselves.

Lima beans are considered a superfood. They have a ton of nutrients, including protein and fiber. One cup of Lima beans is about ¼ of your daily recommended iron intake.

Lima beans are great for digestive health, heart health, diabetes control, and it can prevent anemia.

Some other important nutrients that can be provided by Lima beans are Vitamin B1, Folate, and Phosphorous.

Any of these twelve ingredients can be used in place of lima beans, and some ways may even taste better.

Some options may be healthier, or you may just have different beans on hand than the lima beans that the recipe calls for.