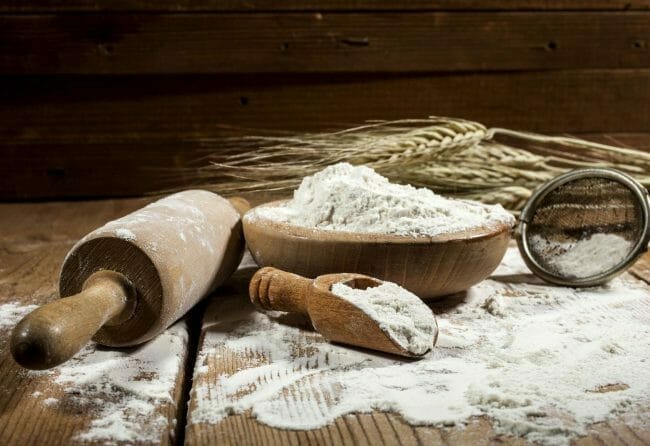 When I first started baking, I didn’t understand why people had different flours in their pantries.

As I advanced with my cooking skills, I chose to ditch my all-purpose comfort zone and start experimenting with different types of flours. Now, I can safely tell you that not all flours are the same.

One particular flour that I like is Manitoba flour. I needed a strong flour for my bread and found Manitoba flour to be a perfect fit.

Unfortunately, finding Manitoba flour isn’t always the easiest thing to do, so substitutes are necessary.

For pizza making, 00 flour and Caputo Nuvola are great alternatives to Manitoba flour. Finally, for desserts and pastries, all-purpose flour is the best substitute.

In this article, we will dive into the different substitutions of Manitoba flour based on their needed applications. We will also address some commonly asked questions pertaining to Manitoba flour.

As Manitoba flour is sometimes considered a type of bread flour, it is no surprise that the bread flour you find at the grocery store makes a great substitute. Its protein percentage is between 12.5-15%, making it one of the strongest flours.

Bread flour comes from hard red spring wheat. This wheat is high in protein. Bread flour is refined and does not contain the bran or germ of the wheat kernel.

Bread flour is excellent for dough as its high gluten content allows the dough to expand. This characteristic is essential in yeasted bread.

In other words, all three parts of the wheat, the bran, germ, and endosperm, are ground to create this flour.

Because the germ and bran are kept, whole wheat flour retains its nutrients and is high in fiber.

Thus, it is a healthier alternative to Manitoba flour. It also has a nuttier taste and a slightly darker color than all-purpose flour.

Despite having a high protein content, the presence of germ and bran make it difficult for the gluten to develop and for the dough to become elastic. As a result, whole wheat flour makes for heavier and denser bread.

When making the bread with whole wheat flour, allow it to rise only to 1 ½ times its size, not double, because it won’t support the rise.

If you want to replace Manitoba flour, add one tablespoon plus two teaspoons of water for every cup of whole wheat flour.

Both of these kinds can be used as substitutes for Manitoba flour. White whole wheat flour is produced by hulling white spring wheat.

Rye flour can be used as part of a substitution for Manitoba flour. Rye is one of the few cereals, aside from wheat, used widely to make bread. Rye flour is made by milling rye grains.

Rye flour alone is also notoriously sticky and challenging to handle. Adding another kind of flour will help the dough become manageable.

Rye flour has a good gluten content, but its gluten is different from wheat gluten. For that reason, rye flour is part of the substitution and not the whole substitution.

Therefore, rye flour is often blended with other kinds of flour, such as whole wheat flour.

For this substitution, about 25% or less of the total quantity of flour should come from rye flour.

If you enjoy making pasta, durum wheat flour might be familiar to you. This flour is made from durum wheat and is high in gluten.

Therefore, it is perfect for making your pasta dough stretchy. A few countries use Manitoba flour in the egg-pasta industry, but they use durum wheat flour in Italy.

Durum wheat is pliable and is suitable for making softer pasta shapes, such as spaghetti.

Semolina is flour made from the endosperm that is separated during milling from the hard durum wheat.

Though both durum wheat flour and semolina flour come from durum wheat, they are different.

After the milling process, durum flour is made using the leftover finely ground powder. Durum flour is more refined than semolina, while semolina is more coarsely milled.

As a result, fresh pasta made with semolina flour is often chewy and hard to work with.

It is often used to make rough and thick pasta shapes. Its consistency helps the pasta to maintain its shape while cooking.

Out of most gluten-free flours, cassava flour is one of the most similar to wheat flour. Though using gluten-free flour is tricky, this flour can be used as a substitute for Manitoba flour with some adjustments.

Cassava flour is made of grated and dried fibrous cassava roots. It has a mild, neutral flavor, which is rare to find with gluten-free flours. Its texture is soft and powdery.

Wheat flour can be substituted with cassava flour on a 1:1 basis in many recipes. However, the quality of cassava flour is vital for the best results.

You may also need to adjust the liquid content in your pasta dough for it to be smooth and malleable without being too dry.

00 Grade Flour is known as ‘the’ Italian pizza flour. It is a super fine flour with an 8-12% protein content. This is shown by its tasty, chewy pizza bases.

So, 00 flour can be used to substitute Manitoba flour in pizza making. Sometimes called doppio zero, 00 flour is particularly great for Neopolitan-style pizzas.

Its fine texture allows for soft bakes. You can find many imported types of type 00 wheat flour.

00 flour can also be used in pasta making. Just make sure there is some hard wheat blended in.

Caputo Nuvola is a type 0 flour. Tipo 0 flour is a bit less refined than tipo 00. It uses approximately 70% of the grain and is a bit darker in color.

Caputo Nuvola can also be used as a substitute for Manitoba flour. Caputo Nuvola is made to provide a pizza dough high in hydration.

This creates a light, airy, and puffy pizza crust. Due to its strength, this flour can hold up a long leaving time, which makes it great for long fermentation Neopolitan-style pizza.

All-purpose flour has a medium gluten content of about 12%. This makes its protein percentage less than that of Manitoba flour.

But if needed, all-purpose flour can be used to replace Manitoba flour in desserts, pastries, and even pizza dough. All-purpose flour is obtained by hard red winter wheat.

It is a refined flour with a light color that can be used for most baking purposes. However, not all-purpose flour is the same.

The substitution will not lead to the exact same result, but it will still be good.

Since all-purpose flour is not too high in gluten nor too low, the dough won’t be too stretchy.

Compared to when Manitoba flour is used, the batter or dough will be slightly wetter with all-purpose flour.

What Is Manitoba Flour?

Manitoba flour is a flour of common wheat (Triticum Aestivum) that is originally from the Canadian province of Manitoba. Though it is Canadian, it is chiefly used in Italy.

Manitoba flour’s main characteristic is its strength. Its high protein content, of about 15%, and its considerable water absorption power make it great for complex recipes.

Manitoba flour is high in two main insoluble proteins, glutenin and gliadin. When in contact with a liquid, gluten is produced.

This allows for a dough that is elastic and consistent. It is thus suitable for bread-making or making of products that need a long leavening time. Chefs use Manitoba flour to make several different types of food.

Because the dough made using Manitoba flour is often very elastic and strong, this flour is suitable for making some types of bread, such as pandoro, French baguette, chapati, panettone, and pandoro.

What Types Of Flour Is Manitoba Flour?

Manitoba flour is made from the Manitoba variety of hard wheat (Triticum aestivum). It is known as a strong flour.

Is Manitoba Flour A Bread Flour?

Manitoba flour is often classified as a strong, highly refined white bread flour. It is sometimes used to strengthen other flours, often mixed in during manufacturing.

What Can I Substitute Plain Flour With?

Plain flour can be substituted by several flours mentioned in this article. Other flours can be used as alternatives, such as chickpea flour, almond flour, cake flour, etc.

Manitoba flour is a flour of common wheat. It can be used to cook and bake several different food items.

If needed, it can be substituted with several other flours based on their needed applications.

Great substitutes that can be used in the making of pasta include durum wheat flour, semolina flour, and cassava flour.

For pizza, 00 flour and Caputo Nuvola can be used as substitutes. Finally, for desserts and pastries, all-purpose flour is the best substitute.