Can You Mix Cooking Oils? (+Tips for Cooking With Bacon Grease & More) 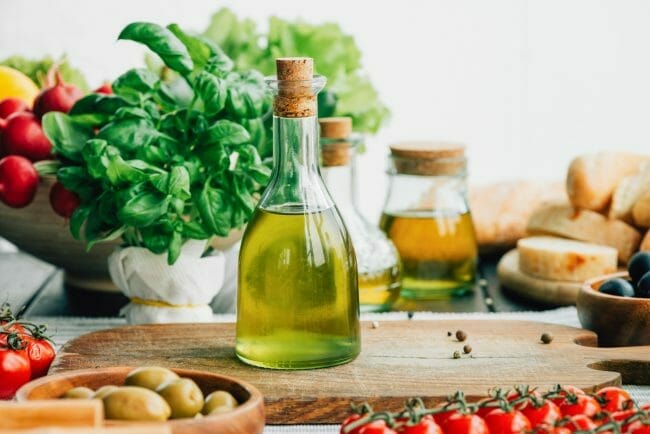 You’re finally back from picking up all of the ingredients for fried chicken at your local grocery store. Everything is sprawl out on the kitchen counter and your apron is tied tightly.

You’re ready to conquer this chicken. Then suddenly, you realize it. You can’t believe it. You forgot to get oil for the fryer.

Scanning your pantry, you find a half-full container of vegetable oil and some canola oil. Neither container has enough to use by itself.

You find yourself googling something you’ve never thought of before: Can I mix cooking oils?

Generally speaking, you can mix most cooking oils. However, you need to consider the smoke point, the type of cooking, if the mixture components are solid or liquid, and how your oil mixture will affect the taste of your food. Most of the time, mixing cooking oils is fine but be extra cautious when deep frying.

When mixing cooking oils, be sure to look up the smoke points of each oil in your mixture. Bringing your cooking oil past its smoke point can result in a smoky kitchen and food that tastes and smells bad.

Mixing cooking oils is easy and straight forward but there are a couple of things you should think about before deciding to cook with mixed cooking oils.

To avoid ruining your meal, smoke point is a critical factor to think about when mixing cooking oils.

Even when combined, the molecules which make up the lower temperature oil will retain their smoke point.

When mixing cooking oils, like peanut oil and vegetable oil, it is important to consider what type of cooking you are doing.

Are you deep frying? Searing or sautéing? Or are you baking? If you find yourself needing to mix cooking oils for a baking recipe, go for it!

However, if you’re deep frying, definitely make sure the cooking oils are compatible.

Cooking oils come is many forms with some solid and some liquid. Solid cooking oil sources include Crisco, other shortenings, lard, and butter.

Mixing cooking oils when one is solid and the other is liquid is simple and usually doesn’t present a problem, no matter what you’re cooking.

While mixing most cooking oils together is no problem, always consider taste when mixing. For example, sesame oil has a robust earthy, nutty flavor.

Sesame oil has a high smoke point of 410°F -446°F making it suitable to use when deep frying.

However, disregarding the flavor of sesame oil and using it to make your next funnel cake might not be the best idea.

Smoke point of mixed cooking oils can become a much bigger problem when deep frying opposed to other cooking styles.

The maximum temperature a deep fryer should be set to is 375°F. Many chefs say that high of a temperature is usually not necessary.

However, they do stress that you use a thermometer to be able to accurately gauge the temperature of your fryer oil.

If you’re not conscious of smoke point, you might mix a low smoke point oil like coconut oil with avocado oil which has a very high smoke point.

The result would be a smoky kitchen and uncooked food. Here are a few cooking oils combinations many people ask about.

Vegetable oil is made primarily from soybeans. However, vegetable oil is already a mixed cooking oil made from mixing other plant-based oils like canola, corn, palm, and sunflower oils.

Canola Oil is made from crushed canola seeds which is a variety of grapeseed. It sometimes gets a bad rap because canola seed processing requires using synthetic chemicals to extract the oil.

The combination of olive oil and vegetable oil for frying is a controversial topic. One side says olive oil has a smoke point which is way too low to be used properly for frying.

The other side says it is ok to mix olive oil and vegetable oil for frying. Which is true? Well, both sides are right.

For instance, high-quality extra virgin olive oil has a smoke point between 350°F -410°F. Whereas, lower quality olive oils have a smoke point as low as 300°F.

Be sure to purchase high-quality olive oil in case you need to mix cooking oils in your fryer one day.

Mixing high-quality olive oil with vegetable oil for deep frying should be ok. Set your deep fryer to 350°F and keep an eye on the temperature by using a thermometer.

Just like vegetable oil, canola oil and olive oil can be mixed for deep frying as long as the olive oil is high-quality and the fryer is set below its maximum temperature.

Like butter and Crisco, bacon grease and vegetable oil can be mixed when frying up your next meal. However, you must do a couple of things before mixing these two cooking oils.

First, you will need to strain out any leftover bits of bacon from your bacon grease when you plan to use it to deep fry.

On the other hand, if you are using vegetable oil and bacon grease for stove top cooking, those left behind bacon pieces will give food an excellent flavor.

When mixing bacon grease and vegetable oil for deep frying, the bits of bacon left behind in the grease has a lower smoke point than the grease itself.

This means they start to burn up and smoke before your grease does. Instead of adding extra flavor, these bits of bacon end up tainting the whole batch of fryer oil making anything in the oil taste awful.

So, be sure to strain your bacon grease well before mixing it with vegetable oil when deep frying.

Next, you’ll need to first melt the solid bacon grease down to a liquid before you mix in the vegetable oil. This will provide a seamless emulsion.

Why You Should Never Mix Cooking Oil And Water

There have been countless kitchen meltdowns because someone mistakenly thought adding water to a fryer was a way to compensate for a lack of oil. Never, ever add water to a fryer!

Oil is a non-polar molecule meaning its charges are balanced all around. When water and oil are mixed, the oil molecules repel the water molecules and end up sticking to each other.

In a fryer, oil tends to collect at the top and the water sinks to the bottom. With the high temperatures of fryers, the water gets extremely hot eventually exploding hot oil all over.

This can cause serious injuries so it’s best to never mix cooking oils and water in a fryer.

The BBC says you can save money if you mix in vegetable oil with your diesel fuel. There needs to be a number of conversions made to your vehicle if you want to switch to fully running on vegetable oil.

But, it’s possible to stretch your diesel fuel a little farther by mixing in some vegetable oil. Make sure you do your research before trying this.

What Is Smoke Point?

The smoke point of a cooking oil is, well… exactly what it sounds like. It’s the temperature at which the oil begins to produce smoke.

At the smoke point, compounds that make up the oil’s chemical formula begin to interact with oxygen.

This produces smoke that will fill your kitchen with a nasty smell and can taint the flavor of your food.

There seems to be an endless number of different types of cooking oils. When necessity strikes and you need to mix cooking oils, don’t fear!

Just remember to consider taste, smoke point and type of cooking before you mix cooking oils.

Whether you’re deep-frying, baking, or stovetop cooking, our guide is always available for the next time you need to mix cooking oils.