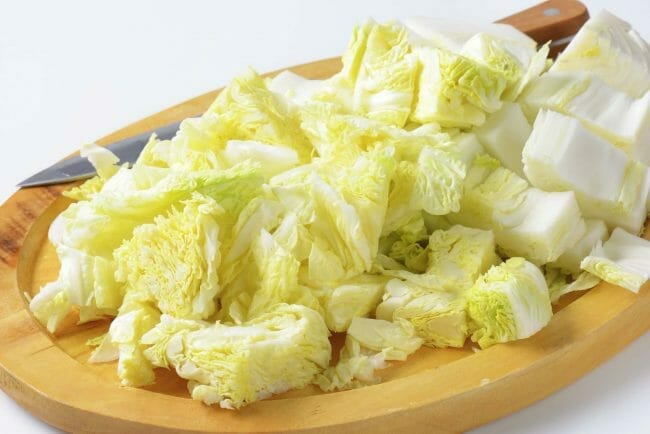 There are few things as enjoyable as the satisfying crunch from a cabbage-based dish. Napa cabbage with its distinctive oblong shape and curly leaves has many health benefits and uses.

It’s the traditional cabbage for kimchi and is popular in a variety of Asian dishes. Despite its health benefits and popularity, napa cabbage can be hard to find sometimes in the grocery store.

Whatever your reason for searching for a replacement for Napa Cabbage (allergy, taste, or lack of grocery store options), we have suggestions for you. While green or savoy cabbages are best bets for kimchi, kale and swiss chard can do the trick in your dumplings. Red cabbage or kohlrabi makes a crunchy swap for your slaw recipes, while choy sum and bok choy are great replacements in a stir-fry.

In this article, we’ll go over the best way to use these swaps and answer some frequently asked questions about Napa Cabbage.

Green cabbage is one of the easiest to find cabbages at the grocery store. Nearly every market will carry it, making it a great overall swap.

Green cabbage is more spherical than napa cabbage and has thicker leaves and ribbing.

It works easily in kimchi and can be used as a 1:1 replacement in any kimchi recipe. Cutting up the leaves a bit smaller than you would with napa cabbage may help speed up the fermenting process.

Savoy cabbage is often thought of as the prettiest of all the cabbages. This is because its leaves spread out in a pattern, resembling a flower.

Savoy cabbage is a popular choice for stuffed cabbage and cabbage rolls due to its large and sturdy leaves.

This cabbage has a more delicate flavor than some cabbage varieties, making it an ideal swap.

Savoy cabbage is an easy replacement in kimchi and can be used in a 1:1 ratio, with all the same ingredients.

It is a bit softer than napa cabbage and may ferment quicker for that reason.

Cabbage is a popular filling for many types of dumplings. Whether you are doing a veggie dumpling or a meat-based dumpling, cabbage is a typical addition that adds body, flavor and nutritional benefits to the dough-wrapped treat.

While kale is not a traditional ingredient used in dumplings, it makes for a great swap for napa cabbage.

It is very easy to find in stores and often comes in many varieties. The robust, strong leaves and curly texture imitate the texture of the cabbage nicely.

Kale is a tough leaf with a stronger flavor than napa cabbage. It will impart more bitterness to the dish, which can work very well with the fatty meats like pork typically found in a dumpling.

Because kale is a bit tougher and stronger in flavor, you will want to be careful in how you add it to a dumpling.

If you are using it to bulk up your dumpling filling, use about twice as much kale as you would cabbage.

Kale shrivels up and gives a lot of water when cooked, even more than cabbage. Just know that if you are adding that much kale, the flavor will be noticeable.

Green Swiss chard is another lovely swap for napa cabbage that you can use in dumplings.

A little milder in flavor than kale, swiss chard is a similarly tough vegetable to kale, with some bitter notes. Unlike cabbage, it will not caramelize or release sugars when cooked.

However, it has a lovely bright flavor that pairs well with rich cuts of meat, just like the kale.

Use green swiss chard in the same way that you would use kale, at a 2:1 ratio as a napa cabbage replacement.

Be sure to cook it down thoroughly to release all the water. If you don’t, your dumplings may become waterlogged.

Red cabbage is an exciting and fun choice as a swap for napa cabbage. It is brightly colored, very crisp, and intensely flavorful.

The crispness and bright colors make it an excellent choice for raw dishes such as salads and slaws.

The crisp red cabbage holds up well under a dressing, and the color looks striking in a dish. Red cabbage can replace napa cabbage at a 1:1 ratio in slaws.

Red cabbage is much tougher than napa cabbage, so make sure to slice it thin so that the dressing penetrates the vegetable.

You may not have heard of kohlrabi, but it is actually part of the cabbage family! Its flavor is mild and sweet, much like a turnip, while the leaves are on the bitter side. Despite being related to cabbages, kohlrabi actually looks like a radish.

While it is typically steamed, mashed, or even fried, kohlrabi is also edible raw and makes a great addition to slaws and salads.

To use kohlrabi as a replacement for napa cabbage in coleslaw, chop the veggie up into matchsticks.

Once down to a reasonable size, kohlrabi can replace napa cabbage in a 1:1 ratio in slaws.

You may be familiar with roasted brussels sprouts, but did you know that you can actually make them into a slaw? It’s true!

Thinly sliced brussels sprouts tossed with some crunchy carrots, sweet raisins, and a punchy dressing makes for a delicious and healthy slaw that brightens up any meal no matter what time of year.

Stir fry is a classic Asian cooking method that involves using a large wok, and cooking meats and vegetables at high heat with a bit of oil for a very short amount of time.

Other add-ins can include noodles or rice, making a complete meal. While American versions of stir fry don’t typically include cabbage, it is a popular vegetable to use in Asian stir fry.

Choy sum, also known as “Chinese flowering cabbage” is often easily confused with napa cabbage because of its name.

Despite that, the choy sum has a very distinct look that does not resemble the napa cabbage.

The vegetable originated in China, looks similar to broccolini. Its flavor is similar to bok choy, though a bit milder in flavor. Choy sum cooks up beautifully in stir fry and is a great addition to any stir fry recipe.

Choy sum may not be the first swap you will think of because it is not as easy to find in stores as some of the other swaps. If you do choose to use it though, you will not be disappointed.

Choy sum cooks up quickly and offers a delicate vegetal flavor. To use as a replacement for napa cabbage, know that it may cook up a bit quicker, so keep an eye on the flame!

Bok choy is the more well-known cousin to choy sum. Like napa cabbage, it is not only very low calorie, but also chock full of vitamins, fiber, calcium, and has been shown to help with digestion and ease inflammation.

Bok choy is a popular vegetable for Chinese stir fry and makes an easy swap for napa cabbage if you can’t find any or don’t prefer the flavor.

It has a high water content but does not get cooked down as much as cabbage would.

To swap bok choy for napa cabbage, you can use a 1:1 ratio. It will cook up much quicker than napa cabbage though, so adjust your cooking times accordingly.

A less well-known but equally delicious vegetable, endive is an excellent choice for any salad.

Shredded, sliced in half, or by separating out the leaves, endive will add a mature flavor to your dish.

It is slightly more bitter than napa cabbage but still has the slightly buttery flavor known in napa cabbage. It makes for a fantastic bracing salad and an easy alternative to napa cabbage.

What better vegetable to use in a salad than a classic head of iceberg lettuce? Iceberg lettuce makes a great substitute for napa cabbage because it is very crunchy unlike other softer forms of lettuce.

Its substantial shape holds up well under dressings, and it is even mistaken for green cabbage by some people.

Iceberg lettuce is a very plain type of lettuce making it a very versatile option for salads.

How Is Napa Cabbage Different From Regular Cabbage?

Napa cabbage is part of the cabbage family, the same as green cabbage, red cabbage, and even savoy cabbage.

Napa cabbage is a bit sweeter and softer than green and red cabbage, though not as soft or pliable as savoy cabbage.

For the most part, they are all interchangeable with each other and will have very similar flavors when cooked.

Are Napa Cabbage And Bok Choy The Same?

Are Napa Cabbage And Chinese Cabbage The Same?

Napa cabbage is often called Chinese Cabbage in the U.S. because it originated in China.

Choy sum, a related vegetable from China, is sometimes also translated as “Chinese Cabbage” or “Chinese flowering cabbage,” which can lead to some confusion.

You can tell them apart because napa cabbage looks like an oblong cabbage, while choy sum more closely resembles broccolini.

Napa cabbage is perfectly safe to eat raw. It is delicious in slaws and salads and is used in its raw form to make kimchi as well.

Whether you are looking to whip up a quick cabbage stir fry or make some slow-pickled kimchi, there are many fantastic substitutes out there for napa cabbage.

The cabbage family is wide and diverse, and there are many options to suit your culinary needs.

Hopefully, this article gave you some insight into Napa Cabbage and its many wonderful uses!