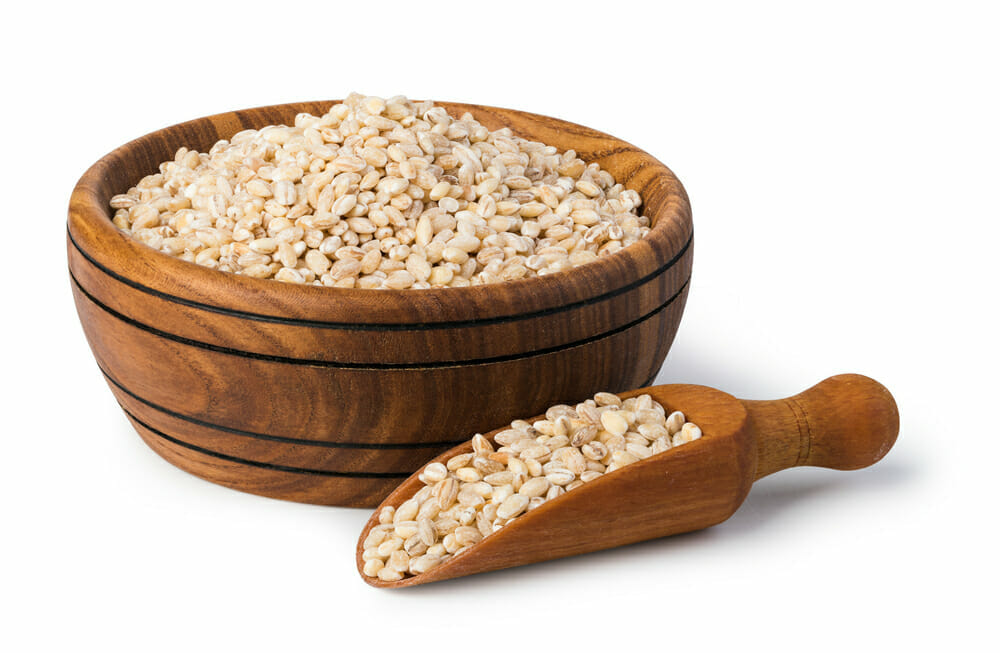 Who doesn’t love a nice, warm, hearty bowl of soup on a cold winter day such as today? I know I do. And if you’re a big soup lover such as myself, barley soup comes to mind fairly quickly.

But what if you get the craving for some comfort in the form of a big bowl of vegetable or beef barley soup and you just don’t have any barley on hand? Or what if you need to find a worthy gluten-free substitute?

Or maybe you’re still sticking to your New Year’s resolutions and are looking to top your salad with a nutritious grain other than barley. Check your pantry for these pearl barley substitutes!

The best pearl barley substitute is farro – with the most similar nutrition profile, size, taste, and texture. The best pearl barley substitutes for salads and pilafs are farro, quinoa, couscous, and bulgur wheat. For soups and stews, the best alternatives are brown rice, millet, sorghum, and corn. For oatmeal or porridge use oats, buckwheat, or teff.

All pearl barley substitutes discussed are gluten-free besides couscous and bulgur wheat.

There are plenty of pearl barley substitutes that will provide you with great nutrition and satiety.

You can use any of these gluten-free substitutes in place of any recipe that calls for pearl barley.

In this article, we will discuss 12 of the best pearl barley substitutes.

Let’s start things off strong. Farro is the best pearl barley substitute. Why do you ask? Well, you can observe the similarities right off the bat.

They look very similar, although farro is slightly larger and has a more oblong shape compared to barley.

Farro will provide you with the same slightly nutty flavor and chewy texture that barley will.

They are also both very nutritious, with almost an identical nutrition profile.

Quinoa is an excellent pearl barley substitute (and overall all-star grain; although it is *technically* a seed) for so many reasons.

Differing from other grains (besides two others that we will discuss further), quinoa contains all of the human body’s 9 essential amino acids.

This makes it a complete protein, which is usually honor only bestowed upon animal products.

A complete protein means that protein can act to its full potential within the human body – building and repairing muscles and bones, making hormones and enzymes, and providing a source of energy. Protein is so important!

And substituting quinoa for pearl barley in your recipes can provide more of it while still providing you with the grainy similarities of pearl barley. ¼ cup of dry quinoa contains 170 calories, 32 g carbs, 5 g fiber, and 6 g protein.

Couscous is one of two mentioned pearl barley substitutes that is not gluten-free.

It is a traditional North African pasta that is made from coarsely ground durum wheat. Couscous is notably high in protein and selenium, which is an antioxidant.

It contains wheat and is therefore not a gluten-free pearl barley substitute. Bulgur wheat is a great ingredient commonly used in the Middle Eastern salad tabbouleh.

It has a chewy and mildly nutty taste to it, making it a great pearl barley substitute.¼ cup dry bulgur wheat contains 160 calories, 35 g carbs, 5 g fiber, and 4 g protein.

Rice is probably the most common and versatile grain you will find on your grocery store shelf.

It is a staple in food in many households around the world and is an excellent gluten-free grain option.

Opting for brown rice over white rice will more closely mimic pearl barley in that it is chewy, fibrous, and nutritious.

That is because of brown rice’s whole grain status – meaning that it contains all parts of the grain (bran, germ, and endosperm), while white rice has had the nutritious bran and germ parts removed.

Millet is a gluten-free ancient grain. It is small and round shaped. While not a complete protein such as quinoa or buckwheat, millet boasts an ample amount of essential amino acids compared to most other grains.

Amaranth is a gluten-free ancient grain that has been gaining recent popularity (most likely because ALL ancient grains have). It is another complete protein.

Another gluten-free ancient grain is Sorghum. It is round and pale in color and is slightly smaller than corn. Sorghum has a distinct nutty flavor, making it a great pearl barley substitute.

It is particularly popular in the south. Sorghum may sound unfamiliar to the average consumer, however it is actually the 5th most produced grain in the world (just after barley). Sorghum is notably higher in fiber than most other grains.

Corn! Another classic. An American (and BBQ) staple, corn is a gluten-free starchy vegetable. But it is actually only considered a vegetable when it is whole corn (i.e. corn on the cob).

The corn kernel itself (where popcorn comes from) is considered a grain. Yes – popcorn is a whole grain, yay! Corn is the most produced grain in the world (as of 2020/2021).

Corn products are everywhere. From corn tortillas and corn mill to cornstarch and corn syrup – you would be hard pressed to not find a product that doesn’t contain corn in your pantry. Corn contains a variety of vitamins and minerals.

Because of its starchy veggie status – corn is notably lower in calories, carbohydrates, and fiber; while slightly lower in protein.

Oats! We know ‘em, we love ‘em. They are a baking staple and make a fine substitute for pearl barley.

Not to mention they’re one of the world’s healthiest grains. Studies have shown oats may help aid in weight loss, lower blood sugar levels, and reduce the risk of heart disease.

It is important to note that while oats are naturally gluten-free, most of them are produced in locations that may come into contact with other gluten-free food items. Therefore, oats may not be the best option if you are looking to avoid gluten entirely.

When substituting for barley, steel-cut oats are the better option compared to old-fashioned rolled oats because of their similar texture, size, and reaction to cooking.

Another complete protein grain (also technically a seed). Don’t be fooled by the ‘wheat’ in buckwheat – buckwheat is a naturally occurring gluten-free grain that is free of wheat.

Buckwheat is notably richer in minerals (especially manganese, copper, and magnesium), but lower in vitamins, compared to other similar grains.

Buckwheat is lower in calories, carbohydrates, and fiber compared to pearl barley.

Last but not least – teff. This gluten-free whole grain (which is technically a seed) can make for a great pearl barley substitute. It has been a staple in Ethiopian cooking for thousands of years.

Notably, teff is much smaller than most grains. Although more expensive than other grains (due to the difficulty level in harvesting it), the nutritional profile of teff is excellent. It is particularly high in iron.

What Is Pearl Barley?

However, pearl barley still contains beta glucans – an important soluble fiber that aids in digestion and may help lower cholesterol – which still makes it a healthy choice.

This processing also results in pearl barley having a quicker cooking time compared to regular barley.

Besides fiber, pearl barley is a great source of other nutrients such as B vitamins (thiamine, niacin), iron, magnesium, phosphorus, copper, selenium (antioxidant), and manganese.

Barley, like all other grains, is naturally low in fat. Some studies have shown that nutrient dense grains such as barley may help lower the risk of diabetes type 2 and certain cancers such as colorectal cancer, which has been on the rise – particularly amongst younger adults.

Barley provides a subtle nutty texture and is slightly chewy. Its versatility allows it to be enjoyed in soups, stews, risottos, on top of salads, in baking, or just simply on its own.
Barley is one of the most consumed grains in America, and for good reason. ¼ cup of dry pearl barley contains 200 calories, 44 g carbs, 6 g fiber, and 5 g protein.

Is Pearl Barley Good For You?

Most definitely! Packed with tons of fiber, vitamins, minerals, and antioxidant and anti-inflammatory properties – pearl barley (along with other whole grains) is one of the healthiest foods.

Is Pearl Barley the Same As Regular Barley?

Not quite. While barley is considered a whole grain, pearl barley is not. This is because pearl barley has lost its outer husk and its bran layer in processing, and it has been polished. This makes it slightly less nutritious than regular barley.

It has a lighter, more matte appearance compared to regular barley.

Is Pearl Barley Good For Diabetics?

That was a lot of grain talk! I know what I’m having for lunch. In short, there are tons of different types of grains out there.

What’s great about grains is that you can use most of them interchangeably with one another in most recipes.

Hopefully, you have learned what to do should you ever go to make a recipe that calls for pearl barley, but (dang!) you’re missing the pearl barley!