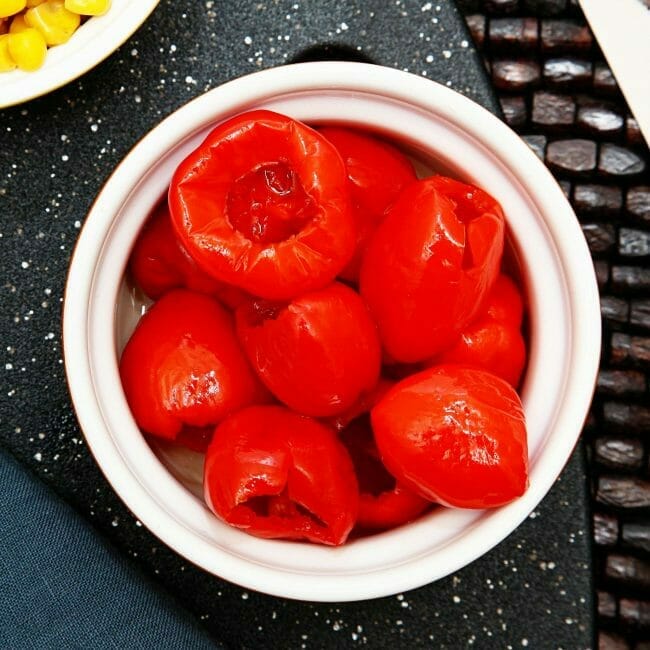 I am a big fan of peppadew peppers. I could probably eat a whole jar. The sweet pickled peppers are irresistible!

However, I often run out of jars of peppadews. My local grocery store doesn’t always have them in stock and then I need a replacement.

Since I am a true peppadew addict, I have found quite a few suitable peppers to replace peppadew. Let me tell you all about them!

Find a jar of pickled cherry peppers and you have found the perfect substitute for Peppadew Peppers.

Pickled sweet cherry peppers are just like Peppadew. They have a sweet heat and a lovely pickled taste.

Pickled cherry peppers can be hot or mild, depending on the brand. Look for the mild version to use in place of Peppadew. Stuff the sweet cherry peppers and enjoy just like a Peppadew!

Sweet red peppers can be found in most grocery stores. They are usually sold as fresh peppers.

Fresh sweet red peppers will have more of a crunch than Peppadew but are still delicious when stuffed.

Sweety pepper drops are a type of jarred pickled pepper. They are very close to Peppadew in taste and texture. They have that sweet heat and pickled taste you are looking for!

Sweety drop peppers are a little smaller than Peppades. However, they are perfect for stuffing.

Fill the little pickled peppers up with your favorite creamy, cheesy filling for a delicious appetizer.

Pimento peppers can be found fresh or jarred. Look for the jarred version to get a similar texture pepper like Peppadew.

Stir the chopped peppers into cornbread batter or saute them in oil at the start of a recipe.

Sweet cherry peppers are super close in taste to Peppadew peppers. They are about the same size and even have the same bright red color.

For every 5 peppers, add 1 tablespoon of white wine vinegar to get that tangy, pickled taste.

When sauteed or baked, they will start to caramelize and get very sweet.

Use red bell peppers to get a flavor most similar to Peppadew. Be sure to cook them so they are tender like Peppadew, too!

Pickled jalapenos are a little bit spicier than Peppadew peppers. However, they are fantastic on top of sandwiches.

They add just the right amount of zesty heat that will make your sandwich complete!

If you want the sweetness of Peppadews, drizzle a little honey over the pickled jalapenos.

Pepperoncini are a type of green jarred pepper. They have a similar tangy, mild taste like peppadew even though they are a different color.

Pepperoncini is a very popular pepper to put in a sandwich or on top of a pizza. You can usually find the jar in the Italian section of your local grocery store.

Give this slow cooker pepperoncini beef sandwich from Let’s Dish a try!

Giardiniera is a sweet, Italian mix of pickled vegetables. The jar usually contains carrots, cauliflower and celery all mixed together in a sweet pickling brine.

Giardiniera is great in sandwiches or tossed on top of the pizza in place of Peppadews. It is much easier to find than jarred Peppadew peppers so you should be able to grab a jar nearby.

You may not get the spicy flavor that Peppadews have but you will get a great pickled taste.

Jarred roasted bell peppers are very easy to find in the grocery store. They are typically jarred in water but the oil from the pepper skins makes the marinade thick. Use the juice in the jar as well as the roasted pepper to top your sandwich.

Roasted bell peppers have a sweet and smoky flavor. They are a good replacement for Peppadew on a sandwich to give a mildly hot flavor.

What Is A Peppadew Pepper?

Peppadew peppers are actually a kind of Piquante Pepper. Piquante peppers were first discovered in 1993 in South Africa.

They are a fairly new sweet cherry pepper to the culinary scene. Agriculturists immediately saw that the Piquante peppers would be popular and many farmers secured rights to the seeds.

Peppadew peppers are simply Piquante peppers that have been pickled and sweetened. The name “Peppadew” is actually the brand that makes the jarred, pickled peppers.

Peppadew peppers are not very spicy at all. In fact, they are kind of sweet. Not only is there sugar added to the pickling mix, but piquant peppers are fairly sweet, to begin with.

Peppadew peppers measure in at about 1177 Scoville Heat Units on the Scoville scale, the tool most often used to measure peppers’ heat levels. This is about the same heat as a poblano pepper which is known to be very mild.

How Are Peppadew Peppers Made?

Peppadew peppers are made by scooping the seeds and ribs out of the center of a piquant pepper.

The hollow peppers are then placed in a sweet vinegar brine. Herbs and seasonings are added and then the peppers are sealed in a jar.

Peppadew peppers sit in the jar for several months, allowing the peppers to pickle properly.

While it isn’t hard to make Peppadew peppers, it does take a little bit of patience to wait for them to be ready to eat!

Like I mentioned before, I like to eat Peppadew peppers straight out of the jar. However, you can use them for cooking as well.

Peppadew peppers are delicious when chopped and baked into cornbread and muffins. They are the perfect size to stuff and serve as appetizers.

Peppadew peppers can also add a sweet and spicy taste to sandwiches and pizzas.

We know that you may still have questions about Peppadew pepper substitutes. Hopefully we can answer some of those questions here!

Are Peppadews And Pimentos The Same?

Peppadews and pimentos are not the same. They are actually two different types of peppers.

Peppades are piquante peppers, not pimentos. They do have a similar texture and shape!

Peppadew peppers are sweet and also tangy. They have a very slight heat but are more sugary than spicy.

What Kind Of Pepper Is A Peppadew?

Peppadew peppers are piquante peppers. They are a small, red, cherry pepper that first originated in South Africa.

Are Sweet Cherry Peppers The Same As Peppadew Peppers?

There are, however, many other types of peppers that fall into the classification of “sweet cherry pepper”.

While I wish I could always find a nice jar of Peppadew peppers, that isn’t always the case.

These Peppade substitutes will work when you can’t find those sweet, tangy peppers you crave.