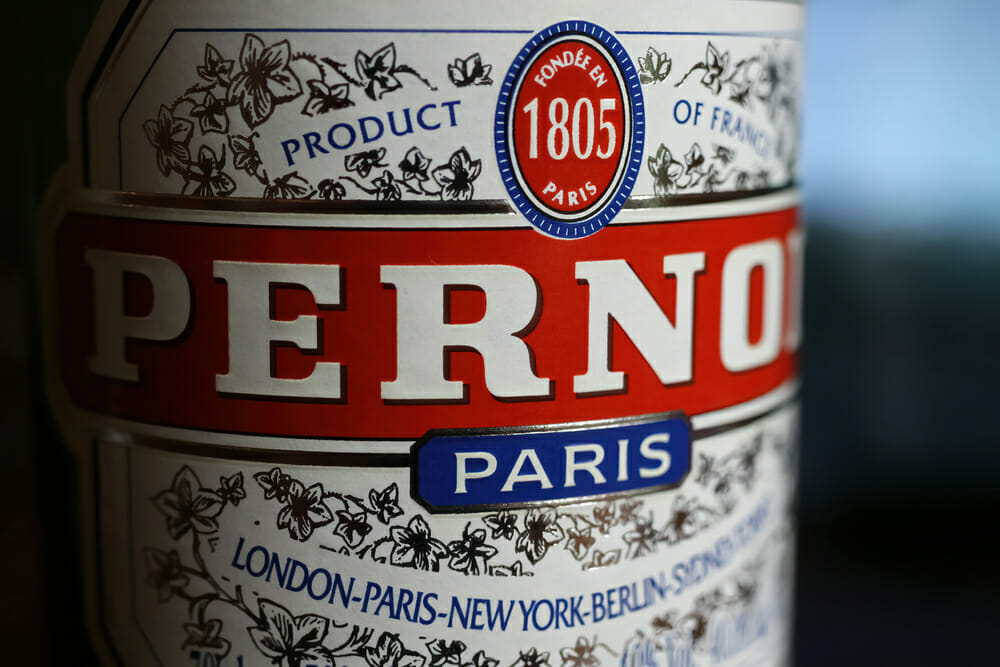 French cooking is known for having that certain “je ne sais quoi.” Well, sometimes that “quoi” is Pernod!

A French liqueur with a strong anise flavor, Pernod is a popular ingredient in French cuisine and is most popularly used in seafood dishes such as oysters and mussels.

If you are looking to cook seafood, Pastis, Absinthe, white wine, ouzo, or Sambuca are your best choices. However, if you are cooking meat, drinks like whiskey, vodka, or Anisette are great substitutes.

If you prefer cooking without alcohol, doing a combination of citrus and anise, ginger and anise, or fennel seed are all great options.

In this article, we’ll be going over in more detail the best substitutes for Pernod, how to choose a substitute, and some questions you may have about Pernod. Keep reading to learn more about Pernod!

Pastis is another French alcoholic drink that is flavored with anise. Unlike Pernod, it is a hard liquor, with a 40% alcohol content.

It has very similar flavors and aromas to Pernod though, with anise being its main flavor profile.

Pastis is an “aperitif” popularly drunk before beginning a meal to stimulate hunger.

While with Pernod you will not add it to seafood dishes until the very end of the cooking, with Pastis you will want to add a little bit earlier to cook off a bit more of the alcohol.

Use about ¾ of the recommended amount when substituting pastis for Pernod.

Absinthe is beautifully complex alcohol with many herbs added giving it a wonderful aroma and flavor, including anise.

It has a very high alcohol content (typically between 45-70% alcohol) and has in some cases been described as having hallucinogenic properties due to its use of wormwood in production.

It has been banned in many countries over the years but in recent years as researchers have learned more about its safety, it has become legalized in most western countries.

Cooking with Absinthe is easy. Despite its high alcohol content, most of the alcohol will cook off once it is heated, leaving only the delicate anise aromas and flavors.

You will not need as much absinthe as you would Pernod, so use only about half as much as the recipe calls for (a 1:2 ratio).

White wine is a classic pairing with seafood dishes, typical for dishes such as mussels and toast points, shrimp scampi, and many others.

If you are seeking a bright acidic flavor that will add complexity and body to your seafood dishes, white wine is a great choice. White wine will not add any anise flavor to your dish though.

If you are seeking that specific Pernod flavor, white wine will not help you get there. However, if you’d prefer to skip the anise flavor and just add the acidity and alcohol, white wine is a perfect choice.

You can typically use about double the amount recommended by recipes when using white wine as a substitute.

Ouzo is another anise-flavored liquor, similar to Pastis. It is traditionally from Greece and has been marked as a Greek Heritage beverage by the EU.

Like several of the other liquors on this list, ouzo is a “digestif” and is consumed at the end of big meals in Greece.

If you are seeking the distinct anise flavor of Pernod but cannot find it in the market, Ouzo is a great alternative that is more well-known and easier to find at your local liquor store.

You can replace ouzo at a 1:2 ratio for Pernod.

As our journey continues through European anise-flavored drinks, we make our way to Italy, home of Sambuca. Sambuca is the Italian’s take on anise-infused liquors.

It is made by adding the essential oils of anise, elderflower, and sometimes other flavors such as licorice.

Sambuca is typically drunk straight up after a big meal to aid digestion.

As sambuca has a higher alcohol content than Pernod, you will want to add it a bit earlier to your dish so that more alcohol cooks off. Start with about half as much sambuca as the recipe calls for.

Whiskey is grain-based alcohol made by fermenting mashed grains such as rye or barley.

Despite being made from grains, whiskey is completely gluten-free and is safe to use for those with Celiac disease.

Whiskey does not have anise flavors in it and is instead known for having smoky and caramel notes.

It is a heavier flavor and stands up well to red meats and other heavier meat-based dishes.

If you are still seeking an anise flavor, you can also add a couple of star anise to your recipe either in a cooking liquid or in oil to release the flavors. Whiskey can replace Pernod at a 1:1 ratio.

Vodka is a classic Russian alcoholic beverage made from fermented potatoes. It is known for having almost no taste, which makes it an easy substitute for alcohol in almost any dish.

Vodka will not add any anise flavor to your dish since it does not have any flavorings. However, alcohol is still a great addition to cooking because it brightens flavors and helps tie flavors together.

Because it is flavorless, vodka works well in meat-based dishes, but also seafood, vegetable dishes, and just about any dish where you would use Pernod. You can replace pernod with vodka at a 1:1 ratio.

As I’m sure you can guess by the name, anisette is another anise-flavored alcoholic drink. It is made like Sambuca, by distilling anise seeds, making it a very pure flavor.

It is a bit sweeter than some of the other drinks on this list, so you want to be careful when adding it to your recipes.

A little bit of anisette will go a long way, so make sure to taste as you go. Start with half the amount the recipe calls for and increase as necessary.

French cooking is known for its liberal use of alcohol in its recipes. However, some religions like Islam and some forms of Christianity forbid the consumption of alcohol, while others simply prefer not to use alcohol in their cooking.

If you are looking for an alcohol-free substitute for Pernod, the juice from citrus fruits along with added anise can be a great substitute.

For the closest flavor, take about a half cup of citrus juice (such as lemon juice) and add about a tablespoon of anise seed to infuse overnight.

The next day you will have an anise-flavored juice that will add brightness and a floral anise flavor without the alcohol content.

Lemon juice is very strong so start with about ¼ of the recommended amount and increase as necessary.

Be careful with this swap, a little bit goes a long way. Since you are not adding any liquid, you may need to adjust your liquid amounts in the recipe as well.

For every ¼ cup of Pernod you can use about a tablespoon of ginger and one-star anise.

If you don’t have any star anise on hand but are still seeking an anise flavor, fennel seed is a great alternative. Fennel seed and star anise have very similar flavors, often compared to licorice.

Fennel seed is delicious in seafood and meat-based recipes such as lamb. Lightly toast or sauté the fennel seeds before you add your other ingredients to gently open up the flavors and get the most benefit of the fennel seed.

For every ½ cup of Pernod you can add about a tablespoon of fennel seed.

Choosing A Substitute For Pernod

What is the best way to choose a substitute for Pernod? There are a few key things you want to consider.

When choosing your substitute, it’s helpful to know the difference between different types of alcohol.

Hard liquor (like vodka, whiskey, or gin) contains the highest alcohol content (about 40%) and the fewest additions such as flavors and sweeteners.

Liqueurs (like Pernod) will also be high alcohol (20-30%) but tend to be much sweeter and often have an almost syrupy consistency.

Typically when cooking with Pernod, you do not burn off all of the alcohol (like with wine) because it weakens the flavor, instead, you add it at the very end of cooking. It is a delicate flavor most popular with delicate dishes such as seafood dishes.

If you are seeking a substitute with the most similar flavor you will want to choose a liquor or liqueur because their high alcohol content will keep the flavor better.

The key reason for cooking with Pernod is for the anise flavor. However, maybe you don’t prefer the flavor and taste of anise.

Or perhaps you abstain from alcohol for religious or health reasons, in which case you will want to choose something that will give you a similar flavor but without the alcohol.

What Is The Difference Between Pernod And Absinthe?

Pernod was invented after absinthe was banned in the 20th century. It has a lower alcohol content and does not contain wormwood, the substance in absinthe that made it illegal.

Pernod, Pastis, and Absinthe are all anise-flavored French alcohols with different alcohol contents and different amounts of sweetness and anise flavor.

If you’d like to learn more about French liquors, check out this article about Hennessy substitutes. Top 10 Hennessy Substitutes [Mixed Drinks & Non-Alcoholic] (smarterhomemaker.com)

How Do I Cook With Pernod?

The important thing to know with Pernod is that you do not want to heat it to a boiling point the way you would with some liquors.

Anise flavor is very delicate and when it is heated quickly the flavors break down and become more bitter.

Add Pernod or other anise-flavored liquors at the very end of your cooking, or heat it up slowly so that the flavors incorporate into the dish.

If you’re new to cooking with Pernod and would like to give the flavor a try, this simple recipe that calls for only two tablespoons of Pernod is a great starting place! Prawns with Pernod Recipe | MyRecipes

The world of anise-flavored liquors and liqueurs is wide and diverse and has a long history in European cooking and eating.

We hope that in this article you were able to learn a bit more about Pernod and other anise-flavored drinks and have gotten some great ideas for your next cooking adventure!