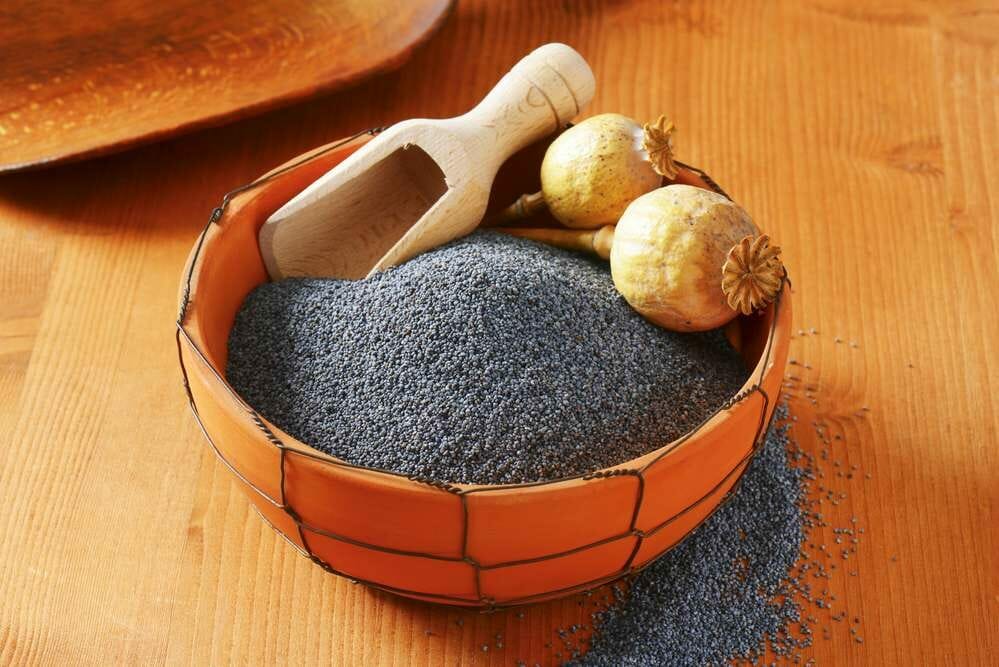 Poppy seeds have so many great uses in recipes. They provide a nice subtle nutty taste and crisp and a ‘poppy’ texture.

Perhaps that’s where they got their name from? Poppy seeds can be used in an array of dishes – both savory and sweet (my personal favorite being Everything bagels!).

But what to do if you can’t find any? Or maybe you want to try something new to provide a unique taste to a classic recipe.

Black sesame seeds are small, flat, oily seeds that grow in the fruit pods of the Sesamum indicum plant, which has been cultivated for thousands of years. They are primarily produced in Asia.

In comparison to white sesame seeds, black sesame seeds appear to contain more lignans (a member of a group of substances found in plants that have shown estrogenic and anticancer effects) and certain beneficial unsaturated fatty acids.

They are also a good source of manganese – although notably not as good of a source as poppy seeds.

1 tablespoon of black sesame seeds contains about 50 calories, 4.5 grams of fat, 2 grams of carbs, 1.5 grams of protein, and 1 gram of fiber.

This is nearly identical to that of poppy seeds – although slightly higher in fat.

When looking for a good poppy seed substitute, chia seeds are your second best bet. Chia seeds have existed for thousands of years (they were actually a staple in Aztec and Mayan cultures!), but have only recently become popular for their array of health benefits and unique texture/consistency.

Chia seeds are very versatile, like the poppy seed. However, they would be best used as a poppy seed substitute when dry, since they puff up and become a gel-like substance when wet.

Chia seeds are also a great source of other nutrients such as antioxidants, calcium, iron, magnesium, phosphorus, zinc, vitamin B1 (thiamin), and vitamin B3 (niacin).

They differ most from poppy seeds in regards to fiber – chia seeds have a ton of it!

Flax seeds are another seed that has been around for centuries but are only just recently gaining popularity because of their health benefits. In fact, flaxseed is one of the world’s oldest crops.

Flax seeds possess a nutty flavor and crunchy consistency – very similar to that of poppy seeds.

They are an excellent source of protein, fiber, and omega-3 fatty acids. Flax seeds are also a source of thiamin, copper, manganese, and magnesium.

A unique property that flax seeds possess is their high lignan content. Lignans, as previously mentioned, are cancer fighting compounds found in plants.

Flax seeds contain far more lignans than any other plant – up to 75-800 times more.

1 tablespoon of flax seeds contains about 37 calories, 3 grams of fat, 2 grams of carbs, 1.3 grams of protein, and 2 grams of fiber.

When toasted, the nuttiness of the sesame seed really comes forward – mimicking the poppy seed in taste. Sesame seeds are small and crunchy, also like the poppy seed.

1 tablespoon of whole dried sesame seeds contains about 52 calories, 4.5 grams of fat, 2 grams of carbs, 1.6 grams of protein, and 1 gram of dietary fiber.

Using regular sesame seeds will provide you with a similar texture and taste as poppy seeds – but it will lack a nuttiness in taste compared to toasted sesame seeds.

1 tablespoon of whole dried sesame seeds contains about 52 calories, 4.5 grams of fat, 2 grams of carbs, 1.6 grams of protein, and 1 gram of dietary fiber.

They come from the seeds of the flowering plant Nigella sativa, which is found throughout Turkey, Syria, and parts of Iraq.

Nigella seeds are a member of the Ranunculaceae family, which also includes flowers such as the buttercup and delphinium.

The nigella seed differs from the poppy seed slightly in regards to taste. Nigella seeds tend to taste more onion-y or peppery, although some people do not a nuttiness to them.

Because of this, nigella seeds would be best used in savory dishes such as curries, vegetable dishes, and lentil dishes.

Often in India, they mix nigella seeds into their traditional naan bread. You can also add these seeds as a topper to a meal such as salads to provide a flavorful crunch.

Nigella seeds are packed with antioxidants and are also a good source of fiber, calcium, iron, and magnesium.

Hemp seeds are great seeds that can be used to replace poppy seeds in any recipe. Hemp seeds come from the hemp plant, Cannabis sativa.

They are from the same species as cannabis (marijuana), but a different variety. Hemp contains only trace amounts of THC, the psychoactive compound in marijuana.

Uniquely, hemp seeds are a complete protein – meaning it contains all of the essential amino acids the body requires from food to synthesize protein and carry out other vital actions in the body.

This special characteristic is usually reserved for animal products. This makes hemp seeds a fan favorite amongst vegans, vegetarians, and plant-based eaters.

Hemp seeds are rich in the amino acid arginine, which produces nitric oxide in your body.

Nitric oxide is a gas molecule that makes your blood vessels dilate and relax, which can lead to lowered blood pressure and a reduced risk of heart disease.

Hemp seeds contain a higher amount of protein and a lower amount of fiber compared to the poppy seed.

Celery seeds can also be used as a poppy seed substitute. They provide an earthy bitter scent/taste and, naturally, taste a lot like celery.

Therefore, they would best be used in a savory dish.

Celery seeds resemble poppy seeds in their small size and shape. They are light brown in color.

Celery seeds are rich in calcium, manganese, iron, and magnesium.

1 tablespoon of celery seeds contains about 25 calories, 2 grams of fat, 2 grams of carbs, 1 gram of protein, and 1 gram of fiber. This makes them the lowest-calorie poppy seed substitute.

Similar to sesame seeds but black, Basil seeds are considered another substitute for poppy seeds.

These seeds are usually used to season food and have a very crunchy texture with a mild floral taste. Basil seeds are a good source of calcium and iron.

1 tablespoon of basil seeds contains 60 calories, 2.5 grams of fat, 7 grams of carbs, 2 grams of protein, and 7 grams of fiber.

Amaranth is a gluten-free ancient grain that has been gaining recent popularity (most likely because ALL ancient grains have).

Poppy seeds are oilseeds obtained from the opium poppy plant. The poppy plant is native to the Eastern Mediterranean.

Its flowers come in various colors — primarily white and yellow. The seeds the poppy plant produces are small and kidney-shaped.

They taste slightly nutty and some would say slightly sweet. Poppy seeds range in color from blue-ish to black, or light to dark gray – depending on where they’re cultivated.

Poppy seeds have been harvested by various civilizations for thousands of years. They are also known as khus khus.

These fats are often known as the ‘healthy fats’ and have been associated with overall health and lowered risk for cardiovascular disease.

Poppy seeds are also a great source of fiber and micronutrients such as copper, calcium, magnesium, phosphorus, zinc, thiamin, and even iron.

Of note, poppy seeds are particularly rich in manganese – just one tablespoon provides you with 26% of your Daily Value (DV).

It also plays a role in fat and carbohydrate metabolism, calcium absorption, and blood sugar regulation. Manganese is also necessary for normal brain and nerve function.

Whether you’re making Everything bagels, lemon poppyseed cake, or whatever your heart desires that may traditionally call for poppy seeds – rest assured that you have options if you don’t wish to (or can’t) use poppy seeds.

I hope this article has provided you with some insight on what may be the best poppy seed substitute for your recipe. Have fun exploring!