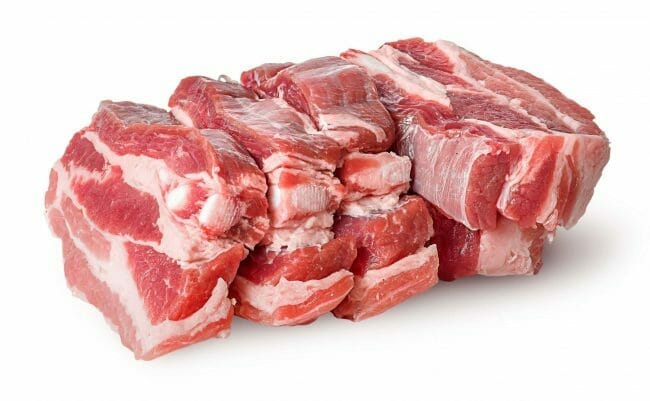 A flavorful and unique cut of pork, a pork belly is not the easiest of meats to come by on the market. Unlike pork butt, ribs, or a roast, they’re not commonly carried in major supermarkets despite their popularity as a tender and flavorful meat.

The expense that comes with an ingredient like pork belly also makes supermarkets hesitant to carry them as an option.

The art of cooking sometimes includes finding the right alternative if the desired ingredient isn’t available. There are different pork belly substitutes on the market which don’t have to compromise taste and texture. Sweeter than other types of meat, finding a substitute may not seem easy, but it can be done.

When pork belly is not available there are other options for cooking without it. Pork, beef, goose, duck, and turkey bacon are all on the market as potential substitutes with turkey bacon the least used in these situations.

There are other cuts of meat available as well such as fatback meat and shoulder cut. Vegetarian options are also possible through the use of soy, tofu, tempeh, and beans.

Though it also comes from the belly of the pork, it’s not a pork belly; just as much as pork belly isn’t bacon. A pork belly cut is an entire slab from the fleshy part of the belly, and bacon is a smaller cut of that slab.

As many are aware, bacon can also come from other animals, in which case it’s no longer pork bacon, and it undergoes additional processing before it’s deemed cured bacon. Pork bacon is considered the best substitute for pork belly.

Both cuts of meat are from the same part of the pork and have a similar taste even if the texture is a little different. There is little to no difference in the dishes when it comes to using this cut of meat as a substitute.

The only thing to keep in mind when using pork bacon as a substitute is the difference in the amount of salt each cut of meat contains. Pork bacon is saltier than a pork belly.

When preparing a meal, it’s prudent to use less pork bacon than what the recipe calls for, tasting throughout for the best outcome. It’s even possible to make your own pork bacon at home, adding just the right amount of spices and seasonings to fit the bill.

As the name suggests, beef bacon is made from the belly of a cow rather than pork. Leaner than pork meat, beef bacon doesn’t have the same juicy fat, making it drier in comparison to pork bacon.

With a higher melting point, it’s harder to achieve the same level of crispiness that people crave from pork bacon.

Versatile and similar in taste to pork belly or pork bacon makes beef bacon a great substitute. In many dishes, it’s impossible to recognize that another cut of meat was used.

Using pork seasonings helps mask any left-over difference between the cuts of meat in terms of flavor in the dish. As an added bonus, beef bacon is a leaner type of meat, with less fat, which means it can be enjoyed for all the pleasures of bacon without the guilt.

Similar to pork belly, pork fatback is the meat on the backbone of the hog. Used for various purposes such as extra flavor, adding moisture, or as a cooking medium, it’s also a good pork belly substitute. In fact, it comes from the same place on the pig as lard does, though they are not the same thing.

The style and flavor of fatback are much the same as pork belly, with fatback containing a higher content of fat giving it a soft texture much like pork belly. The best thing about using fatback as a substitute for pork belly is that it is used in much the same way.

A fatback slab can be roasted, sautéed, braised, turned into bacon, and anything else a recipe might indicate. Spice the meat like the recipe asks and as long as a layer of fat doesn’t turn you off the meal, there will be no difference in flavor.

For more of the same ratio of meat, use more fatback than what the recipe calls for in pork belly, since the fat is likely to burn off during cooking.

Fatback or even the below-mentioned pork shoulder is not something households cook routinely, but there is a fine recipe that shows off the strength of these two cuts of meat which can be used instead of pork belly.

Also known as the pork butt, this meat is cut from the shoulder of the pig. Since a shoulder cut is not an easy cut of meat to find, it’s not a popular substitute.

Those lucky enough to find a pork shoulder in their local grocery store will find it works as an inexpensive and acceptable substitute for pork belly. For time-saving reasons, purchasing the boneless option is best.

The cut of meat will still have the right amount of fat and meat content to work in any recipe. Before cooking, the recommendation is to marinate the meat in desired seasonings for at least an hour before cooking.

Works great for grilling, frying, or baking, shoulder cuts can be cooked just as directed by the recipe.

Goose meat is a good substitute for pork belly as long as the fattiest part of the bird is available. The fat on the goose will give the meat the same texture that’s expected from using pork belly, with a little compromise on flavor.

The bacon form of goose is the best meat to use out of the bird when substituting for pork belly. This is because the bacon provides a good balance of the sweet flavor that’s similar to that of pork belly and the fatty texture.

Of course, they are not exactly the same, since goose tends to be tougher meat and should soak in oil for at least an hour.

Duck as a substitute for pork belly is challenging, especially since the best option would be to get duck bacon, rather than any other part of the fowl. Though it’s possible to find duck bacon on the market, it’s not a common ingredient found in larger supermarkets.

But, if you end up finding some, it becomes a good substitute for pork belly and can be cooked the same way. More seasoning might be in order to achieve the right flavor and hide any gaminess.

The last resort, when you’re all out of options, is turkey bacon. Turkey bacon isn’t listed as a substitute often since it’s not a popular one. Most of the time, it’s used as a substitute for pork bacon for those who are looking for a healthier alternative or for religious reasons.

Of course, though it has fewer calories and fats, it should still be used in moderation due to high sodium and saturated fats. Typically substituting ham, it’s possible to use turkey bacon as a substitute for pork belly so long as pork seasonings are incorporated.

This way, the meat will have a higher chance of having the desired taste.

A popular choice to substitute many types of meat, soy has a similar type of texture. Cheap and easy to cook, dried soy is readily available at most supermarkets.

Soy acts like a sponge, soaking up the water it’s getting boiled in almost immediately. This stage is important because you’ll want to add all the appropriate seasonings to the water.

Seasonings are the key to making soy reach the desired taste. Without seasonings, boiled soy doesn’t have a taste and wouldn’t enhance any recipe.

However, once the soy is boiled with the right seasonings to make it taste more like pork belly, it can get placed straight in as a substitute.

Made from soybeans, it’s in the category of soy products, much like the tempeh which will be mentioned below. A versatile product, tofu is often criticized for being bland, however, that could only work as an advantage in a substitute.

Essentially, tofu is a blank canvas, waiting for the right seasonings to get applied. Tofu is a popular product for many reasons, which means there are many varieties available on the market.

Some options are specifically designed to substitute meat. To make tofu taste more like the pork belly it’s going to substitute, soaking it in water with the right ingredients will go a long way.

A plant-based alternative for pork, tempeh is considered a superfood. Made from a combination of soybeans and slightly fermented grains, it has a rich flavor and meat-like texture. Stores carry tempeh already pre-seasoned to help cut down on the work at home.

Tempeh comes frozen making it all that much more important to thoroughly cook it throughout before consuming. Another piece of good news is that tempeh can be cooked much like pork such as fried or barbecued.

Pork belly can be substituted in certain dishes such as chilis and soups with beans. Even in dishes that call for beans, pork belly can be changed out with a different type of bean. In the end, this will add more flavor, texture, and variety to the recipe.

Beans come in all shapes, sizes, and flavors and there’s no harm in experimenting with them. when using them as a meat substitute, it’s important to remember they won’t need to be cooked as long as meat and cooking time should stay under one hour.

How To Choose The Best Substitute For Pork Belly

There’s no one right way to choose a substitute for them. In the end, it’s all a matter of taste since most supermarkets will have other cuts of meat readily available. However, here are a few things to keep in mind.

Sometimes the substitute chooses you since other cuts of meat are not available. Pork and turkey bacon might be more readily available at most major stores than goose or duck.

Substituting with a vegetarian option will require some patience and creativity. The key is to replicate the taste and texture of pork belly meat which might take some trial and error.

Pork belly is a flavorful and fatty piece of meat that has plenty of substitutes. Each cut of meat offers something special to the dish but can blend in well if pork belly is not available.

The vegetarian options are also delicious and perfectly integrate into the recipe. All you need to do is follow the recipe, paying special attention to any changes that might need to be made along the way.