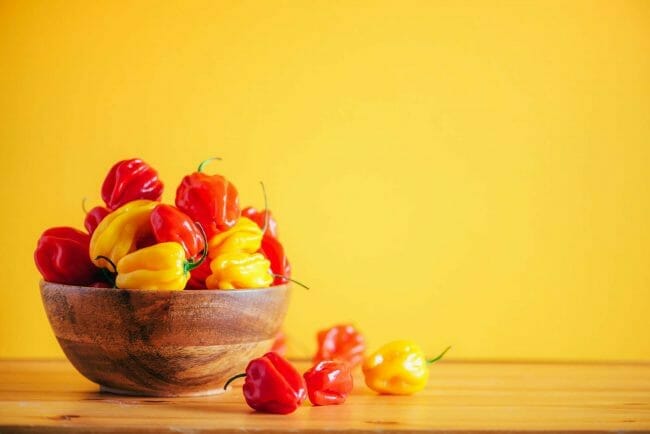 One of the world’s hottest peppers, scotch bonnet peppers are often used in Caribbean cooking.

They have a spicy, smokey, fruity, and slightly sweet taste that makes them a flavorful addition to hot sauces, seasonings, pickles, curries, and meat dishes.

It belongs to the family of Capsicum Chinense chilis and is a cousin of the habanero pepper.

If a recipe calls for scotch bonnets but you or your little ones can’t tolerate their heat level or are allergic to this ingredient, we’ll give you a list of healthy, gluten-free, and kid-friendly substitutes. You can easily add these substitutes to your curries, sauces, and other dishes for that extra kick of spice. For example, scotch bonnets can be substituted with jalapenos or red Thai chilis in pickles and jams. African bird’s eye peppers and ghost peppers can also easily be used in hot sauces and dips.

Here is our list of 10 healthy alternatives to scotch bonnet peppers that you can try in your cooking.

A lot of Jamaican dishes call for hot pepper sauces made from scotch bonnet peppers.

If you’re making a Caribbean-inspired hot sauce or seasoning but don’t have these peppers with you, toss in a ghost pepper chili instead.

Also known as Bhut Jolokia, ghost peppers have a Scoville heat scale rating of 855,000 to 1,041,427 units, making them seriously hot and spicy.

Use them sparingly to create a rich, spicy, flavorful dish that you and your family can enjoy together.

A cousin of the tabasco chili, African bird’s eye peppers aka piri piri chilis are a small, red, hot chili found in the African wild.

If you’re making a hot sauce, seasoning, or dip and need a healthy substitute for scotch bonnet peppers, add in a few African bird’s eye peppers.

You can use scotch bonnet peppers to create spicy jam or jelly to enjoy plain or later use as a marinade or rub. High on spice, these peppers are also fruity and slightly sweet.

However, if you don’t have them in stock, you can always go for red Thai chilis for their similar heat levels.

These chilis also have a slightly fruity taste and taste wonderful in jams, jellies, and pickles.

Spiced jams and pickles are a great way to use up extra scotch bonnets and preserve them throughout the year.

If you are looking to make jelly or pickle with these peppers but have run out of them and are now wondering what you can use instead of scotch bonnets, sub in some jalapenos.

Although they lack the fruitiness of scotch bonnets, these mildly spicy peppers are great in pickles and jellies and are also a healthy and kid-friendly alternative to the latter.

You can easily pick up some from your local grocery store or supermarket to make a pickle or jelly out of them.

Jamaican curries and soups are often made with scotch bonnets that help to give these dishes a spicy zing.

In case you’ve run out of this ingredient, throw in a tabasco chili. These chilis are lower in heat levels compared to scotch bonnets but pack in a lot of flavor and spice. You can also use tabasco sauce if you have some.

Scotch bonnets go well with stir-fries, sauces, soups, and stews. If you don’t have them in your pantry and are now thinking, “What can I use instead of a scotch bonnet pepper?”, try serrano peppers instead.

Although they have a good amount of heat, they are less spicy than scotch bonnets and are also mildly sweet.

This makes them a suitable alternative to scotch bonnet peppers, especially for your kids and other family members who can’t bear the heat levels of the latter.

Scotch bonnet peppers are a great balance of spice and overall taste for those who enjoy spicy food.

If you don’t have scotch bonnet peppers at hand, you can substitute them with habanero peppers.

The latter has a similar spicy, fruity, and mildly sweet flavor profile, making it a great addition to the above meat preparations.

If you need a quick substitute for scotch bonnet peppers, go for Sriracha sauce.

It is a hot sauce made from dried and ground chili peppers, garlic, vinegar, salt, and sugar and is a wonderful addition to spicy pork chops and other fiery meat dishes. You can easily find it in your local supermarket or source it online.

What’s more, this sauce has a relatively less spicy flavor compared to scotch bonnet peppers and can be enjoyed by your little ones as well.

Believe it or not, scotch bonnet peppers are added to desserts and baked goods, too, for a spicy kick.

If you’re making muffins, cookies, mousses, or sorbets and the recipe needs some scotch bonnet peppers, use red cayenne peppers instead.

They have a spicy flavor but not so much that your kids can’t have it, making them a kid-friendly option as well.

Adding a sprinkle of spice can take your desserts up a notch, which is why spiced ice creams, sorbets, and mousses may call for some scotch bonnet peppers. If you don’t have this ingredient in stock, substitute it with paprika.

A spice made from ground red peppers, paprika will add just the right amount of zing with a hint of sweetness and earthiness.

Its heat level is lower than scotch bonnet peppers, making it suitable for your children, too.

Do Habaneros And Scotch Bonnets Have An Unpleasant Soapy Taste?

Some people find that scotch bonnet peppers and habanero peppers have a soapy, chemical-like taste.

This is probably due to the presence of saponins (plant compounds with soap-like properties) in them.

However, it depends on individual tastes; not everyone can detect the saponins in these peppers.

Does Scotch Bonnet Have The Same Taste As Habanero Peppers?

How Much Scotch Bonnet Chilli Is Tolerable?

Scotch bonnet peppers are really spicy and are better not overused. A few thin slices of the skin will suffice for a moderate amount of spice.

You can add a few seeds to the mix to increase the heat level.  If you can tolerate a good amount of heat, you can use half or one whole pepper.

Are Scotch Bonnet Peppers High On The Scoville Scale?

Yes, scotch bonnet peppers rank high on the Scoville heat scale at 100,000 to 350,000 units, which will give you a good idea about how spicy they can be.

What’s The Equivalent Number Of Habanero Peppers For One Scotch Bonnet Pepper?

If you’re substituting Scotch Bonnet Pepper with habanero peppers, it’s best if you use one or just half in place of one scotch bonnet pepper.

Which Is Hotter Among Ghost Pepper And Scotch Bonnet Pepper And How Much Spicier Are They Than A Habanero?

Scotch Bonnet Peppers are hot, while Habaneros are mildly spicier. Both fall between 1,00,000 to 3,50,000 on the Scoville Scale.

Are Scotch Bonnet And Ghost Peppers The Same?

Despite their resemblance, ghost peppers are much hotter than scotch bonnet peppers.

Also, ghost peppers originate in Northeast India, whereas the latter was originally cultivated in West Africa and the Caribbean Islands.

How To Use Scotch Bonnet Peppers?

Scotch bonnet peppers can be minced or sliced finely and used in curries, stews, soups, sauces, jerk chicken, and even desserts. You can also grind and make a paste of them to use as seasoning or sauce.

Is Scotch Bonnet Pepper Good For You?

These peppers are highly beneficial for weight management and congestion relief. They can also be used to alleviate pain, asthma, headaches, bad breath, and heart disease.

Scotch bonnets are a healthy, delicious ingredient that you can add to a whole lot of dishes.

If you can’t use them due to health issues or simply lack of availability, try any of the substitutes that we have mentioned above.

They are about as healthy and tasty as scotch bonnets, and some of them are even less spicy, making them suitable for those who can’t tolerate too much spice.

Have you tried any of the scotch bonnet substitutes from this list? What do you think of them? Tell us in the comments below!