What To Serve With Chicken Tortilla Soup? [Toppings & More] 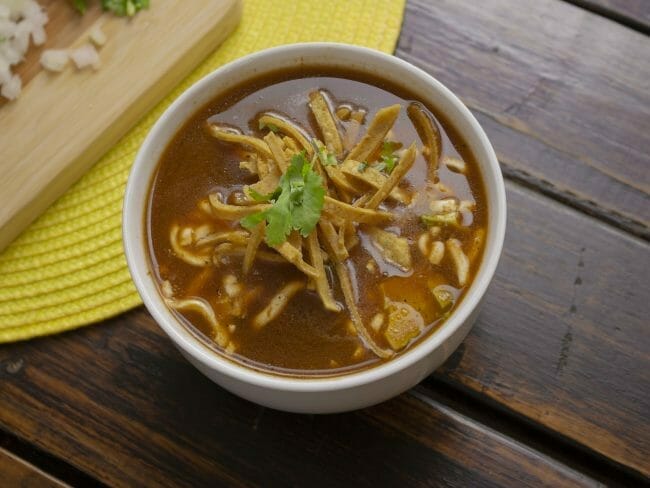 Have you ever had that friend who looks fabulous in everything, and wonder how she does it?  Sometimes I look at soups and think the same.

Some soups are staid (Chicken & Dumpling),  some are elegant but bland (Cream of Cauliflower), but Chicken Tortilla Soup always arrives with pizzaz.

It just has style!  And soup, just like your fashionable friend, needs the proper accessories to give it the right amount of chic and poise.

Chicken Tortilla Soup pairs best with side dishes whose flavors have a little extra strength.  They need to match the acidity of the tomatoes and the warm, nutty taste of the cumin.

Leafy green salads, vegetable salads, sandwiches, and bread would be my first choice to pair with Chicken Tortilla Soup.  Make sure they have distinctive flavors that are savory and earthy, like chili pepper, or fresh and tangy like tomatoes, onions, and jalapeños.

What Is Chicken Tortilla Soup And Where Can I Find It?

There are thousands of chicken tortilla soup recipes, but the most common is a whole chicken simmered in broth, combined with tomatoes, spices like cumin or oregano, and topped with tortilla strips.

It’s a great soup to have for lunch, dinner, and even freeze for later. It can take an hour or two to make it homemade.

But this popular soup can now be found on the menus of American, TexMex, and Mexican restaurants and is also one of the more popular soups sold at Costco.

What To Serve With Soup When It’s A Main Course?

When soup is served as a main course you will want your sides to complement it with texture, color and flavor.  Chicken Tortilla Soup can be served as a side-dish, but most commonly it’s a main.

With Chicken Tortilla Soup served as a main course, most of the protein is in the soup, so focusing on toppings, vegetables, sandwiches, and bread as potential side dishes will round out your meal.

What Toppings Can I Serve With Chicken Tortilla Soup?

Do my outfits really need jewelry?  No, but the right amount of accents can transform a closet staple.

Toppings for soup are the same. It lets everyone customize their own.  Plus, it’s fun passing all the bowls and getting the conversation started.

Some of my favorite toppings for Chicken Tortilla Soup are the same choices I would put on tacos.

And just like taco night, a generous amount of freshly fried tortillas – this time in thin strips, makes for a memorable meal.

What Salad To Serve With Chicken Tortilla Soup

Soup and salad are always a winning combination; like a breezy scarf on a summer’s day.

And with Chicken Tortilla Soup and salad, you can make your side dish a distinctive part of your meal by adding color and flavor.

With a fresh lettuce salad, add avocados on top, along with peeled and sliced oranges.  The tangy orange is a bright welcome compared to the earthy tones of the soup.

For a protein-rich salad, add some grilled shrimp or lump crab.  Both of these shellfishes are sweet and just like the oranges, you’ll enjoy the delicious contrast with the soup.

I love vegetables and you can think of them as the handbags of the meal.  They can be small or oversized, but you really do need one, so make it memorable.

I love that you can easily transform vegetable dishes with just a different oil or spice.  Here are some vegetable combinations “tailor-made” for Chicken Tortilla Soup.

Green Beans with Seasame Seeds: Rinse and snap the green beans. Saute in a pan with olive oil.  Season with salt, pepper, and sesame seeds.

This combination of sugar, salt, lime, and chili powder will make this quick side a new family favorite.

What Bread To Serve With Chicken Enchilada Soup?

Bread would certainly be a light shawl.  Without it, everyone will feel a little cold and uncomfortable, but too much and you’ll feel weighed down and sleepy.

And though there are tortillas sliced on top, a little more bread would go very well as a side dish with this soup.

The traditional Mexican rolls, bolillos, might be hard to find.  However, it is similar to baguettes, so a good french bread would be an excellent substitute.

Plus, a baguette is just substantial enough for dunking and sopping up the last drips in the bowl.

For a true Southwest flair, try pairing this soup with cornbread and adding some jalapeños and cumin to the batter.

If bread is the shawl, then sandwiches are certainly the coats.  You don’t want both!  Tortilla Soup and sandwiches will make a very hearty dinner and sure to satisfy the whole family.

Of course, the traditional TexMex and Mexican “sandwiches”, such as tacos, burritos, and taquitos would pair nicely.  But there are so many other interesting combinations to try.

This buttery-sweet combination is always a surprise hit.  It doesn’t take any more time than a regular grilled cheese sandwich.

Just rinse, core, and thinly slice the apple or pear.  (You don’t even need to peel it).  Place a layer in the sandwich and grill as usual.

Sometimes I forget about this childhood classic.  In a matter of minutes, you have that triple-decker goodness of bacon, lettuce, and tomatoes.  For a modern update, add some sliced avocados.

We all know the traditional egg salad: boiled eggs, blended with mayo and seasoning, stuffed between bread.

And we probably all grew up with a fried egg sandwich for rainy days.  But are you familiar with Denver Style Egg Salad?

This pita egg sandwich has all the ingredients of a Denver Omelet (eggs, onions, bell peppers, hot peppers, tomatoes) but is cooked flat, not folded.  Just slice the “omelet” into triangles and place it in a pita pocket.

Ah, now, our favorite – or my favorite, the shoes – well – new shoes. Yes, dessert is the shoes of the meal.

I don’t like my shoes too fancy, but I do like some flair. And just like my favorite shoes, I want a dessert where I can “put my best foot forward”.

For an understated but memorable final course, I love this do-ahead dessert.  Boil orange juice, simple syrup, and a cinnamon stick.  Remove.

Chocolate is an excellent dessert with spicy food and goes very well as a dessert for Chicken Tortilla Soup.

Chocolate doesn’t overpower the heat, but stands tall with a self-assured grace.

Before you choose to serve cookies or cake, even chocolate ones, first evaluate how much bread you’ve already served.  If you’ve had a lot of bread, maybe stick with the fruit.

Now that we have the perfect outfit, there’s always that nagging question – Does this soup make me look fat?  The answer usually lies in the accessories, or in this case, the side dishes.

Homemade Chicken Tortilla Soup doesn’t have a lot of calories.  For most homemade recipes, it’s under 100 calories for an 8-ounce cup.

Even Costco Chicken Tortilla Soup is just over 100 calories for a cup.  That’s fantastic on the calorie count, however, be careful with the sodium.

Just one cup of Costco Chicken Tortilla Soup is 25% of your daily sodium. If you’re like me, you’ll probably have more than 8 ounces and that’s an awful lot of sodium in just one bowl.

Other store brands are the same with over 600mg, or 25%, of your daily allowance of sodium per serving.

But it’s all the same soup really: shredded chicken in a chicken tomato broth with fried tortillas strips on top.

The combination of side dishes is endless, with toppings you’d normally put on tacos, to pairing it with flavorful sandwiches, hearty breads and fresh salads.

Try to balance the earthy flavors and spicy ingredients with vegetables, bread, or fruit.

By choosing a different side dish each time, your main dish might be the same, but your meal will be fresh and new.

And dare I say, since Chicken Tortilla Soup is already a dish that comes, “dressed for success” with these quick and flavorful side dishes, you’ll be “stepping out with confidence” at each meal.

Kelly is a native of California.  After graduation from UCLA, she began her travels living and cooking in Europe, Asia, and the Northwest.  In Tokyo, she earned the Grand Diplôme, for both Cuisine and Pâtisserie at Le Cordon Bleu.

Kelly is a freelance food writer.  She started the website, Tokyo-Table.com, where she reviews Tokyo restaurants from the perspective of a professional chef.  Kelly has written for publications in Asia and North America on all aspects of cooking.  Kelly now lives in Los Angeles with her family and her vegetable garden.