Why Are Shrimp So Expensive? 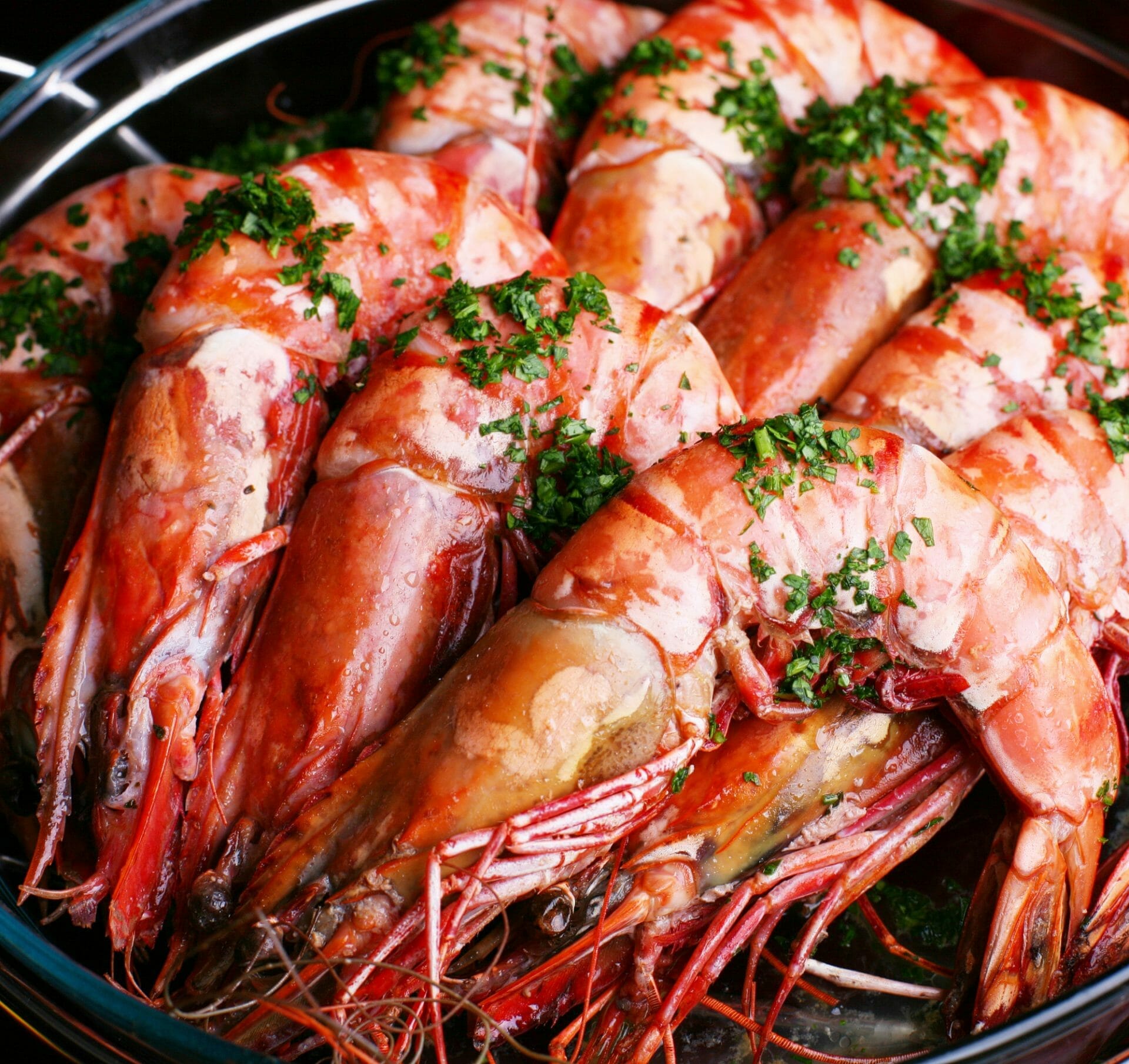 Chinese culture postulates that shrimp bring good fortune and happiness to those who consume it. This may be due to the great health benefits and delicious dishes that this shellfish is a part of, but either way, it is a fantastic fare!

However, shrimp is surprisingly expensive for being such small seafood. What brings this large price tag?

Shrimp is popular! The demand is high for this healthy protein source, but unfortunately, poor farming practices can bring a low yield of this product. Disease can cost the industry billions and the consumers pay the price.

Moreover, the majority of shrimp are exported, increasing the cost even more. Lastly, shrimp type plays a part in the price. Just like there are more coveted cuts of beef, certain species of shrimp are more expensive due to their impressive size and ideal flavors.

Tiger, Royal Reds, Rock and Pacific White Shrimp are the most expensive varieties of edible shrimp.

This is due in part to their large size as well as the quality of the environment where they are harvested. Most are caught in the wild, meaning less disease and a longer time to mature.

The most common shrimp types are white, brown and pink. The large quantities of these species helps to lower the cost. They are what you normally see in the seafood section at the supermarket.

Canned shrimp is the most affordable option though, running just a few dollars per can. Additionally, frozen varieties will always be cheaper than fresh.

Lastly, shrimp left in the shell that have not been deveined are also less expensive. This is because the preparation is placed on the consumer, lowering labor costs.

Top Five Factors For The Expensive Cost Of Shrimp

“Shrimp is the fruit of the sea. You can barbecue it, boil it, broil it, bake it, saute it. Dey’s uh, shrimp-kabobs, shrimp creole, shrimp gumbo. Pan fried, deep fried, stir-fried.

In the award-winning movie Forrest Gump, Bubba Gump’s Shrimp Company was inspired by the character Bubbu Blue and his love of this versatile crustacean.

Unlike other seafood, shrimp is utilized in almost all styles of cuisine, no matter what the country of origin.

Furthermore, shrimp is regularly used in appetizers and as the main course of a meal. The universal nature of this small protein source makes it extremely popular.

In fact, “shrimp is the most popular seafood eaten in the United States. It represents over 25 percent of the nation’s annual per capita seafood consumption.” This high demand drives up the cost, making shrimp much more expensive.

The United States is the world’s leader in seafood imports. The Food and Agriculture Organization of the United Nations reports “seafood imports have tripled in the last 20 years to reach a total value of USD 20.16 billion in 2016.”

With the average American consuming over four pounds of shrimp each year, it should come as no surprise that there is an expensive price tag with the high demand.

Unfortunately, this is only exemplified by the problems that arise in aquaculture practices.

According to the U.S. Bureau of Labor Statistics (BLS), “the reason for the higher shrimp prices is a shortage of imports from the top shrimp producers in Southeast Asia.

With about 90 percent of shrimp consumed in the United States coming from imports, any change in foreign supply affects both U.S. import prices and overall consumer prices.”

What you may not realize is that the price you pay at the grocery store reflects not just the cost of the shrimp. It also includes taxes, insurance and transport fees to get the shrimp to the seafood section.

Moreover, when factors like fuel costs increase, you don’t just pay that at the pump. You also fork out the money to cover the cost of shipping in your favorite foods from other countries.

Aquaculture is the farming of aquatic plants and animals. 55% of the shrimp you consume comes from these types of farms.

BLS further reports that “a large contributor to the seafood price increases was a disease-related decline in supplies from the top three shrimp-producing countries: Thailand, Vietnam, and China.”

Unfortunately, these environments produce a lot of shrimp in a very small space. That equates to the rapid spread of diseases. “The nature of shrimp farming makes the shrimp highly susceptible to disease.

Eighty percent of world shrimp production takes place on small-scale, open-air systems in which water flows in and out between ponds.

One of the leading factors behind the higher import prices is the early mortality syndrome (EMS) epidemic that has affected supplies in Southeast Asia.”

Moreover, when the shrimp die, they float to the surface. Birds will eat this easy prey. Then when they defecate, this spreads the diseases farther out.

Additionally, “the disease [also] spreads quickly as shrimp eat and infect other shrimp, and it can wipe out a pond’s entire shrimp population within a matter of months.”

These losses cost billions of dollars each year. In turn, the price of shrimp becomes more expensive to recoup the losses.

High in protein and low in fat — shrimp is the ultimate healthy snack! Health experts note that “the health benefits of shrimp may include improved bone and brain health, weight management, and a lowered risk of cardiovascular disease.

Shrimp has anti-inflammatory and anti-aging properties that can help to reduce the risk of various health ailments.”

This tasty shellfish is also high in B vitamins and iron. Most impressively though, a three ounce serving contains almost half of your recommended daily value of selenium!

This antioxidant is key in maintaining your immune system. Thus, the more shrimp you eat, the healthier you will be in the grand scheme of things!

The bigger, the better! Size matters with shrimp. When they reach enormous proportions, they are called prawns.

Giant tiger shrimp are the biggest edible shrimp available. These can reach up to over five ounces in certain regions like Australia! Thus, if you buy large shrimp, expect to pay more.

However, they are not going to provide much meat. This is because these varieties are dwarf shrimp! Thus, these shrimp serve as expensive pets.

How To Extend The Shelf Life Of Shrimp?

Seafood has a short shelf life. The time frame for safe storage is dependent on a number of factors. These include whether the shrimp have been shelled or not if they are raw or cooked and if they are fresh or frozen.

Finally, canned shrimp can last 6-8 months in the pantry when stored out of direct sunlight and at room temperature.

However, in order to extend the shelf life, it is always best to freeze shrimp that you don’t intend to use within a few days.

This allows them to last up to six months when properly stored. If placed in a vacuum-sealed bag, the shrimp can span a longer time.

Otherwise, the texture can change past the three-month mark. Therefore, when you see a sale on shellfish, stock up and save!

For those who cannot afford this expensive option, crawfish are a spectacular substitute that have the same texture and appearance. This crustacean is a delicious alternative that runs under $4 per pound.

Additionally, there is a soon to be released imitation shrimp that is made out of plant proteins and red algae.

It looks identical to the shellfish and has the same texture. While the flavor differs, if you plan to fry it or cover it in sauce, the change is hard to notice. It is also a perfect option for vegans and vegetarians and it is!

Whether you are ordering shrimp scampi, shrimp cocktail or potted shrimp, expect a higher price tag. This savory seafood is a luxury item in many restaurants.

In order to get the best bang for your buck, skip the restaurant dishes and make your own!

Buy small, cooked, and frozen shrimp. While not as impressive as the giant tiger prawns, it is the most affordable option.

They will also provide the same health benefits and a similar flavor. This also removes the worry of having to prep the seafood!

Additionally, make it a priority to buy during the shrimping season! This time frame ranges depending on the region you reside in, but it normally spans from late Spring through the early Fall months.

The pricing of shrimp is highly dependent on availability. Buying locally, at fish markets, and in-season can help to moderate the price.

“Wild American shrimp are caught by shrimpers off the Gulf and South Atlantic coasts.

While these varieties only constitute 10% of the nation’s shrimp supply, they are more affordable and much fresher!