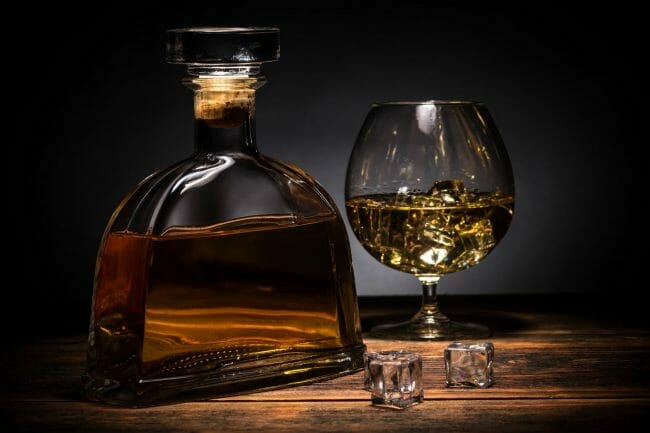 Trust the French to come up with the extraordinary, be it films, the arts, culinary delights or alcoholic beverages.

The Grand Marnier is one such French invention that has long been an American favorite.

In fact, a bottle of this distinctly French liquor was salvaged from the ruins of the Titanic.

The unique blend of fine French cognac and Caribbean oranges traveled the seas to reach the American shores in the late 1900s.

It enjoyed the pinnacle of popularity during the 1980s. There has been no looking back ever since.

America’s love affair with  Grand Marnier might have begun a long time ago, but it is still going strong.

In fact, Grand Marnier can easily turn America’s most favorite cocktail of all times, a margarita, into a rather gourmet version of itself – Cadillac Margarita.

But, Grand Marnier is a top-shelf liqueur. It is expensive. What if you don’t have a bottle of Grand Marnier on hand? Is there a substitute for Grand Marinier? Let’s find out.

There are a number of alcoholic and nonalcoholic beverages that you can substitute Grand Marinier with, the best options being Cointreau and orange extract respectively.

You can also experiment with Cognac, Triple Sec, and Orange Curaçao as well as orange flower water and orange juice concentrate. What you choose should depend on the cocktail or recipe you want to make.

Grand Marnier has a distinctive but complex flavor profile. It has a strong orange palate with notes of oak and vanilla. So, what is a good substitute for Grand Marnier?

A few other variations of brandy or even orange flavored liquor can be used as its substitute. Let’s take a look.

Perhaps the closest replacement for Grand Marnier is Cointreau. Another orange flavored liquor, both Cointreau and Grand Marnier have the same alcohol content – 40% ABV. In terms of booziness and flavor, you get an exact match.

Stop looking for a substitute for Grand Marnier in Margarita if you have Cointreau.

The best part of using Cointreau is that it is a great Grand Marnier substitute for crepe suzette, tiramisu, creme brulee, orange bundt cake, and many other desserts.

The next best Grand Marnier substitute is Cognac. Cognac is used in the making of Grand Marnier and is a citrusy brandy that easily mimics the taste of the French liquor. In fact, Cognac too leaves behind an aftertaste rich in notes of vanilla and spices.

In case you cannot lay your hands on Cognac, feel free to choose any other brandy like Rémy Martin,  Hine Antique, etc.

Keep in mind that each brandy has its own flavor profile and might lend themselves well to different recipes, depending on your core ingredients.

Stop wondering what can I use in place of Grand Marnier if you have some Triple Sec at hand.

This triple distilled dry French liquor comes a close second to Grand Marnier in terms of flavor. The only noticeable difference comes from its mouthfeel – Triple Sec is distinctly drier than Grand Marnier.

You can use Triple Sec in cocktails like cosmopolitans, sidecars, even kamikazes. The liquor is great in desserts too.

A wee bit of Triple Sec goes a long way in flavoring sweet and savory dishes.

Another obvious substitute for Grand Marinier is yet another orange liquor – the Orange Curaçao.

While not as popularly known as its close kin, the Blue Curaçao, Orange Curaçao goes really well in desserts.

You can, of course, whip up a whole army of cocktails with this spirit. In case you cannot find Orange Curaçao, any other variation of Curaçao also works well as a Grand Marnier substitute cooking.

Also known as “The Bartender’s Ketchup”, St. Germain is another French liqueur made from freshly plucked elderflowers that can be used as a Grand Marnier substitute margarita. It’s sweet yet floral taste works very well in a number of cocktails.

The freshness of the elderflowers gives St. Germain its fruity kick that’s common in Grand Marnier.

Vodka is an extremely versatile alcoholic drink that comes in many flavors. Orange-flavored vodka works as a great substitute for Grand Marnier in desserts and savory dishes.

The only noticeable difference when using vodka comes from its distinctly sweeter taste than Grand Marnier.

That’s all for the alcoholic substitutes of Grand Marnier. But in case you don’t drink alcohol but still want to enjoy a few recipes that use the liquor, check out the substitute for Grand Marnier non-alcoholic list below.

You probably guessed this one by now – a good quality orange extract is an excellent substitute for Grand Marnier.

Since extracts are highly concentrated, just a few drops are enough to bring out a rich orange flavor in mocktails or sweet dishes.

Orange extract is great for all types of bakes, cakes, and also in glazes.

You can use it to flavor mocktails, and savory dishes. Since it is infused water, the intensity of flavors is much milder compared to orange extract.

However, orange flower water more than makes up for it with its delectable aroma.

If you cannot get hold of a good quality orange extract, try an orange juice concentrate instead.

It’ll certainly be much less intense in flavor than the extract. But you can use it to make non-alcoholic mocktails.

You can use orange juice concentrate to make glazes or sauces for savory dishes – the flavor goes particularly well with fish, seafood, and chicken.

Now comes the best part – if you do happen to have some Grand Marnier at hand, try out these recipes.

Grand Mariner is a very versatile liquor and lends itself well to not just cocktails, but sweet and savory dishes as well.

Of course, the best use of Grand Marnier is in making cocktails. You can make a suave version of margarita with the liquor.

Known as Cadillac Margarita, all it takes to make the drink is your usual margarita and some Grand Marnier.

The Cadillac Margarita is a great cocktail for birthday parties, anniversaries, or other celebrations.

You can even make a Cadillac Sidecar version with Grand Marnier – just replace Cointreau with this French orange liqueur and you’re all set.

Grand Marnier works very well with Champagne as well. The possibilities are endless. Try new combinations and choose the ones you like best.

If you like baking, you’d know how well Grand Marnier works in desserts. Add a glug to your souffle, pour it over some crepes and set it afire, or try it on the dome of a baked Alaska – the world is your oyster with this liqueur in tow.

Grand Marnier works well in tiramisu, marmalades and even as a syrup to drizzle over your ice cream.

Owing to its delightful bitter sweet orange flavor, Grand Marnier works well as a glaze for chicken, scallops, seafood, or even fishes like yellowfin tuna.

Be careful while cooking with the liqueur – a hot pan can give you the flambé effect.

That said, if you’re making recipes that use Grand Marnier for kids, substitute the liqueur with one of the few non-alcoholic options listed above.

Is Triple Sec And Grand Marnier The Same?

Almost, but not quite. Triple Sec is as much of an orange liqueur as Grand Marnier, but it feels much drier on the tongue.

Grand Marnier also happens to be a proprietary blend while triple sec is manufactured by a number of distillers.

There’s a difference in pricing too – triple sec is cheaper than Grand Marnier which can be a steep purchase.

Can You Use Orange Juice Instead Of Grand Marnier?

If you’re looking for a non-alcoholic substitute for Grand Marnier, orange juice could be one of the many options to choose from.

However, to mimic the intense flavor of the liqueur, it is best to use orange extract instead of juice.

Can I Use Cointreau Instead Of Grand Marnier?

Cointreau is an excellent choice to replace Grand Marnier in common cocktails and even dessert recipes.

Since both blends contain the same amount of alcohol by volume, they can act as each other’s replacement very well.

What Can I Use Instead Of Orange Liqueur?

If you don’t want to use orange liqueur in your cocktails, or want a high-end version of regular cocktails – opt for Grand Marnier.

If you want to make a non-alcoholic beverage, choosing orange extract, or orange flower water could be a good option.

Either way, there are more than one option for you to choose from.

You can probably discern by now that Grand Marnier is indeed a grand liqueur. It is distinctive, flamboyant, and versatile – a unique combination of French finesse and craftsmanship.

So, if you’re keen on adding a little something to your home bar that’d be the envy of your neighbors and friends – Grand Marnier is the way to go!

If you want to keep your options open (as good homemakers should), take a long look at what is a good substitute for spelt flour and you’ll be all set to turn heads.

Whatever your choice may be, don’t forget to indulge yourself with an occasional Grand Marnier peg or two. After all, you deserve to celebrate!