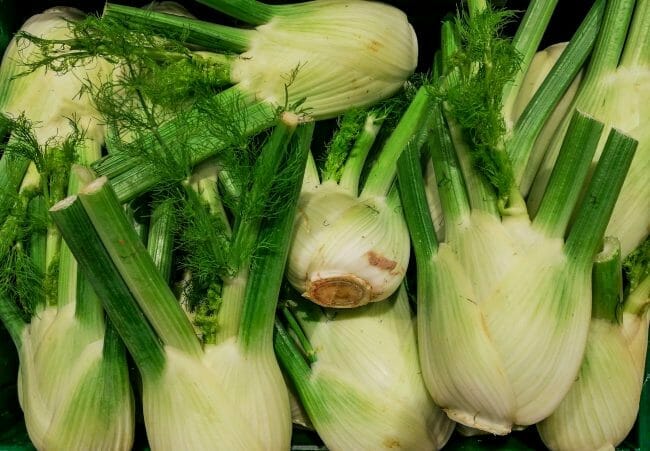 It’s gnarly, it’s ugly, it weighs a ton and looks like a lumpy potato. What am I speaking of? The humble celery root, of course!

It may have lowly beginnings, but celery root is a delicious vegetable that has versatile uses in soups, salads, and a variety of other recipes.

Celery root is a sweet and refreshing root vegetable that when cook, can be mashed up into purees or used in stews much like a potato.

While an excellent source of vitamins and minerals, celery root is not as easy to locate as celery stalks or other root vegetables.

Its lack of popularity means that often your local grocery store may not carry it, despite its versatility.

If you’re using a recipe that calls for celery root, you may find yourself needing to resort to substitutions.

Even though celery root can be hard to find, there are a number of great substitutes that you can find at nearly any grocery store. From carrots and parsnips to jicama and turnips, there are plenty of delicious substitutions sure to fit your culinary needs.

Whether you’re chopping up a fresh salad or making a creamy and delicious soup, we’ve got an amazing list of swaps for your next grocery run!

Carrot makes a fantastic swap for celery root, especially if you are making a rich, earthy stew.

When celery root is cooked, its starches release and it becomes sweet and soft.

Cooked carrot emulates both the texture and sweetness of celery root, making it an ideal substitution.

You can also julienne carrots to add a nice crunch to a salad that calls for sliced fresh celery root.

Carrots are an excellent source of vitamin A, making it a great health choice as well!

If you are seeking that celery flavor, look no further than the lovely parsnip. Packed potassium and vitamin C, parsnips will give you a great health boost while keeping the same flavor and mouthfeel as celery root.

Traditionally, celery root and potatoes make a popular combination to boil and mash together.

Parsnip makes a great substitute in this dish if you can’t get your hands on some celery root, or if you are just looking for a change!

When substituting parsnips for celery root, be aware that it has a strong aroma and can be overpowering.

Parsnips are also a bit sweeter than celery root, so taste as you go and be ready to adjust the amount of salt or sugar you need for your dish to get the right flavor.

Jicama makes the best substitute for celery root in salads. Why? Jicama is a starchy root vegetable that is slightly sweet, crunchy, and has a very mild apply flavor.

Its excellent crunch, texture, and mild flavor make it a great sub. Jicama will jazz up any salad and you’ll hardly miss the celery root!

To serve jicama, be sure to remove the tough outer skin, which is not edible. Though preparing it can be a little touch, jicama is sure to be a crowd pleaser in a variety of fresh salads.

Jicama is loaded with potassium and vitamin A and has become increasingly popular to use as a substitute for corn tortillas because it is able to be sliced so thin and holds its shape.

Try some jicama in your salad the next time you are at the market, and see what you think!

Celery ribs are an obvious choice as a substitution for celery root, as they are simply different parts of the same vegetable.

They have a pleasing crunch and similar flavor to celery root that will fit great in many salads.

Celery ribs will not offer the same starchy consistency found in celery root, so if you are wanting to swap in a cooking recipe be judicious.

Celery ribs are of course extremely healthy, being very low calorie and full of vitamins A, C, and K.

Parsley root is often confused with parsnips due to their similar size and shape. They both look like large white carrots!

Parsley root makes a great substitution for celery root due to its similar crunchiness, sweetness, and starchiness.

It’s also an excellent source of vitamin B9, containing nearly half your daily needs in a single serving!

Slice it thin in a salad for some sweet crispiness if you’d like! But parsley root also makes a fantastic swap in sauces and mashes.

Cook the parsley root like you would celery root or potatoes, mash it up with some butter, salt, pepper, and a little cream, and you have a delicious sauce or mash depending on your consistency!

Much like the parsley root, turnip is both sweet, crunchy, and starchy, making it a very versatile and easy substitute for celery root.

Turnip puree can be made much like the parsley root or a traditional celery root recipe.

Simply boil with salt until soft, then add cream, butter, cheese, and any other goodies you like and mash until you get a silky-smooth consistency.

This puree can be used as a base for roasts, tossed with some pasta for a modern pasta dish.

Though adding all that cream and butter may diminish its health value, turnip is an excellent source of vitamin C.

Daikon radish can be a little harder to find than some of the other items on this list. You’ll be sure to find it at any Asian grocery store.

Daikon radish looks like a long sweet potato, but it is white instead of orange. It is slightly sweet and has a delightful crunch, and is delicious both raw and cooked.

Daikon radish is fantastic cut up and added to a pot roast or other slow cooked meats.

Change up your traditional Sunday roast by adding in some daikon with your carrots and potatoes!

You can also pan or stir fry it to add a nice crisp texture to your veggies. Daikon can be mashed and pureed, but it won’t achieve quite as creamy of a consistency due to its lower starch content.

Daikon radish is also a very healthy swap, as it is not only quite low calorie, but also contains 124% of your daily recommended dose of vitamin C in only one serving.

My personal favorite on this list, fennel bulb is an amazing swap. Fennel bulb has a distinct anise flavor, is slightly sweet, and delightfully crisp when raw.

Sliced up thinly it is delicious in a fresh salad, while cooked the sugars caramelize and it becomes more intensely sweet.

Throw in a fennel bulb or two with your next roast and you won’t be disappointed. While you could also add fennel bulb to a puree, it won’t be as smooth and creamy as the celery root, so it’s recommended that you pair it with a starchier vegetable like a potato.

Fennel is one of the lower-calorie swaps on this list, clocking in at only 27 calories for a single serving. It is also a good source of potassium and vitamin C.

Can You Use Celery Stalks Instead Of Celery Root?

Celery stalks, or celery ribs, make a perfectly fine substitute for celery root, depending on the recipe.

They carry the same flavor, though the stalk is more watery and therefore has a less intense flavor.

Can You Substitute Parsnip For Celery Root?

Parsnip and celery root come from the same family, and parsnip works great as a substitution. Nearly anything you can think to do with a celery root, a parsnip does just as well.

What Is The Flavor Of Celery Root?

Celery root has a fascinating and distinct flavor. Both earthy and sweet, it brings to mind notes of celery, parsley, and even potato.

Fresh and sweet like a carrot, but starchy and heavy like a potato, the often ignored celery root is a surprisingly versatile vegetable that can be sliced, diced, eaten raw, boiled, pureed, and thrown in soups.

Are There Other Names For Celery Root?

Celery root is also known as celeriac, it is simply another name for the same vegetable.

Are Celery Stalks And Celery Root The Same?

In short? It’s complicated. Celery stalks and celery root are essentially the same plant, but you will not find them on the same plant.

Celery stalks are cultivated and grown for their stalks, while celery root is cultivated for its starchy roots.

In other words, don’t assume that the celery stalks you buy at the grocery store were once attached to the big bulbous celery root.

Are Celery Root And Fennel The Same?

Though celery root and fennel are both delicious root vegetables, they are not the same.

They are both sweet, crisp vegetables with long stalks on top, but the similarities end there.

Fennel has many layers like an onion and has a distinctive anise flavor. Celery root tastes like celery and is much starchier than fennel bulbs.

Celery root is not a commonly used ingredient in American cooking, which can make it hard to find at the grocery store.

Fortunately, there are number of amazing root vegetable swaps that will give you a very close flavor, texture, and mouthfeel to celery root.

A stalk or two of celery can give you the added flavor boost you may be looking for as well.

Whatever you choose, have fun trying out different swaps, and use it as an opportunity to hone your palate and sense of taste! Happy cooking!