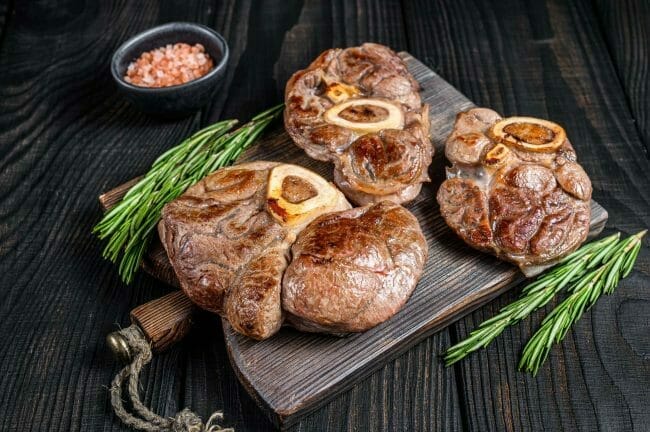 I don’t know about you, but beef shank isn’t a cut of meat I see too commonly in grocery stores. But it is wonderful in slow-cooking soups and stews.

Being a Dietitian Nutritionist, I know that meat tends to run higher in saturated fat and calories; which is not so great for our hearts and well-being.

So what is a nutritionist to do when looking for a more accessible ingredient and to cut down on saturated fat, but also want to make a deliciously appetizing and hearty soup that calls for beef shank?

Well, she researches beef shank substitutes! And if you’re looking to do that too – you’ve come to the right place!

In this article, we will discuss 10 different beef shank substitutes that will provide a similar taste and texture as beef shank.

All of the vegan and vegetarian options discussed are leaner than beef shank, but don’t worry – I’ve included some more hearty substitutions for meat lovers who don’t mind the nutritional similarity but don’t have beef shank on hand. Because culinary greatness should never be limited! Now let’s get exploring!

Chuck roast is cut from the shoulder and neck region of the animal. Other names for chuck roast may be shoulder steak, boneless chuck roast, or chuck shoulder pot roast.

Compared to beef shank, chuck roast has a similar texture. It may be ideal for those looking to steer away from the chewiness of beef shank.

Nutritionally, chuck roast contains about 250 calories per three ounces, 16 grams of fat, and 6 grams of saturated fat; as per the USDA.

In comparison, 3 oz of beef shank contains just 171 calories, 5 grams of fat, and about 2 grams of saturated fat.

The higher fat content of the chuck roast will provide a richer taste compared to the beef shank.

Of course, as the name suggests, these cuts of meat come from the arm. That makes them similar in texture as both the chuck roast and our star of the article- the beef shank.

This texture will be tough and also require slow cooking/moist cooking. Beef arm contains a much more similar nutrition content to the beef shank compared to the chuck roast.

If money is not too much of an issue for you, consider replacing the beef shank in your recipe with oxtail. Oxtail is located from the tail of the animal and contains a very rich tasting flavor.

High in fat, but also high in cash, oxtail just might be your go-to beef shank replacement (it tastes that good!).

Of course, being a more fatty cut of meat, oxtail has a slightly higher calorie and fat content.

A 3.5 oz portion contains about 265 calories, 14 grams of fat, and 5.6 grams of saturated fat. But if enjoying on special occasions, totally go for it! Moderation (not deprivation) is the way to go.

The skirt steak cut of meat comes from right below the animal’s ribs. It is very fatty and has a ton of versatility. Not only can you slow cook it, but you can quickly cook it as well.

It is very important to exercise caution while preparing the skirt steak– not cutting it against the grain could result in a very tough piece of meat.

Short ribs come from the chuck and rib area of the animal. They are very fatty (and of course, delicious) and would make a great beef shank substitution that slow cooks rather nicely.

Short ribs will definitely provide a great richness to your dish.

Short ribs are more on the calorically dense/fatty side of cuts of meat. They compare more similarly in nutrition content to the oxtail rather than the beef shank.

Yes, it’s a thing! The revolution of vegetarian/vegan meat substitutes has really come a long way, especially in recent years.

Go to any major grocery store and you are more than likely to find more than a few delicious vegetarian/vegan meat substitutes.

Vegan beef shank is an alternative to meat that does not contain any animal products. It’s made from wheat protein, soy protein, and pea protein.

Tempeh is one of the more popular vegan meat substitutes. It can be great in place of beef shank. Tempeh is made of fermented soybeans.

It has an earthy flavor and the consistency can be compared ro food items such as cooked beans. Using tempeh will provide you with a less greasy/heavy dish while still satiating you!

Seitan is another very popular meat substitute that can make for a great substitute for beef shank. Although seitan is made with wheat, it has very few similarities to bread or flour.

It is made of wheat gluten, which has been cooked and mashed to make an elastic dough-like consistency.

It has a great savory taste similar to chicken or portabella mushrooms. You can find it in a variety of styles, such as ground, in slices, or in strips.

As a vegetarian meat substitute that is also a vegetable-mushrooms can provide you with a great array of nutrients that may be lacking in actual meat.

They can make for a great substitute for beef shank, especially when cooked in a rich and hearty sauce that can really bring out their juices and flavors.

The texture of mushrooms, especially when cooked, have a similar texture as ground or minced meat. And they’re extremely easy to find and rather inexpensive!

Black beans provide so many nutrients that meat does not; digestive aiding fiber is an especially important one. They are a great substitute for beef shank and can be prepared in many different ways.

They have a rich and meaty taste and are incredibly inexpensive and easy to find. So many pros with these!

Beef shank is not known for its tenderness, it is known for its tough and dry consistency. This is due to the location of the muscles, which are in the leg of the animal.

The animal is constantly using these particular muscles; so therefore the beef shank consists of a more tough, dense tissue compared to the animal’s muscles that are less used.

This makes beef shank perfect for recipes that require slow cooking and moist cooking methods; such as braising, stewing, and pot roasting. One particular dish popular for using beef shank is beef bourguignon.

This dish along with other beef dishes such as beef stews can make for great hearty meals to cozy up to on these cold winter nights.

But what to serve with them? Check out some of these side dishes, and you’ll be building the perfect meal in no time!

The beef shank and the beef shin are often used interchangeably for the same cut of meat.

They both come from the leg portion of the animal and have little fat and very dense connective tissue due to the work of the animal over its lifetime.

The beef shin is sometimes referred to as the foreshank and is best prepared when slow-cooked in moist heat. Here is a great recipe for beef shin stew.

There are lots of substitutions to use in place of beef shank! Whether you are a ravenous carnivore, vegetarian, vegan, flexitarian, or anything in between- there’s a substitution out there for you.

Experimentation in the kitchen is a beautiful thing. And who knows- you just might find a substitution for beef shank that you actually end up liking more than the actual beef shank!

So have an open mind, a creative vision, and happy exploring!