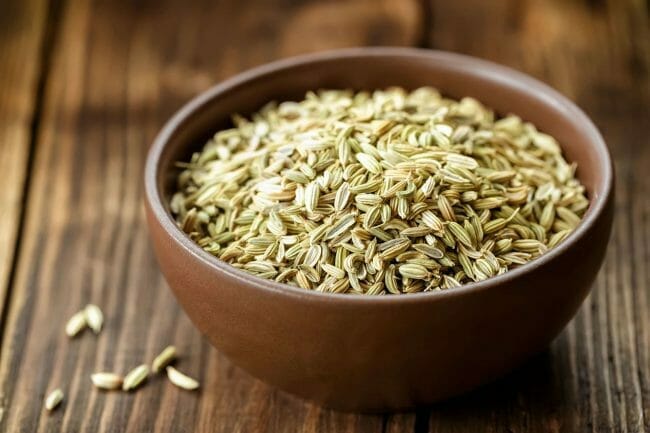 Traditionally, fennel and fennel seed have not been used in American cuisine. Native to the Mediterranean, it is a popular ingredient in Mediterranean, middle eastern, and Asian cuisine historically.

Yet as the world becomes more connected and cultural exchange becomes more common, people all around the world are becoming familiarized with all sorts of spices that they never would have used before.

Ground fennel and fennel seeds can be substituted with a wide variety of excellent swaps depending on the recipes you are using. Italian dishes can use celery seed or dill, while sausage can easily be made with cumin or caraway seeds, or even anise. Some less common swaps like licorice root powder, mahlab seed, or even anisette liqueur work great in sweets based recipes calling for fennel seeds.

Whether you prefer a dish without a licorice flavor or you just need an easy swap that is likely to be in the back of your cupboard, we have lots of options for you to choose from that will best fit the recipes you are making.

Celery seed is a quick and easy swap for fennel seed when you are in a pinch. This seed comes from the tops of the celery plant and has a similar earthy flavor to celery, while also offering some more distinct sweet and licorice notes in the seed form.

Celery seed is an excellent substitute for fennel seed in Italian dishes because celery is also frequently used in Italian cuisine, making it a familiar swap with a similar flavor profile.

To swap celery seed in place of fennel seed, simply exchange at a 1:1 ratio.

Celery seed (like fennel seed) tastes best when toasted in a little oil first, allowing the flavors to release more fully than if they were just steamed or dry toasted.

Dill is another great and easy swap that adds a wonderful brightness to your dishes with minimal effort or need to search for rare ingredients or substitutions.

When cooking with dill, you typically use the leafy tops which have an earthy and anise-like flavor, making it an ideal substitute for fennel seeds.

Coming from the top of cumin plant, cumin seeds offer a warm spice that is similar in size and shape to fennel seeds, making it a great swap or addition to Italian sausage.

Some people even confuse cumin seeds and fennel seeds when just looking at them. Cumin has a bit more bite to it than fennel seeds do.

The bite and warmth can add an excellent depth of flavor to a traditional Italian sausage.

Use cumin seeds in the same way you would fennel seeds in a sausage recipe, at a 1:1 ratio.

Anise seed is a great choice as a swap for fennel seeds. This is due mostly to the fact that fennel is said to have a flavor very similar to anise.

Anise seed is not traditionally used in an Italian sausage, but it can still add a wonderful texture and flavor for your sausage recipes.

When using anise seed, you will need to grind it in a spice grinder or mortar and pestle before adding to many of your dishes.

Anise seed is a very easy swap in Italian sausage though; it can be used as a whole seed and used in a 1:1 ratio as a substitute for fennel seeds.

Caraway seeds are another excellent substitute in sausage. Nutty with a bit of bite, citrus, and even a hint of anise, the flavor of caraway seeds is most well known from the flavor in Jewish rye bread, where it is commonly used.

Caraway is a warm and versatile spice that can easily substitute for fennel seeds in sausage at a 1:1 ratio.

Typically when you are making a dessert that calls for fennel seeds, the licorice flavor is the star of the show.

Licorice root powder can make an easy swap that keeps that sweet flavor without adding in any other different flavors.

Because licorice is a much more intense flavor than fennel seeds, use only half the amount of licorice powder as you would fennel seeds.

Mahlab seed is a great swap in sweets calling for fennel seed. The seed is both sweet and sour, adding a culinary delight to the flavor experience.

It is easy to find as a whole seed in Asian or middle eastern food markets. You will need to grind the seed yourself into a powder to season or flavor your dishes, but you won’t regret it for a moment!

The unique flavor profile of mahlab seed will have your guests coming back for more. You can use mahlab seed powder at the same rate you would use fennel seeds.

Look no further than anisette liqueur when searching for a boozy choice to give you that licorice laden bite.

Anisette liqueur is a French liqueur flavored with anise seeds, giving it a distinct flavor that mirrors the flavors of fennel seeds.

The nice thing about using anisette liqueur is that it allows you to skip the spice grinding if your recipe calls for that and allows you to instead instantly infuse the dish with licoricey goodness!

Anisette Liqueur will not be as potent as fennel seeds, so you will want to use two-three teaspoons of liqueur for every teaspoon of fennel seeds.

Be sure to adjust the liquid portion of your recipe accordingly especially if the recipe is very dry or calls for more than a tablespoon or two of fennel seeds.

The liqueur will also be a bit sweeter than the fennel seeds, so adjust your sugar levels accordingly.

What Is Fennel Seed?

Fennel seed comes from the top of the fennel plant. A member of the carrot family, fennel is a root that grows in a bulb shape with long stems that grow out of the top and feathery tops similar to a carrot.

When the plant is finished growing, it will flower and seeds will grow, which can be harvested and used in cooking.

Fennel seed has flavors of anise and licorice, much like the fennel bulb. It is often confused with anise in dishes because of its similar flavors. It is a very distinct flavor that can overpower a dish if not used carefully.

Fennel seeds are the whole seeds from the fennel plant, while ground fennel is those same seeds ground up into a powder.

Ground fennel can be used in any recipe that calls for fennel seeds, and vice versa. It makes for a quick and easy substitute that gives you the exact flavor profile you are looking for.

Fennel originates in the Mediterranean, and it has a long history of being used in Italian cuisine.

It is especially popular in Sicilian recipes which tend to rely on heavier flavors, sausages, cured meats, and tomato sauces.

Sicilian sausage is probably one of the most popular recipes to call for fennel seeds. It adds a distinctive flavor that makes it immediately identifiable as an Italian sausage.

While ground fennel will create the flavor you are seeking and is a great swap if you have it on hand, cumin or anise can also add a great flavor and add a bit more texture which is key to the traditional Italian sausage.

Though it might sound strange to westerners, fennel seeds are very popular as a flavor in desserts all around the world.

The following swaps work great to bring out the sweeter side of fennel seeds in your dessert recipes.

Are Fennel Seeds The Same As Cumin Seeds?

Though they look very similar and can be easy to confuse in the cupboard, fennel and cumin seeds are not the same.

Many recipes will use fennel and cumin seeds together though, because they offer a nice earthy flavor and are often included in curry powders together.

Fennel seed is sharper in flavor because of its licorice notes, while cumin is rounder and is more of a warm spice.

Is Fenugreek The Same As Fennel Seeds?

Fennel seeds look very similar to cumin seeds and have a licorice or anise flavor. Fenugreek seed is actually a legume, not a seed.

They are small and square, and they have flavors of maple syrup and celery.

Fenugreek is used in dishes across Asia, especially India, while fennel is more popular in the Mediterranean.

They are not interchangeable spices, as they offer very different flavor profiles to their dishes.

Fennel seed is a lovely versatile spice that can be used in dishes ranging from sicilian sausages all the way to middle eastern syrup-soaked sweets.

Whether you are looking for a quick fix in the back of your cupboard of stumble upon the perfect swap at your local market, we hope that you were able to learn a little more about how to cook with fennel seeds and its substitutes and get back to cooking your favorite dishes!