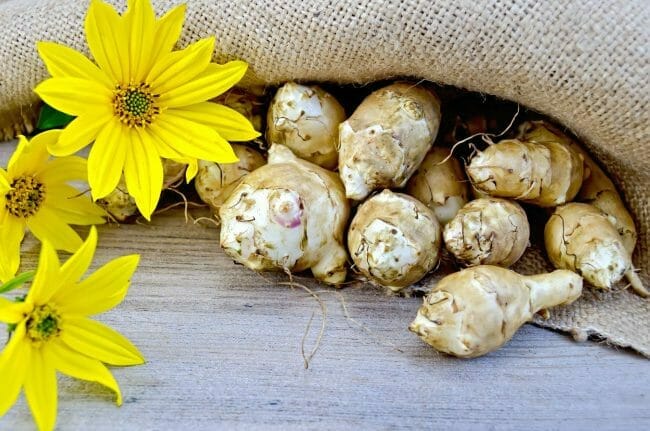 Jerusalem artichokes got their name because they taste very similar to real artichokes and can be used in similar ways in a variety of dishes. Despite being a vegetable native to the Americas, Jerusalem artichoke can be difficult to find in many grocery stores.

Whether you are looking for a gluten-free substitute, a vegan substitute, or just need an easy swap that you can find in any supermarket, we have you covered.

Jicama, artichoke hearts, or water chestnuts are the best all-around substitutes that will give you the most similar flavor and texture.

In this article, we’ll go over these substitutes and how to use them and also answer some burning questions you may have about the Jerusalem artichoke!

Jerusalem artichoke is an incredibly versatile vegetable. Their flavor has been described as a cross between a water chestnut and a globe artichoke. They look a bit like ginger root but taste nothing like it.

They can be eaten raw where they have a slight sweetness, a subtle nutty flavor, and a slight crunch to them. However, they are most delicious when roasted, allowing their sweetness to develop. They are also fantastically pickled, where their flavors can intensify, and the sweetness can develop even more.

You can use them in just about any recipe that you would use Jerusalem artichoke, whether it is a salad, a soup, roasting, a stir fry, or anything else. As each of these substitutes is plant-based, they are all gluten-free and vegan, fitting into nearly any diet!

This root vegetable is a great substitute for Jerusalem artichoke. Crunchy, starchy, and slightly sweet, jicama, also known as Mexican turnip or Mexican yam beans, cook up very similarly to Jerusalem artichoke. It has a sweet and sour flavor somewhat similar to a fresh apple.

Because of its freshness and crispness, it is a great addition in salads and slaws. However, you can also stir-fry it or roast it where it will get a little creamier and release more starches. Its mild flavor makes it a great base for a dish because it will easily soak up other flavors like marinades and dressings. 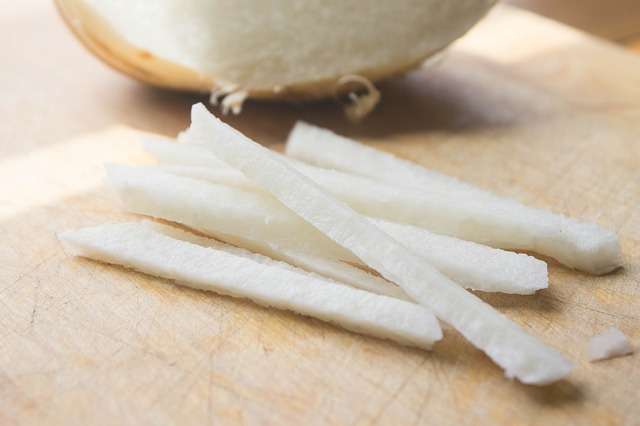 It works great in recipes that call for cooked or roasted Jerusalem artichoke. Be judicious if choosing to use artichoke hearts as a replacement for raw Jerusalem artichoke -if you are looking for the flavor to be similar it is a great choice. However, the texture will be a bit different.

If you’d like to read about possible substitutes for artichoke hearts, check out this article here. 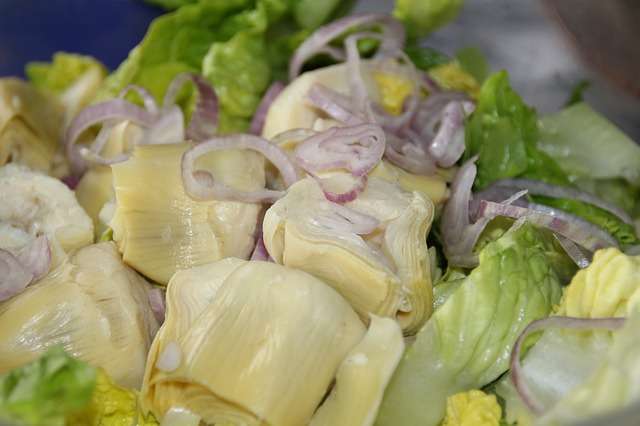 Water chestnuts are another great substitute for Jerusalem artichokes. They are another “misnamed” food because they are not a chestnut at all. They have a sweet and nutty flavor similar to real chestnuts but are actually a tuber.

Water chestnuts are slightly crunchy and sweet but become creamy and starchy like mashed potatoes when cooked, much like Jerusalem artichokes. This makes them a great all-around substitute. They are perfect in stir-fries, salads, or roasted.

Be careful about using it as a substitute where Jerusalem artichokes are the main ingredient though. Water chestnuts flavor is a little stronger than Jerusalem artichoke, which means it can easily overpower or change the flavor of a dish.

Parsnips look a bit like a white carrot. It is long and chunky and tapers at the end. Like a carrot (or the Jerusalem artichoke) they get sweeter when they are roasted.

They are a very popular addition to a traditional Sunday roast, and work great as a swap for Jerusalem artichokes. The sugars and starches in the parsnip will caramelize in the parsnip, making it sweet and creamy.

Parsnip is also a bit of a “superfood” -a single serving provides nearly 40% of your daily vitamin C needs, and it is also high in potassium and fiber.

Parsnip does have a distinctive flavor, so if you are looking for a substitute that will match the flavor, parsnip is not the best choice. However if your recipe calls for Jerusalem artichoke as one of several ingredients, parsnip is a great choice. 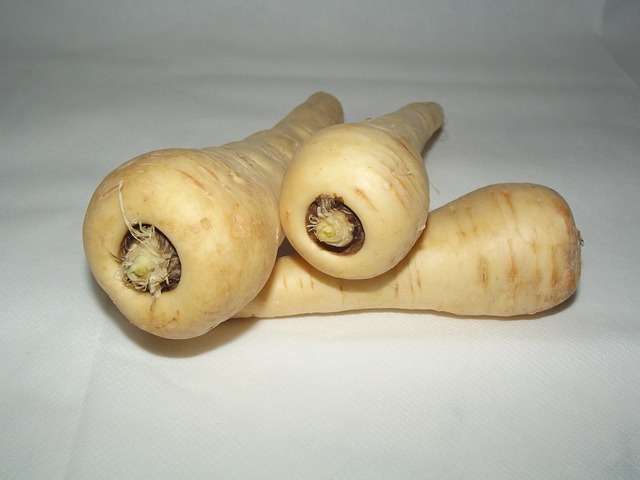 This is another unexpected one on the list. Brussels sprouts aren’t at all related to Jerusalem artichoke. They are in fact from the cabbage family -which makes sense given their miniature cabbage shape.

Brussels sprouts caramelize beautifully when roasted, giving a slightly sweet and nutty flavor. Their texture will stay a bit firmer than Jerusalem artichoke, so if you are looking for a perfect substitute in terms of texture it’s not the perfect choice. 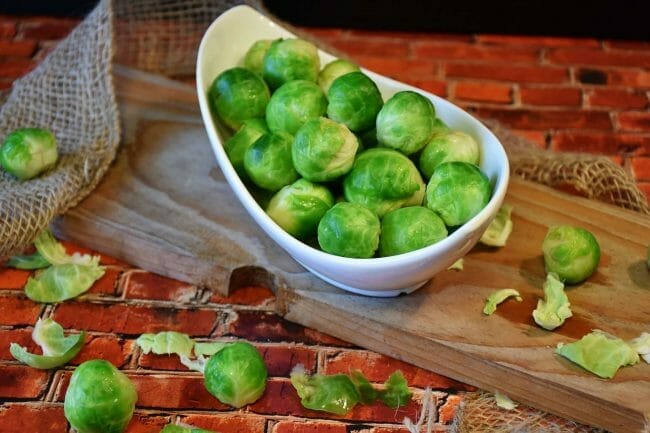 Best Substitute For Jerusalem Artichoke In Soups And Stews

Jerusalem artichoke tastes marvelous in a soup or stew. In fact, in 2002 it was named “the best soup vegetable” in Nice, France. It becomes soft and creamy when boiled, making a great filler vegetable as a base for a creamy soup, or added in chunks to a stew.

The swaps below are great healthy substitutes for Jerusalem artichoke -vegan, gluten-free, and high in many vitamins and minerals.

You may not have heard of salsify before. It’s a less commonly known root vegetable that looks a bit like a white yam. It has dark thick skin and a creamy white center.

Salsify, also known as oyster plant or Jerusalem star, has a slight oyster flavor and cooks up beautifully when boiled for a stew. Salsify is a particularly good substitute for Jerusalem artichoke in creamy soups where it is the base.

Besides being vegan and gluten-free, Salsify is also a superfood because it is high in calcium, vitamin C, iron, fiber, and Thiamin.

This is another substitute for Jerusalem artichoke that you may not have heard of before. Kohlrabi, also known as German turnip, is a very versatile vegetable that tastes similar to broccoli stems and cabbage.

This German turnip is excellent in stews cut into chunks, but it also blends beautifully to make a creamy soup base, making it an ideal substitute for Jerusalem artichoke.

Kohlrabi has a slight “spiciness” to its flavor, so choose your flavors carefully when pairing it together in a soup. It can easily overpower other flavors.

Chayote is another one on this list that is not as common. Shaped a bit like a pear or a gourd, chayote is actually technically a fruit! Chayote is a very neutral-tasting plant, though is a bit earthy.

The earthy and savory flavor lends itself well to spicy food, and it is a popular ingredient in Indian dishes and Cajun cuisine.

Jerusalem artichokes are very commonly served fried. They are sliced thinly and flavored with aromatics to add depth to the flavor and can serve almost as crisp or chip when fried up. The swaps that we offer below fry up beautifully and can make a great substitute for Jerusalem artichokes.

Sweet potato is one of the easiest swaps on the list. It’s available all year round, it’s sweet and delicious. They also fry up nicely and make for delicious chips or fries.

When the sweet potato is cooked it becomes even sweeter and the outside will become a dark golden brown from the caramelized sugar. They make a great side for fried fish or other meats, much like the fried Jerusalem artichoke.

Sweet potato also has excellent nutritional benefits, as it is high in fiber, vitamin B, potassium, and magnesium.

Cardone, also known as artichoke thistle, is a great substitute for fried Jerusalem artichoke. They are more bitter than Jerusalem artichoke but otherwise work great as a substitute. Cardone often needs to be soaked before cooking because it is so tough. However, once you soak them they should fry up perfectly.

Are Ginger And Jerusalem Artichoke The Same Thing? 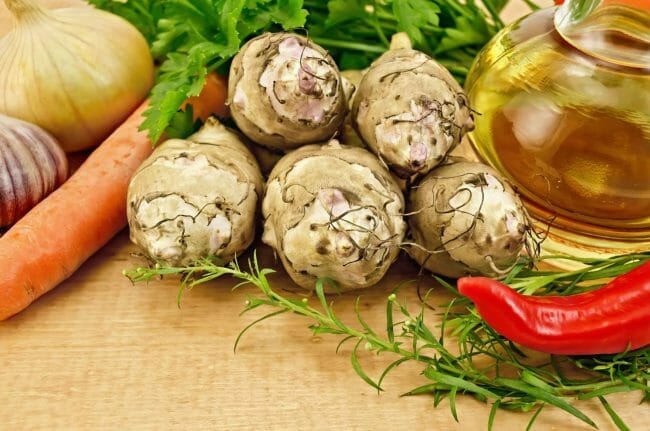 Can You Eat Jerusalem Artichoke Raw?

Jerusalem artichoke is safe to eat raw. It is popular in salads and other preparations but is most popular roasted.

How Do I Grow Jerusalem Artichoke?

They will sprout a big sunflower-like plant, and the root will be ready to harvest in the winter. They are very hardy and can even be left in the ground after a frost.

Jerusalem artichoke is a wonderfully useful vegetable that can be eaten raw, roasted, fried, mashed, and pureed. It is naturally gluten-free and vegan and fits into almost any diet. Hopefully, you were able to learn a bit more about Jerusalem artichoke today and the best substitutes for them when you need them!