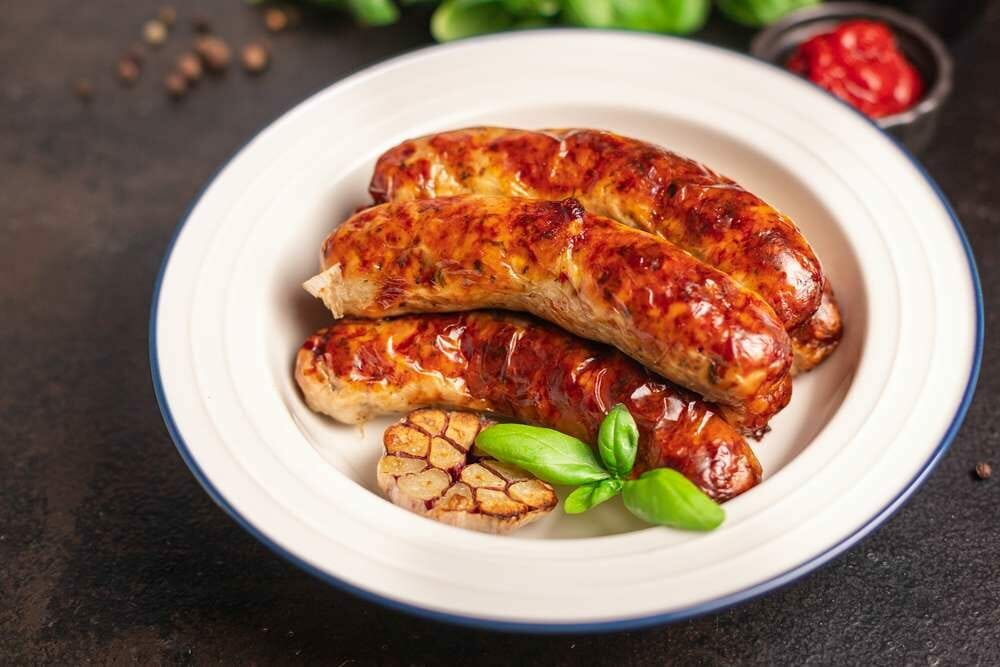 But it does have one caveat – it contains gluten. Therefore, seitan should obviously be avoided by those who are following a gluten-free diet. But don’t worry!

There are PLENTY of other tasty substitutes for seitan (many of which are gluten-free!) that can be just as nutritious and capable of making your recipe fantastic. In this article, we will discuss 11 of the best seitan substitutes.

The discussed seitan substitutes can be used interchangeably with seitan in various recipes. No conversions/measuring/guesswork necessary.

They all vary slightly from each other but resemble seitan either in taste, texture, or nutritional composition. All of the following seitan substitutes are naturally gluten free – as in, before being processed.

Tofu, arguably, reigns supreme over all other plant based meat substitutes. Admittedly, it’s my fave too.

Tofu, also known as bean curd, is made by coagulating soy milk, pressing the curds into solid blocks, and cooling it. Tofu is sold in many varieties. Some of the most common include:

A dense type of tofu that’s best suited for hearty dishes like stir-fries or chilis. This is what I usually stick with, simply out of familiarity and popularity.

The most versatile variety that can be used for grilling, broiling, or scrambles.

A great alternative to dairy and eggs that can be blended into smoothies or used in desserts. Lots of tofu lovers have emphasized to me that this is a MUST-TRY. But I haven’t gotten around to it yet 🙂

A convenient and ready-to-eat tofu that’s usually flavored and can easily be added to salads or sandwiches. So I actually didn’t really know this was a thing so now I must find some!

Tofu is incredibly versatile and surprisingly tasty – when cooked! Although I have tried it uncooked before (with a little extra virgin olive oil and sea salt) and I really liked it. But I like weird things so maybe don’t try this at home!

Many clients have expressed to me their concerns about tofu and soy consumption in relation to breast cancer and hormone issues.

This is because soy contains a type of plant estrogen – isoflavones known as phytoestrogen.

Tofu is naturally low in calories and sodium, and is cholesterol free. It is a good source of calcium, magnesium, and phosphorus.

Another very popular plant based meat substitute is Tempeh. Tempeh is a fermented soy product that is a good source of protein, iron, manganese, phosphorus, magnesium, and calcium.

It is also low in carbs and sodium. Uniquely, tempeh is also a great source of prebiotics (stemming from the fermentation process).

Tempeh has a dry and firm but chewy texture and a slightly nutty taste. It can be steamed, sautéed, or baked. Like seitan and tofu, it soaks up flavor very easily.

In addition to soybeans, other bean varieties may be used to make tempeh. It may also be made from wheat or a mixture of soybeans and wheat. This is a big reason why tempeh is not an ideal gluten free seitan substitute.

Plant-based chicken is a food product designed to imitate the texture and taste of meat.

Generally, plant-based chicken is created from ingredients like vegetable protein, soy, or wheat, and it’s shaped into patties, nuggets, or roasts.

Because of this potential addition of wheat, plant based chicken is not ideal for gluten free eaters.

Plant-based chicken also tends to have other ingredients such as oils, natural flavors, and seasonings, although that varies by brand.

2.5 ounces of Daring Original Plant Based Chicken Pieces contains 90 calories, 2 grams of fat, 5 grams of carbs, and 14 grams of protein.

Imitation meats such as meatless ‘meat’ crumbles can be a good source of fiber, folate, and iron. But they do tend to lack in zinc and vitamin B12.

They can also be relatively high in sodium. So use caution when purchasing them if you are watching your sodium intake and/or blood pressure.

½ cup of Beyond Meat Plant-Based Beefy Crumbles contains 90 calories, 3 grams of fat, 2 grams of carbs, and 14 grams of protein.

Like its other plant based meat alternative counterparts, plant based sausage has become more popular in recent years. They can be a great substitute for seitan, especially seitan strips.

Soya chunks are made from defatted soy flour, a by-product of extracting soybean oil. It has a protein content which is equal to that of meat. It is quick and also easy to cook.

You can prepare many dishes using soya chunks such as soya chunks curry, kurma and even add them to your pulaos, soups, stir fries, etc.

Like seitan, tempeh, and tofu, soya chunks easily take on the flavor of the other ingredients it’s being cooked with.

As mentioned before, all discussed seitan substitutes are great for vegans and vegetarians.

The following substitutes are ideal for those looking to avoid gluten because they run a significantly lower risk of gluten containment or cross contamination than the aforementioned substitutes.

It is both high fiber and high protein, and is a good source of iron, magnesium, and phosphorus.

TVP is also notably fat free, which a lot of plant based meat substitutes are not. Textured Vegetable Protein can be a great substitute for seitan, especially ground seitan.

Textured Vegetable Protein is made from defatted soy flour that has been cooked under pressure and then dried.

Many companies dedicate separate facilities for processing, handling, and packaging TVP to ensure that it remains gluten free.

Like seitan, textured vegetable protein takes on the flavors of whatever it is being cooked with. It has a very bland taste before it is cooked/prepared.

TVP can be used as an extender in meat or protein patties and meatloaf, stews and soups.

It also works great as a protein additive for various foods such as salads, chilis, oatmeal, cereals, baked potatoes, and stuffing.

Jackfruit is a unique tropical fruit native to South India that has gained popularity in recent years.

It tastes a bit more sweet than seitan, but can still make for a great seitan substitute. Jackfruit most resembles seitan in texture – which is comparable to shredded meat.

Jackfruit is the tree fruit in the world! It can reach up to 80 pounds in weight. WOW.
Jackfruit is extremely versatile and nutritious. It contains a good source of fiber, antioxidants, and various vitamins and minerals.

1 cup of raw sliced jackfruit contains about 155 calories, 1 gram of fat, and 40 grams of carbs. It also contains 3 grams of protein, which is notably lower than seitan and other seitan substitutes.

There are so many varieties of mushrooms. Thousands of them, actually! They come in varying textures, flavors, colors, shapes, and sizes.

Mushrooms make for a great vegan/vegetarian meat substitute because they have a very meaty taste and texture when cooked.

Mushrooms may not be for everyone, but if you cook them right – they can be SO satisfying! For tips on how to cook mushrooms to make them their *best selves* – click here.

Mushrooms pack such a nutritional punch. Of course, their nutritional profile varies, but in general – mushrooms are a great source of antioxidants, beta glucan (a form of soluble dietary fiber), copper, B vitamins, and potassium.

There are SO many ways you can cook and eat mushrooms! The opportunities are endless! I would even go so far as to say they are the most versatile seitan substitute on this list.

Check out these awesome recipes (44 of them!) for some great mushroom dishes.

Lentils are another great plant based protein substitute. They are edible seeds that come from the legume family.

Lentils come in many different varieties. Some of the most common lentil types include brown (most widely eaten type), puy, green (can be less expensive), yellow, red, and beluga.

They are relatively easy to prepare and are a great source of fiber, B vitamins, magnesium, zinc, and potassium. They are also made up of 25% protein.

Beans and other legumes can make for great seitan substitutes and sources of plant based protein. Not to mention, they are whole ingredients – a quality that this Registered Dietitian LOVES.

All beans and legumes vary widely in calories and macronutrients (fat, carbs, protein) but they are all generally a good source of fiber and various vitamins and minerals.

Seitan (pronounced “SAY-tan” – not Satan!) is very popular amongst vegetarians, vegans, and plant based foodies.

Perhaps you’ve heard of seitan referred to as ‘wheat gluten’ or ‘vital wheat gluten’. In fact, seitan is made from basically just gluten and water.

Gluten is responsible for the elasticity of dough made from grains such as wheat, barley, and rye. It helps hold the dough together.

Contrary to popular belief that gluten = carbohydrate, it is actually a protein. More specifically,  it is a mixture of the proteins prolamin and glutelin.

Seitan is an ideal vegetarian meat substitute for those who are allergic or intolerant to soy.

To make seitan, wheat flour and water are mixed and kneaded until a sticky dough develops into strands of gluten protein.

Then, the dough is rinsed to remove the starch, leaving only the mass of pure gluten protein.

Seitan is relatively easy to make at home. But you can also find it sold on its own in stores in the form of slices, strips, or ground up.

You can also find it as an ingredient in other vegan/plant based meat substitute products such as Tofurky deli slices, meatless frankfurters, fakin’ bacon, and others.

Seitan has a very ‘meaty’ texture and a mild savory taste – sort of comparable to plain chicken or mushrooms.

Its texture differs from tofu or tempeh in a way that is more similar to meat. Seitan has the wonderful ability to soak up marinades and seasonings – making it a favorite to use in tasty and flavorful meatless recipes.

Check out some simple and delicious seitan recipes here.

Here is another simple recipe for seitan:

Slice the seitan. After it’s been resting for 10 minutes, cut the strings off and take it out of the cheese cloth. Slice the seitan and serve as a luncheon meat, or add it to your favorite stir fry!

While your reasons for diving into seitan substitutes may vary, I applaud you for taking the time to explore different avenues culinarily and nutritionally.

I hope this article has provided you with some insight and education on seitan and other plant based meat alternatives, while maybe inspiring you to experiment a bit more in the kitchen! Happy cooking!