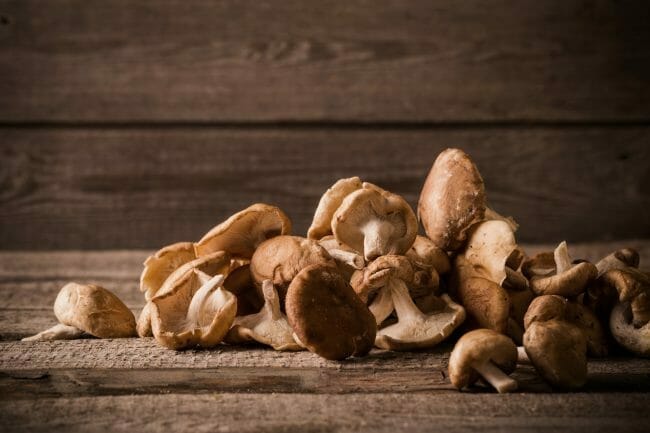 Have you ever tried to make an authentic stir-fry only to get to the grocery store and realize they don’t carry shiitake mushrooms?

As a mushroom that originated in east Asia, shiitake can be hard to locate in many American grocery stores.

Fortunately, there are many types of mushrooms that can easily replace shiitake mushrooms in a wide variety of recipes, including porcini, cremini, portobello, oyster, maitake, lobster, and enoki mushrooms. You can even use tempeh or zucchini in a pinch or if you are allergic to mushrooms.

Porcini is a mellow, round, cute little mushroom. It’s a very popular choice in a variety of European recipes. Its nutty flavor is similar to the shiitake mushroom, making it a great swap.

Porcini goes amazingly in a variety of pasta, soups, and pilaf-style recipes. Be sure to remove the tough stems when cooking with porcini mushrooms.

Dried shiitake mushrooms can work just as well as fresh ones, and make for a great substitute when you can’t get your hands on fresh shiitakes.

To use dried mushrooms, simply re-hydrate by soaking in hot water for about 20 minutes or until the mushroom is soft.

Once it is soft, you can slice it and use it the same way you would use any fresh shiitake mushroom.

Cremini mushrooms make a great swap for shiitake mushrooms, in part because you are almost certain to find them in your local supermarket.

It is a part of the Portobello family, and as such, they have similar properties of being firm to the touch with a smooth cap, and an earthy flavor.

Cremini is very easy to cook with, there is no need to remove the stems if you don’t want to, you can cook them whole or sliced up.

They make a great addition to soups, stews, sauces, pasta, salads, and more. Any recipe calling for shiitake will taste great with a cremini mushroom used in its place.

Portobello mushrooms are amazingly versatile mushrooms. This wide and thick mushroom cap is a popular vegetarian choice as a meat replacement in burgers.

Like the shiitake mushroom, it has an earthy flavor and firm texture, making it an ideal substitute if you are looking for the substantial mouthfeel that shiitake offers.

When substituting portobello for shiitakes, be sure to cut up the portobello to a similar size to the shiitake, for ease of cooking and handling.

Portobellos can be rather large, so unless you plan to cook it whole as a mushroom burger, some deft chopping will come in handy.

Once the mushroom is down to a reasonable size, treat it the same as you would the shiitake in your recipe.

Oyster mushrooms are a fantastic shiitake mushroom substitute. The oyster mushroom grows on trees and has large greyish caps that resemble scallops.

Remarkably, oyster mushrooms have a subtle seafood flavor, making them a great addition to seafood dishes or even as a seafood replacement.

To use oyster mushrooms as a shiitake mushroom substitute, cook in the same way you would the shiitake.

Sliced and well-seasoned, the mushroom tastes marvelous sauteed in a little oil, or even battered and deep-fried to make an “oyster” po’boy.

Just be sure you keep an eye on it on the stove, as oyster mushrooms do burn easily.

A fungus grows on the outside of a certain type of mushroom which resembles the outer shell of a lobster, hence the name.

Like the oyster mushroom, lobster mushrooms do carry a subtle seafood flavor, making them a great addition to seafood dishes or even as a meat replacement.

If you are going more adventurous and interested in trying it as a seafood substitute, you may get more flavor out of the mushroom through marinating it for a bit before cooking it.

It has been used in traditional Chinese medicine for centuries, but also cooks up beautifully and is perfectly safe to eat.

Maitake has an earthy and peppery flavor, making it a bit more distinct than some of the other choices on the list. To prepare maitake mushrooms, no need to slice them up.

Simply tear apart the mushroom into the sizes you’d like for a rustic look, and cook it up.

Or for a more uniform look, simple knife cuts will keep your maitake looking a little more neat and orderly.

Enoki mushrooms are probably the most unique-looking mushroom on the list. The mushroom is long and thin, almost resembling noodles. Also known as velvet shank, they are popular in Japanese cooking.

The enoki has a delicate flavor that is delicious raw, thrown into ramen, or sauteed with other veggies and served over rice.

Made from fermented soybeans, tempeh is a Javanese meat replacement that looks similar to tofu, but with a firmer texture and meatier flavor.

Tempeh is full of umami, the flavor profile in mushrooms that give them that savory and meaty taste.

The umami in tempeh makes it a great flavor substitute for mushrooms, and the firm texture means that it will hold up well in a number of recipes.

To use tempeh in place of mushrooms, you can easily cook it up by slicing or cubing it and sauteing it on the stove.

You can even shave slices of it raw over a salad for some added protein. However, it is important to make sure that your tempeh has been pasteurized if you eat it raw.

Unpasteurized tempeh can carry harmful microbiomes that can harm you if not cooked.

If the umami flavor of mushrooms is not your thing but you are still looking for that meaty texture to bulk up your dish, look no further than the humble zucchini.

Its neutral flavor makes it versatile, and you can use easily use it as a replacement for mushrooms if fungi are just not your jam! Zucchini is best served cooked.

To add it to salads or stir-fries, try sauteeing one-inch chunks of zucchini in olive oil with salt and pepper on high heat to get a nice sear and maintain some texture.

Cooked zucchini can be added to pasta dishes, salads, casseroles, stir-fries, and more.

Because of its high water content, we don’t generally recommend adding zucchini to soups, as they will disintegrate into the dish.

How Long Should I Cook Shiitake Mushrooms?

Shiitake mushrooms should be cooked on medium to medium-high heat for 10-12 minutes, or until they get a nice golden color on the outside and are visibly smaller.

Because they have a high water content, it’s important to give mushrooms enough time to release all the water from them.

If you don’t, they can become mushy and heavy, weighing down your dish instead of adding a delightful meaty flavor.

What Is The Difference Between Shiitake Mushrooms And Regular Mushrooms?

There are many varieties of mushrooms growing all over the world. Shiitake mushrooms originate in East Asia and are known for their earthy flavor and meaty texture.

Shiitake is a bit more toothsome than other common mushrooms, with a texture that is a bit chewy rather than the spongy texture found in most grocery store varieties such as a button or Bella mushrooms.

How Long Do Shiitake Mushrooms Keep?

Fresh shiitake mushrooms will keep for about two weeks in the fridge. Store them in a brown paper bag to allow them to adequately breathe. Dried shiitake will keep indefinitely in a cool dark pantry.

To use dried shiitake, rehydrate with hot water for about 20 minutes and then cook as directed. Once rehydrated, the mushrooms should be consumed immediately.

Shiitake is a hardy fungus with deep flavors that go well in many types of recipes. Whether you are looking to throw together a quick stir fry or an elaborate mushroom sauce, there are many wonderful mushroom varieties out there that can make for a great swap for the substantial shiitake mushroom.