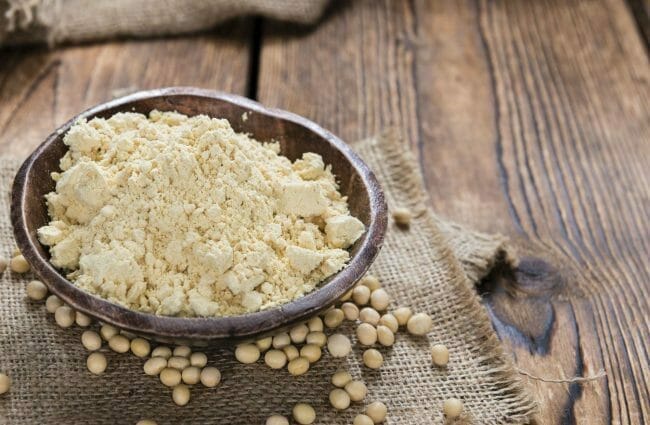 You may be aware that tofu and soy milk are made from soybeans, and you may have even tried edamame (the Japanese word for soybeans). But did you know that soybeans can be made into soy flour as well?

That’s right! Soy flour is a high-protein flour that is naturally gluten-free. It is a popular choice for people on a gluten-free diet, or those looking to get some extra protein into their diet.

Some people prefer to avoid soy flour due to its high estrogen levels, they may have allergies to soy and other legumes, or they just don’t like the flavor.

Whatever your reason for seeking out a soy flour substitute, We have some great options on our list here to give you ideas for your next cooking adventure.

Chickpea flour, legume flour, and rice flour are some of your best gluten-free substitutes. Quinoa flour is a great substitute if you are looking for a protein boost.

Water chestnut starch and wheat flour are ideal substitutes for frying or coating foods. And Coconut flour, almond flour, and lupin flour are perfect alternatives for when you are baking something sweet.

We’ll be going over in more detail in this article how to use these substitutes and answer some questions you may have about soy flour as well.

Chickpea flour, also known as gram flour, is a very popular flour in Indian cuisine, where it is commonly used to make fritters known as pakoras.

Chickpeas are related to soybeans, making them very similar in flavor, texture, and looks. If you need a pure 1:1 substitute, chickpea flour is a great choice.

Chickpea flour is very mild in aroma making it extremely versatile as well. It’s also high in protein and vitamins, making it a healthy choice too!

Be sure to mix chickpea flour with other flour when making bread, and don’t forget the xantham gum!

This is a very wide category that includes flours like lentil flour, but also any other bean flours you can find in the supermarket such as mung bean flour.

Since soy is a legume, other bean flours will work well as a substitute in terms of taste, texture, consistency, and how it cooks up.

Legume flours are naturally gluten-free and vegan and are also naturally high in protein.

You can use them in a 1:1 ratio when substituting them for soy flour without a problem in bread recipes.

Do not replace a bread recipe 100% with only legume flours, or the bread will be crumbly and dense.

If you use glutinous rice flour it will likely change the consistency of your dish, making it much bouncier and chewier (like mochi, a popular chewy Japanese dessert), so be careful which rice flour you choose.

Like the other flours listed, be sure to add xantham gum to help the dough bind and not fall apart.

Rice flour is also an ideal substitute if you have an allergy to legumes, because it will not cause an allergic reaction.

Quinoa flour might actually be a healthier choice than regular soy flour. It is much lower in saturated fat and sugar than soy flour.

It’s not as good of a source of protein as soy flour, but it still is a good source and is much lower calories than soy flour.

It is also a non-legume flour, meaning that it will not cause an allergic reaction in those with legume allergies.

When using quinoa flour as an alternative to soy flour, use caution because quinoa flour has a distinctive taste that can be overpowering. Taste as you go and adjust as needed.

Water chestnut starch is a popular thickening agent and is also used as a batter in many Chinese cooking recipes.

The very popular honey walnut shrimp recipe is traditionally made by coating shrimp in a water chestnut starch slurry and then deep frying.

Water chestnut starch produces a delicate and crispy coating when used to deep fry, and is an excellent gluten free and vegan substitute for soy flour.

If you are looking for some great substitutes for water chestnut starch, check out this article here.

Wheat flour is the only substitute on this list that is not gluten-free. If you do not need a gluten-free option then wheat flour can be a great substitute. It is low-cost and easy to access at any grocery store.

Wheat flour can also be used in baking if you do not need your recipe to be gluten-free.

Coconut flour is a wonderful substitute for soy flour in baking. It is naturally sweet, making it the perfect substitute in sweet baking recipes, but less ideal for savory recipes.

It will also absorb more water than soy flour, so adjust your recipe accordingly and pay attention to the consistency of your dish as you are baking.

If you are looking for a gluten-free alternative to soy flour, almond flour is a great choice.

Almond flour is high in protein and is slightly sweet tasting. It is also much higher in moisture content than soy flour, so be careful with your liquid amounts when using almond flour.

Almond flour can replace soy flour at a 1:2 ratio in baking. You may also need to add an extra egg to help bind the ingredients together, as almond flour is very crumbly.

Lupin flour works especially well in baking because it will help you produce light and fluffy pastries.

Lupin flour should not be used as the only flour in baking, because it will taste bitter if it is the only flour used. It should take up no more than 20% of the entire amount of flour in a baking recipe.

Be aware that since lupin flour is made from legumes, you should avoid it if you have nut allergies.

Despite its name, buckwheat flour is not made with wheat at all. It is a grain that is related to the rhubarb plant.

It is naturally gluten-free and is a non-legume flour, meaning it will not cause legume-related or gluten-related allergic reactions.

Buckwheat is a great choice in baking. It is high in fiber and protein and is a popular choice for breakfast foods such as pancakes and waffles.

Like many of the other flours on the list, buckwheat flour should not be the only flour used in a baking recipe, or the dish will be too tough and dense.

Be sure to include a mix of several flours and a good among of xantham gum as well to help bind everything together.

Is Chickpea Flour The Same As Soy Flour?

Chickpea flour and soy flour are very similar in texture and flavor, but they are not the same thing.

What Is The Difference Between Almond Flour And Soy Flour?

Almond flour and soy flour have similar textures and looks, but they are not the same product.

Can I Make Soy Meat From Soy Flour?

Soy meat cannot be made from soy flour. It can however be made from mature soybeans. It is made by first cooking the soybeans, then roasting them for an hour.

The beans are then mashed and mixed together with cooked aromatics and spices such as onion, garlic, salt, pepper, paprika, and more.

Finally, shape the mixture into patties and bake or fry until heated through and with a crispy exterior.

Why Is Soy Flour Used In Bread?

Soy flour is often used in commercial bread recipes (even gluten-filled bread) because of its high protein content and its ability to strengthen the bread dough.

It acts as a stabilizer to the bread by lowering oxidation, which increases its shelf life. It also increases water absorption, allowing for a softer final loaf.

Soy flour is an excellent gluten-free flour that can be used for a wide variety of recipes and dishes.

Whether you are looking to make gluten-free bread, deep fry some foods, or make any number of other recipes, hopefully, you have found some suggestions for some great gluten-free substitutes for soy flour.