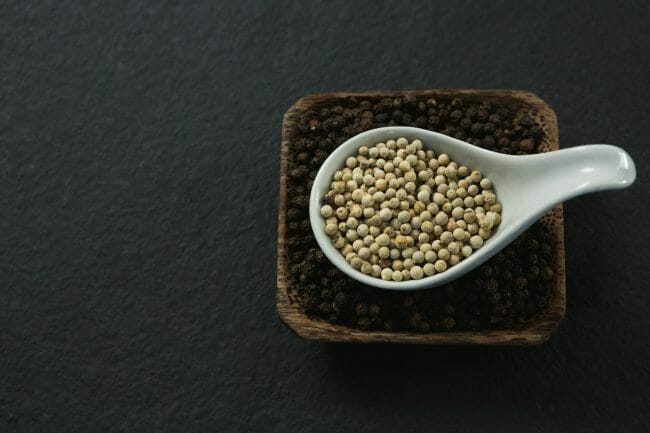 All kitchens have their staples, and black pepper is probably one of the things they always have. However, it is often necessary to find a substitute for white pepper or do without it altogether because it is not usually available.

Wait a minute. Is there a difference between white and black pepper?

Yes, there is a big difference, and not only in color. The flavor profile and smell of white pepper are quite different. White pepper substitute Reddit comments characterize the flavor differences in various ways, and some commenters are not huge fans of white pepper.

However, most agree there is a difference, although you could substitute white pepper for black and vice versa in small amounts at a pinch.

There are many substitutes for white pepper that you probably have handy in your kitchen. Not all of them will give you precisely the same experience as white pepper, but that is not necessarily a bad thing.

The substitute you choose will depend on what you hope to achieve with the dish.

If you are looking for a quick and dirty substitute for white pepper and you don’t mind the added color, the closest you can get to the flavor profile is turmeric and pink peppercorns. For light-colored sauces and soups, go for small amounts of ground ginger or cumin.

Both will impart a different taste (and smell) to your dish, so be sparing when putting it in.

If you need it for a meat marinade, definitely choose paprika and ground mustard. For roasts and garnishes, ground mustard is your friend.

Note: Cooks Illustrated does not recommend black pepper as a white pepper substitute when the recipe calls for a large (more than a pinch) amount of white pepper, such as in hot and sour soup.

How Is White Pepper Used?

In most cases, a recipe calls for white pepper when the dish calls for just a tiny hint of spice to light-colored dishes such as creamy soups and sauces and cheese fondue. Because it has a mild flavor, it will not overwhelm the other ingredients.

The color does not take away from the aesthetics of the dish. This is why the French frequently uses it in their cooking.

White pepper is frequently used at the back and front end of a dish. People use it in marinades for seafood, poultry, and other meats and as a garnish to add a bit of a kick. It’s used in many dishes, so why is it often necessary to find a substitute for white pepper?

The simple answer is that ground white pepper starts to lose its flavor and potency after two to three months. It does not go bad; it just doesn’t work the same way. That’s why it is not a good idea to buy a lot of it.

On the other hand, whole peppercorns can retain their flavor and spice for many years if you keep them in a cool place in an airtight container.  So, the best substitution for ground white pepper is whole white peppercorns and a grinder.

However, if you are bereft of white peppercorns, grinder, and white pepper powder right at this moment, then you are probably wondering what to use in place of white pepper. Hold off on reaching for the black pepper. There are other options with a similar flavor and spice profile as a white pepper seasoning substitute.

Before going into a deep dive into what can be substituted for white pepper, let’s find out a little bit more about white pepper.

Ground ginger is by far the most popular answer to what can I substitute for white pepper. Often used in Thai and Indian dishes, it looks very similar to white pepper and blends well with creamy sauces and soups.

You can use it in cooking or as a garnish, much like you would with white pepper, but be much more restrained as a little goes a long way with ground ginger. You can also use it in cakes and other baked goods, especially meat pies, for that subtle kick.

While ground ginger also has a subtle spice and kick, the flavor profile and smell are quite distinctive. If you are not sure you are okay with that, try putting a tiny bit of it in your dish and check if you like it. If you do, you can go ahead and use it. What is the substitution of 1 teaspoon white pepper? With ground ginger, it is about ¼ teaspoon.

Ground mustard is slightly closer to the flavor profile of white pepper than ground ginger. However, because it has a stronger color, it is a less popular substitute in light-colored dishes to which it adds a yellowish tinge.

The flavor of ground mustard is more complex than white pepper, but it is mildly spicy in small amounts. It works pretty well as a white pepper substitute in cheese and meat dishes. However, start by putting just a pinch in the dish and tasting it before adding any more. Mustard powder can be quite spicy in large amounts, so exercise restraint.

Turmeric is actually a type of ginger but much milder than white ginger, with which most people are familiar. Turmeric powder is often used in curries to give them that deep yellow color, so we are going around the color wheel for substitutes to white pepper.

The flavor profile and spiciness of turmeric powder are less than that of white pepper, so you can use quite a bit of it without overpowering the dish. It is the ideal substitute for white pepper barring the rather intense yellow color. However, a yellow color still looks better than black flakes. If your dish is dark, then there is no contest.

It is probably unlikely that you have pink peppercorns at hand, but in case you do, this is an excellent substitute for white pepper. Unlike white pepper, pink peppercorns come from the Peruvian pepper tree and not from a vine. However, it has a mild and gentle taste similar to white pepper, and while it has a rich, rose color, it adds a pleasing look to most dishes you put it in, especially as a garnish.

Additionally, pink peppercorn is too soft to grind in a pepper mill, so the ground version is often mixed with white and black peppercorns. To use pink peppercorns instead of white pepper powder, crush it lightly before sprinkling it in. You can also put it in whole to infuse the dish with the flavor and remove it afterward.

Paprika has a deep red color that you would not normally associate as a substitute for white pepper. However, because it comes from dried and ground red peppers, you get that subtly spicy undertone that you associate with a mild spice like white pepper.

Most households have paprika in the kitchen because it is a universal spice. Itv is particularly useful for marinating meat where its deep red color will go over better than in soups and sauces when used as a white pepper substitute.

Another unlikely candidate as a white pepper substitute is ground cumin, not because of its color, but because of its smell. Ground cumin has a rather distinctive smell typically associated with curries, kebabs, and other strongly seasoned meat dishes to give it that extra oomph.

However, the mild, spicy flavor of cumin is not unlike white pepper (in small amounts) and the color is neutral enough to be acceptable in most soups, sauces, and rice dishes that call for white pepper. Use just ½ teaspoon of cumin in lieu of one teaspoon of white pepper. Add more as desired.

Hollandaise sauce is a rich, notoriously finicky emulsion of raw egg yolk and butter that adds a kick to the otherwise bland poached egg. Together they make up the famous Eggs Benedict breakfast. What gives Hollandaise sauce its kick? White pepper, of course!

Add as much white pepper (or substitute) as you like to get the level of hotness you want on your poached egg, steaks, and veggies.

Mac and cheese is almost an American staple, but while it is rich and creamy, it is also on the bland side. Mac and cheese fans have figured out that the best way to give it more presence is to add two ingredients: white pepper and garlic powder!

What Is White Pepper?

White pepper, black pepper, and green pepper all originate from berries of the pepper vine (Piper nigrum). Green peppercorn involves removing the skin and drying the unripe berries. For black peppercorn and white peppercorn, the berries used are ripe.

How do you make white pepper? White pepper producers take an extra step in the drying process to give it its mild flavor and color. The ripe berries are first soaked in water for ten days to ferment. Soaking leaches out some of the piperine and oils that give black pepper a much stronger flavor.

What Is A Good Substitute For White Pepper?

Ground ginger and pink peppercorn are suitable substitutes if you want to keep the color neutral and still get that kick you expect from white pepper. Ground mustard and turmeric both have a yellowish tinge that might put you off, so use them only in dark-colored dishes, such as hot and sour soup.

Does White Pepper Have Health Benefits?

Because white pepper has a mild flavor and smell and is hardly noticeable, you can add a little to any dish, and your kids will not complain. Why would you want to do that? White pepper in small amounts has some amazing health benefits.

It would be better to keep white peppercorns at home and grind them when needed for maximum health benefits. You can get ground white pepper but be sure to check the color before buying it. White pepper powder should be off-white, not very white.

Very white ground pepper probably contains sulfur, which manufacturers use to make it look that way.

Many kitchens run out of white pepper powder just when needed so that these white pepper substitutes can come in handy. Hopefully, you will have one or more of these substitutes in your home. If not, you can always use black pepper and camouflage it with parsley or other garnishes if they are too noticeable