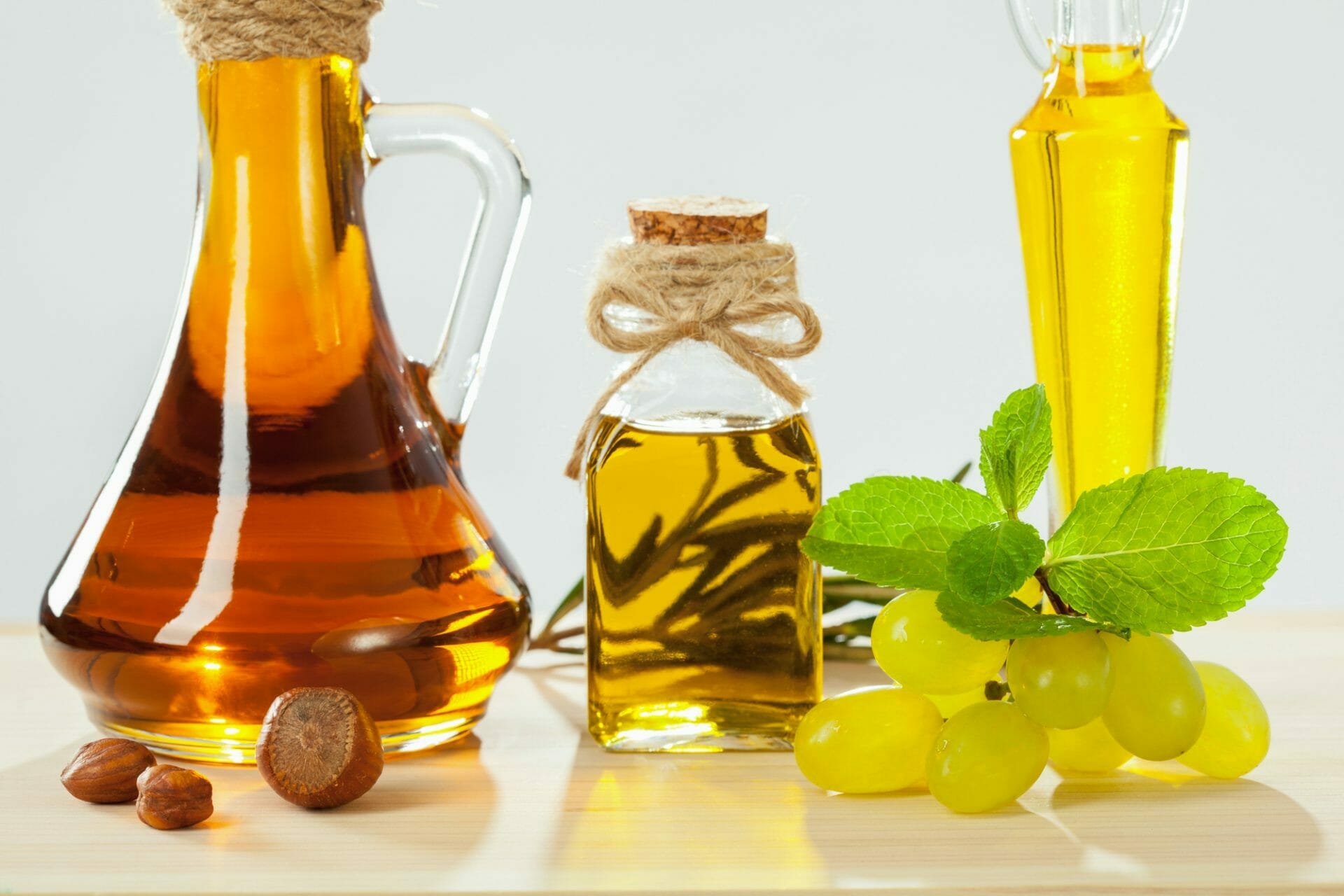 Grapeseed oil is one of the best all-around oils for cooking. It also has many other uses, including soapmaking, homemade cosmetics, and even homemade salad dressing or mayonnaise.

With a neutral, clean flavor, healthy flavonoids, loads of Vitamin E, and an affordable price point, it’s the go-to oil for many busy parents.

It’s got a great, high smoke point (204 degrees C). It’s also readily available at most supermarkets, alongside the more common (and recognized) olive and canola oils.

But suppose you find yourself on a Tuesday evening, staring down the barrel of weekday dinner prep—or staring at your dried-out face in the mirror.

Your trusty bottle of grapeseed oil is all but empty.

What’s a mom or dad to do? You’ve been buying grapeseed oil for so long that you’ve stopped buying anything else, and your pantry is empty.

So, what do you put on your supermarket list?

A couple good substitutes for use in homemade cosmetics are safflower oil and sweet almond oil. Some alternative oils for making homemade mayo include avocado oil and olive oil. And canola oil and butter are substitutes for grapeseed oil in cakes.

Peanut oil is widely used in a variety of different applications. Some restaurants use it to great success (I’m looking at you, Chick-Fil-A).

It contains high levels of Vitamin E as well, a vitamin known for being a powerful antioxidant. Peanut oil also has a high smoke point (232 degrees C), making it a great frying oil.

Corn oil is another substitute for grapeseed oil that won’t break your grocery budget. It’s also one of the healthier alternatives, considering its rich profile of mono- and poly-unsaturated fats.

You can buy it organic or non-GMO for an even greater health boost. Corn oil’s smoke point can run up to 238 degrees C, so it’s a great all-purpose oil for most types of cooking.

This oil is often used in Eastern and Middle Eastern cuisine. It’s made from sesame seeds and, like many other oils on this list, is a good source of Vitamin E and other antioxidants.

It also has a secret superpower—two unique compounds, sesaminol, and sesamol—which are antioxidants belonging solely to sesame, as their names suggest.

The smoke point of sesame oil is up to 232 degrees C for the semi-refined variety. Sesame oil subs in nicely for grapeseed oil for roasting meats or veggies.

While you may know avocado oil mostly for its skincare and anti-aging properties, it also makes a great culinary oil.

Its smoke point is around 271 degrees C, so it’s great for frying and grilling. It tends to imbue a rich, buttery flavor on the foods you cook with it.

However, it’s still a neutral flavor that won’t distract from the overall flavor profile of your foods, allowing them to really shine.

Olive oil is a well-known oil, and is readily available in most grocery stores. It’s an excellent alternative to grapeseed oil for pan-frying eggs or popping popcorn on the stovetop.

It tends to smoke a little easier than most oils. But it’s still safe to cook with past the smoke point, which is comparable to other oils at around 207 degrees C.

It also makes a delicious homemade mayo when combined with eggs and seasonings.

Canola oil is probably the most budget-friendly oil on the list, as it’s readily available in most supermarkets. You may already have some in a dark, forgotten corner of your pantry.

Canola oil is a great substitute for grapeseed oil in cakes and other baked goods. It has a neutral flavor and touts some great ratios of mono- and poly-unsaturated fats (the good kind).

230 degrees C is the smoke point for canola oil, which is right on par with other great all-purpose oils.

Unsalted butter is easy to find at any local grocery store and comes in a variety of grades. Choose Grade AA for the best quality and flavor.

Butter is a great substitute for grapeseed oil in cakes because it doesn’t impart a unique flavor, yet still adds a creamy richness to your baked goods.

It can be melted or softened prior to use, depending on your recipe. Just be careful not to brown it, as browned butter has a distinct flavor all its own.

Use it in your homemade soap when you want a harder bar with a healthy amount of lather and conditioning properties.

If you’ve got sensitive skin, look no further than apricot oil as a substitute for grapeseed oil in soapmaking.

It’s a hearty moisturizing oil that, like many other oils, is high in Vitamin E and fatty acids that are healthy for your skin.

The best part is, it won’t irritate your skin, as it’s super gentle and conditioning.

This oil is a bit more expensive than others on the list, but if you want to make baby care products, this might be your go-to substitute for grapeseed oil in soapmaking.

The great news is, you don’t need to add as much of this oil in your soaps as you might with other oils.

You can use safflower oil as a substitute for grapeseed oil in homemade cosmetics requiring carrier oils.

There are two different varieties to consider when it comes to safflower oil: the high-oleic type, and the high-linoleic type.

The high-oleic variety is great for high temp cooking (with a sky-high smoke point of 266 degrees C).

And the high-linoleic variety is what you want for adding conditioning properties to your homemade cosmetics.

Almond oil is great for homemade cosmetics due to its anti-inflammatory properties and high levels of Vitamin E.

It can be used as a skincare treatment to soften problem areas of skin for eczema and psoriasis.

It can also help treat sun-damaged skin. Use it alone as a moisturizer, or use it as a carrier oil for your favorite essential oils to combine the benefits of both.

Where Does Grapeseed Oil Come From?

Grapeseed oil is made from—you guessed it—grape seeds, most of them harvested from regions in the Mediterranean (where most winemaking takes place).

The grape seeds are usually leftover from the wine-making process. Once the fruit of the grapes has been processed out for the wine, the seeds are crushed, and the oils are mechanically extracted (using solvents) to make grapeseed oil.

The solvents used to extract the grapeseed oil may or may not have negative health effects.

Grapeseed oil is also produced using high levels of heat, which may destroy a lot of the nutrients the manufacturers claim their oil possesses.

In order to ensure you get the most nutrient bang for your buck, go with cold-pressed or expeller-pressed grapeseed oils for your home kitchen.

What Are The Health Benefits of Grapeseed Oil?

Grapeseed oil is known for its uses in skincare and beauty, but its health benefits apply both inside and outside of your body.

Due to high amounts of Vitamin E, it’s an effective anti-aging oil. Its antioxidants help your body to fight free radicals (a potential cause or activator of cancer cells).

It’s also a great source of unsaturated fats, which are the healthiest types of fats to include in your diet.

Another great benefit is that it’s a source of omega-6 fatty acids which are vital to a healthy brain.

Grapeseed oil is fairly budget-friendly, coming in at around $5 per 24 fluid ounces.

This is a bit more expensive than canola oil, which is priced at around $3 for the same size bottle.

But it’s right on par with—and maybe a bit cheaper than—olive oil, at around $6 for 24 ounces.

If you want to opt for the healthier varieties of grapeseed oil, like cold-pressed, prices get higher.

For a 16-ounce bottle of cold-pressed or “virgin” grapeseed oil, you’ll pay around $16, or a dollar per ounce.

What Other Products Contain Grapeseed Oil?

You can find grapeseed oil in skin serums, overnight face creams, and exfoliating scrubs, among other items.

This is because grapeseed oil has loads of antioxidants and is anti-microbial, meaning it can clean your face as well as moisturize (ahem, busy moms and dads!).

You can also find it as the main ingredient in some varieties of balsamic vinaigrette and other salad dressings.

In addition, grapeseed oil can be used alone as a treatment for some types of acne (with guidance from a doctor or dermatologist, of course).

How Do You Store Grapeseed Oil?

Grapeseed oil is a lot like other oils: it likes cool, dark places, away from sources of direct heat or light.

This is why some oils come packaged in darker-tinted bottles—it’s to protect the sensitive oil from losing its flavor or nutrients from light exposure.

You can refrigerate grapeseed oil, and it won’t cloud in the fridge like other oils.

It’s an after-product of winemaking and is a relatively recent product made possible only by our advanced industrial processes.

You’ll find plenty to love about grapeseed oil, from its high density of beneficial antioxidants to its high smoke point and neutral flavor profile.

There are several great alternatives to grapeseed oil that you can find at the supermarket (or in your own pantry), in the case that you find yourself out of grapeseed oil, or simply want to try a different oil that might be more affordable or accessible for you and your family.

Canola and olive oil are probably the two most recognizable alternatives and are readily available at most supermarkets.