Why Is Tuscan Milk So Expensive? [Plus 4 Alternatives] 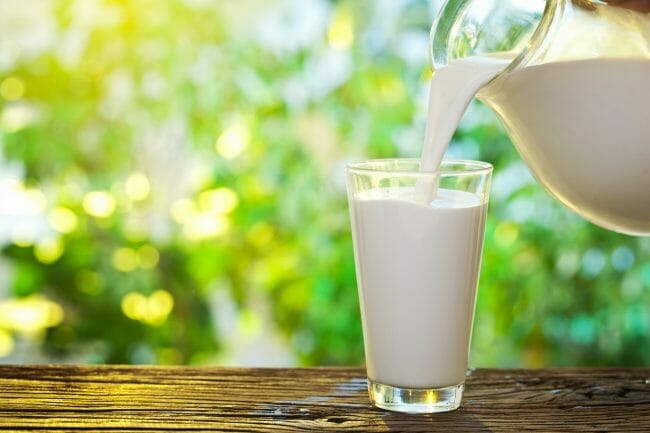 The other day I was browsing for deals on amazon when I came across an old posting for a gallon of Tuscan whole milk with over a thousand reviews.

People were claiming that Tuscan Milk changed their lives, was the best thing they ever tasted, cured their hangovers, and much, much more!

It looked as though one gallon of whole milk from this brand had once sold on Amazon for $50.

I was so confused.

Was this some sort of magical milk made from the personal cow of Jeff Bezos himself? How and why would Tuscan milk be so expensive?

If you’ve heard rumors about this high-priced milk and wondered the same thing then read on.

Tuscan milk is so expensive due to the superior quality of the milk and where this brand is produced and distributed. However, the truth is that Tuscan Milk is slightly above the national average price of a gallon of milk, and within the average price range for the region where it is sold.

While the amazon reviews are wild and entertaining, they are not true. Healthy Tuscan Milk has no magical properties, and it never sold for $50 a gallon.

This so-called “Magical” Tuscan milk is high quality and better tasting than some of the other, cheaper varieties sold in the same region.

A big part of the reason why the brand sells faster than cheaper alternatives is the taste. It might not give you magic powers but it is very good quality milk.

The farmers who produce it are more local than the alternatives, so the milk is fresher and of better quality.

The farmers have been in the dairy industry for many generations so they use best practices with the cows and production equipment.

Tuscan Dairy is committed to keeping their products fresh, which is why the milk is higher in price and is not sold to large store brand companies who would sell it over a larger region.

They make whole milk, 2 percent, 1 percent, and fat-free milk, all available in gallons, half gallons, and quarts.

They also make buttermilk, half & half, light cream, heavy whipping cream, and whipped cream in a can.

The buttermilk that they make is unique in that it is reduced-fat buttermilk. It contains 37% less fat than regular buttermilk but still has the same luscious taste.

Tuscan milk is definitely beloved by many in real life but the amazon reviews took things to another level.

So what is the story behind all those reviews? Read on for a little backstory and some info about the real Tuscan Dairy and where it stands today.

The Amazon reviews made Tuscan Milk something of an internet sensation ten years ago.

It seems that someone stumbled across an amazon ad selling milk and found it amusing. They wrote a silly review for fun, which prompted another person to do the same.

People continued to post reviews and comments in the thread until the milk garnered the attention of major media sources.

There was even an article about it in the New York Times! Amazon reportedly deleted all the reviews at one point but they were quickly replaced with thousands more. Tuscan milk has become an internet joke shared by many.

Some very unexpected things have gone viral on the internet, and Tuscan Milk is just one of them.

Are you wondering who Tuscan Dairy is for real, and how they feel about all this? If so, read on. This story gets even more strange.

Back when Tuscan Milk was an internet sensation it was still owned by Dean Foods. The company approved of the jokes.

It was mostly positive after all, and the attention didn’t hurt their sales. Dean Foods was a food and beverage company and the largest dairy subsidiary company in the US.

Dean Foods was headquartered in Texas but managed facilities all over the US and distributed products in all 50 states.

But apparently the Tuscan Milk publicity didn’t do enough to save them because Dean Foods made headlines again in 2019 when they filed for bankruptcy.

They claimed the reason for their downfall was the decline in the consumption of milk and dairy products in the US.

People tend to favor nut milk and other vegan products in today’s market. Walmart used to sell many Dean Food products and they have since broken their partnership.

Dairy Farmers of America is a dairy cooperative, owned by over 12,500 family farms collectively.

Where Does Tuscan Milk Come From?

Despite the name, Tuscan dairy does not come from Tuscany, though I’m sure many jokes were made about this on amazon.

Tuscan Dairy Farms have been located in New York for over one hundred years. They started out in 1918, selling milk door to door across Union and Essex counties.

Over time their business spread throughout the entire New York metropolitan area. They also sell milk through northern New Jersey and Long Island.

The farmers work very hard to maintain their family legacies. Many of them are second or third-generation farmers who are carrying on what their ancestors started in 1918.

Where To Buy It?

People who want to sample this famous beverage can find Tuscan milk at most major grocery retailers in the New York, New Jersey metro region.

It can be found in some areas of Long Island and upstate New York, but is not widely available outside of this area despite its Amazon fame.

Fresh Dairy products are generally supplied by farmers within the region where it is being sold.

This is part of the reason why milk in certain states is higher priced than in others. In Hawaii for example, where dairy farms are few and far between, a gallon of milk costs upwards of $8 per gallon.

But in Illinois, where you will find a dairy farm every 200 feet, milk costs can be as low as $2 per gallon.

The only milk that is (or should be) sold on amazon is shelf stable, meaning that it is processed and packaged in such a way that it doesn’t need to be refrigerated.

How the original Tuscan milk ad got on amazon is a bit of a mystery to me. Perhaps it was added as a joke, or maybe it was added and then flagged by amazon for removal.

Now and then I come across a perishable item that is listed on amazon as “currently unavailable.”

This is misleading since the items should never really be available on the website. The only place that these items can be purchased online is through grocery delivery services like Instacart or Imperfect Foods.

These services will purchase items from local grocery stores and deliver them to your door in packaging that can keep the items from going bad for the short term.

Right now one gallon of whole Tuscan milk is selling for $4.49 at Target, which is more than the national average of $3.71 per gallon.

Other brands that are sold in the same geographical region include Kemps, and Lehigh Valley.

Lehigh Valley is the same price as Tuscan milk at $4.49 per gallon of whole milk. Kemps milk is $3.79 per gallon.

Though Tuscan milk is more expensive than some other brands, especially store brands, it is better tasting and fresher.

Store brands are often a mixture of milk that was bought from many different farms all over a larger region. This is why they sell for less but don’t taste as good.

Is Tuscan Milk Worth The Money?

If you live in the New York metro region you can give this milk a try without breaking the bank but it will still cost you more than other brands of milk.

I recommend making a nice milkshake with it that you can enjoy while you read through the collection of funny and ridiculous reviews.

Who knows, maybe you’ll write one yourself about how Tuscan Milk saved you from a vicious grizzly bear.

Someone has to start the next whole milk sensation!