How Long Can Uncooked Bacon Sit Out? [by CDC & USDA) 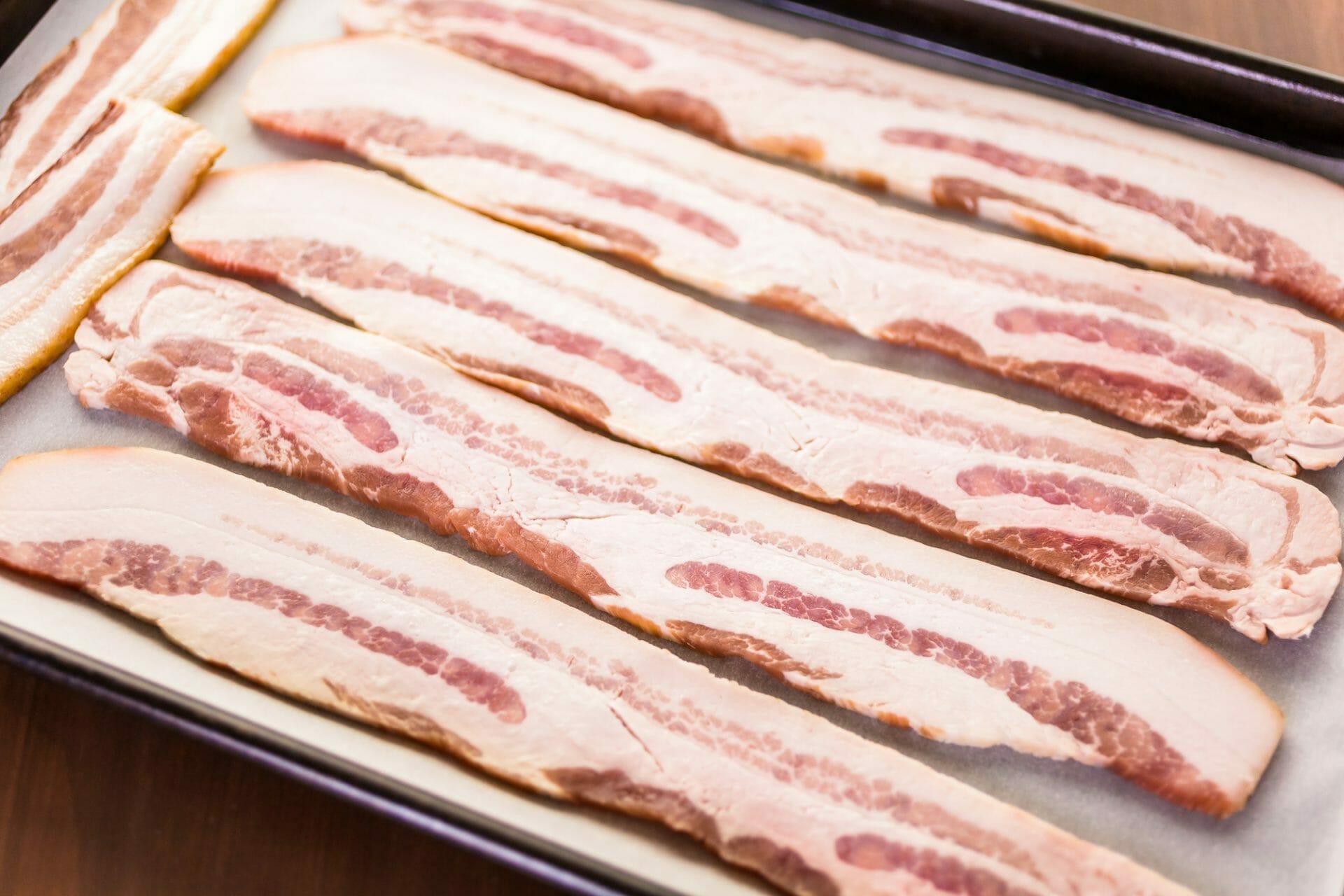 We’ve all guilty of it at one time or another. You’re busy cooking your family breakfast, you get distracted, and you forgot to put the unwrapped, uncooked bacon back in the fridge.

Nobody likes to waste food, so you may be asking how long uncooked bacon can sit out on the counter at room temperature before it goes bad?

Generally speaking, uncooked bacon should not sit out for more than 2 hours at room temperature. The reason is that bacteria such as Staphylococcus and Salmonella can multiply rapidly at room temperature and cause severe foodborne illness when consumed.

So if your raw bacon has been sitting out longer than 2 hours, as painful as it may be, it’s best to toss it in the trash.

Unfortunately, this is also true for raw turkey bacon and frozen raw bacon that has been sitting out as well.

Bacon is a favorite food item for the breakfast table or anytime. It can be enjoyed not only with eggs but also on sandwiches and crumbled into soups or salads.

The average American consumes approximately 18 pounds of bacon every year! What’s not to love?

The sizzle, the smell, and the taste of bacon are all wonderful to wake up to, but when that opened package gets left out on the counter, it may not be worth the risk for you and your family.

This article will take a deeper look at how long uncooked bacon can sit at room temperature, the dangers of foodborne illness, and how to store and cook bacon to prevent infection.

How Long Can Uncooked Bacon Sit Out At Room Temperature?

Bacteria can multiply rapidly between 40 degrees and 140 degrees Fahrenheit. The average room temperature is approximately 68 degrees.

Therefore, dangerous bacteria could be growing on your uncooked bacon when it’s left unattended on the counter.

For your safety and the safety of your family, it’s never advised to cook and consume your bacon after sitting out longer than 2 hours.

However, if you live in a warm or humid climate where the room temperature exceeds 75 degrees, you may have even less time.

If you suspect your bacon may have been compromised, you should consider throwing it away as soon as the one-hour mark.

What Are The Risks Of Foodborne Illnesses

The CDC has identified more than 250 foodborne illnesses caused by pathogenic bacteria. Staphylococcus, Salmonella, Bacillus, Clostridium, C. Perfringens, and E Coli are examples of bacteria that contaminate uncooked pork products such as bacon.

Symptoms of a foodborne illness include nausea, diarrhea, fever, headache, and stomach cramps. Some symptoms can be more or less severe, depending on the individual.

Older adults, young kids, pregnant women, and those with compromised immune systems are more likely to have a more severe reaction and may need to seek a doctor’s care.

Remember that foodborne germs can live on your countertops after you’ve tossed your bacon, so make sure to clean your counters thoroughly with a food-safe disinfecting spray such as Seventh Generation Disinfectant Spray.

How Can You Tell If Bacon Has Gone Bad?

Often, there isn’t a straightforward way to know if your food has been infected with food pathogens, so that’s why it’s always a good idea to throw out your uncooked bacon if it’s been sitting close to that two-hour mark.

Food spoilage bacteria is another kind of bacteria that can grow on food if left out for too long. However, the difference is that while spoilage bacteria can cause your food to taste and smell bad, it most likely won’t make you sick.

Regardless, you’ll want to avoid the unpleasant experience of trying spoiled bacon, so look for these signs:

If the bacon loses its pink color and instead starts to look gray, brown, or green, then it’s likely spoiled.

The fatty streaks in the uncooked bacon should be a creamy white color, so if you’re noticing that it is getting darker, then it’s time to toss your bacon.

If you notice an unpleasant, sour, or rotting odor coming from your uncooked bacon, you definitely shouldn’t eat it. The smell is a sign that bacteria have been allowed to grow, and your bacon could be unsafe to consume.

If the meat starts to feel slimy to the touch, it might be time to toss it. Lactic acid bacteria are responsible for the slimy texture and green hue that often comes with the spoilage of cured meats. Fresh meat should feel moist and soft but not slimy or sticky in any way.

How To Properly Store Uncooked Bacon?

Your uncooked, packaged bacon will usually always come with a best by date stamped on to the package.

Since the best by date is not the same as the “use by” date, it’s usually OK to consume the bacon after the date.

As a general rule of thumb, your uncooked bacon will still be OK to eat seven days after the sell-by date.

If you’ve already opened the package, you can store uncooked bacon in the fridge for one week and in the freezer for six months.

Follow these steps to ensure your open and uncooked bacon is stored fresh:

Wrap the opened bacon in paper towels before storing. The paper towels will absorb any excess moisture and keep the bacon fresh for a more extended period.

Place the uncooked bacon in a resealable plastic freezer bag and tightly seal. If you don’t have a freezer bag, then wrap tightly in plastic wrap or aluminum foil.

Check to make sure there aren’t any areas exposed to the air, and press down to eliminate any trapped air.

Place the wrapped bacon in the freezer or a meat drawer in your refrigerator. If storing in the fridge, make sure the temperature is below 40 degrees Fahrenheit and check your bacon often for signs of spoilage.

Even if your bacon doesn’t show signs of spoilage, storing it for too long in the freezer can compromise the quality and taste of your bacon, so even if it doesn’t make you sick, it’s best to consume the bacon before the recommended timeframe.

How Long Can Uncooked Turkey Bacon Sit Out?

So, you know now that regular bacon can sit out for two hours, but does it make a difference if it’s turkey bacon?

Unfortunately, the same rules apply to any raw meat, including any mass-produced bacon product, no matter what.

Therefore, if you accidentally leave your uncooked turkey bacon out on the counter, make sure to throw it away if it’s been out for two hours or longer.

How Long Can Frozen Uncooked Bacon Sit Out?

What if you previously froze your uncooked bacon? The USDA and CDC recommend defrosting your frozen raw bacon in the refrigerator, in a cold water bath, or the microwave.

However, if you accidentally leave your frozen bacon on the countertop, make sure that you put it back into the refrigerator or cook it before the two-hour mark as well.

Frozen uncooked bacon poses the same risk of developing dangerous bacteria as uncooked, unfrozen bacon, so err on the side of caution.

If your bacon has been sitting out for a short time and is still frozen, it should be safe to pop it back in the freezer or set it in the refrigerator to defrost thoroughly. However, never attempt to refreeze bacon that has completely thawed.

What Temperature Should I Cook My Bacon?

Bacon should always be cooked to a minimum of 145 degrees Fahrenheit. The best way to check the temperature of most meats is with a meat thermometer.

However, unless you’re cooking thick-cut bacon, it may be challenging to get an accurate read on the temperature with a meat thermometer due to the thinness of most strips.

Therefore, the best way to assess whether your bacon is cooked enough is by texture and appearance.

You can consider your bacon fully cooked when its color turns pink to brown and the fat renders off. You will see some shrinkage as well.

Everyone has different levels of crispiness that they enjoy for their bacon, but as a general rule, make sure your bacon is cooked through enough so that the edges don’t flop when lifted from the pan.

The Best Ways To Cook Bacon

There are several ways to cook bacon, and it all comes down to personal preference. However, no matter how you do it, you must cook your bacon thoroughly, whether it’s been sitting out or not.

If you choose to cook your bacon in the oven, the best way to ensure that you’re getting the right amount of crispiness and killing off any bacteria is to cook at 400 degrees for 18-20 minutes.

If you prefer to cook your bacon on the stovetop, start by putting the bacon down on a cold pan and turn the burners to low heat. Slowly cook your bacon until your desired level of crispness.

The microwave is a good, time-friendly way to cook your bacon if you’re short on time. Place the bacon strips on three layers of paper towels on a plate and microwave for 3-6 minutes, checking the bacon as you go.

The grill is a delicious way to cook your bacon for BBQ connoisseurs. Set your grill to 400 degrees. If you have a gas grill, set it to medium-high. If you use charcoal, build a medium-hot fire.

Place bacon in a cast-iron skillet and cook over the flames until your desired doneness.

Nobody likes to waste food, but it’s never a good idea to risk your or your family’s health when it comes to food safety.

So when you’re questioning uncooked bacon that has been sitting at room temperature for a while, the best advice is “when in doubt, toss it out.”

Your family’s health is of utmost importance. For more information on food safety, make sure to check out our other article