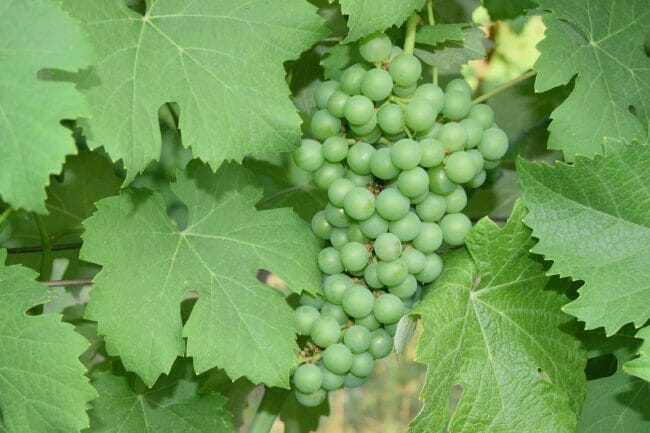 I was preparing some roasted pork chops the other day when I had to all of a sudden stop cooking. There was an ingredient in my recipe that I had never heard of- verjuice. As a professional chef and avid home cook, it is quite rare that I meet an ingredient I don’t know so I was honestly a little excited.

What is verjuice? How do I use it? How will it make my pork taste better? All of these questions were running through my head while my pork was still sitting in the pan waiting.

This sour juice is a great ingredient to make a marinate bright and zesty. Lemon juice is a little more tangy and fruity than verjuice. However, the acid in the lemon will get the job done, tenderizing your meat perfectly!

If your marinade recipe asks for 1 tablespoon of verjuice, use half a tablespoon of lemon juice in its place. Lemon juice is a little stronger than verjuice so you do not need quite as much.

You may also want to add ½ teaspoon of sugar for every teaspoon of lemon juice. This will help make the lemon juice a little sweeter and more comparable to verjuice.

It is a Japanese rice wine. Mirin and verjuice have similar sweet flavors. They are also both a little bit tangy.

Mirin is not as sour as verjuice so you may need to add a little lemon juice along with the mirin to replace verjuice in a marinade. If a recipe asks for one tablespoon of verjuice, use two teaspoons of mirin and one teaspoon of lemon juice in its place. This will give your marinade the perfect sweet and sour flavor you are looking for!

White vinegar is a super common ingredient. You may have a bottle on hand right now! This is one reason why it is a great substitute for verjuice.

White vinegar is much stronger than verjuice so you will want to use half the quantity of vinegar when replacing verjuice. A teaspoon of sugar for every tablespoon of white vinegar in your recipe will also work well to add sweetness.

Apple cider vinegar has long been renowned for its health benefits. Many people drink apple cider daily to help boost immunity and improve gut health. It also has a sweet tanginess that is very comparable to verjuice.

Vermouth is a classic cocktail ingredient. It is actually a red or white wine flavored with herbs. Both verjuice and vermouth are made from grapes which gives them a similar taste.

Vermouth does have a more herbal flavor than verjuice. However, this can be great in a cocktail! Replace verjuice with the same quantity of vermouth. For every tablespoon of vermouth, add a teaspoon of lemon juice to get the same acidity as verjuice.

Brandy is a sweet cordial that can be used to replace verjuice in cocktails. Adding brandy to your drink will add more alcohol and a little more sweetness than using verjuice.

Use a tablespoon of brandy to replace every tablespoon of verjuice. A splash of lemon juice may help give the drink the sour flavor that will be lacking when using brandy.

If you can’t find verjuice in your local grocery store, try making homemade verjuice. This is an especially tempting culinary project if you have access to grapevines or unripened grapes. Take a look at the section below which will tell you all about how to make homemade verjuice.

A splash of sangiovese with can be a great verjuice substitute. Sangiovese grapes are often used to make verjuice so it has a very comparable flavor. Of course, the wine is not as acidic as verjuice but it will give your drink a tasty flavor.

Replace verjuice with the same quantity of sangiovese wine. A sangiovese verjuice substitute may be just what you need to perfect your drink!

White wine is often added to soup to enhance the flavor. Choose a bottle of white wine that is more astringent and has a lower sweetness. Pinot grigio is a good substitute for verjuice in soup recipes.

If your soup recipe asks for a tablespoon of verjuice, use double the amount of white wine. White wine is not quite as strong as verjuice so you will need a little extra.

Citric acid is a potent powder that is purely acidic and sour. A little bit of the powder will brighten the flavor of your soup instantly. It is a very strong replacement for verjuice but it will get the job done!

If your recipe asks for a tablespoon of verjuice, replace it with ¼ teaspoon of citric acid. You only need a pinch of this powder to make your soup come alive!

How To Make Homemade Verjuice

If you are a true verjuice lover, you should definitely try making and bottling your own juice. Making verjuice is not too difficult, it just requires you to find some unripe grapes! Here is how it’s done.

Homemade verjuice will work wonderfully in your soups, cocktails and marinades. I recommend making it anytime you come across some unripened grapes!

Verjuice is unfermented juice from unripe grapes or crab apples. It is very sour and tangy. You can compare the taste of verjuice to apple cider vinegar. It is sweeter than harsh white vinegar but just as sour.

The name verjuice translates to mean “green juice”. This name refers to the green, unripened grapes that are used to make verjuice. You may also see the ingredient called “verjus”. Verjus and verjuice are the same!

Verjuice can be found in specialty grocery stores. It is usually in the same aisle as vinegar and comes in small bottles. You can always order verjuice online as it can be hard to find. Order a bottle to be delivered to your door and it should last you quite a while!

Once you open your bottle of verjuice, be sure to keep it in the fridge. Storing it in a cool place will help it stay fresh for about a year.

How To Use Verjuice

Verjuice is an acid. It can be used in almost any recipe that needs a little acidity to brighten the dish. You can use verjuice the same way you would use lemon juice or vinegar. Just a splash will do!

Very juice is most commonly used in marinades, salad dressing, and soups. You can find some desserts that are made with verjuice, too. It can also be added to cocktails! It definitely adds a sweet, tangy flavor to anything it is cooked with!

Verjuice is not alcoholic. To make verjuice, small, unripened grapes are picked and then crushed and squeezed. Not much juice comes out of the baby grapes which is why a little bottle of verjuice can be expensive. You need a lot of little grapes to get all that juice!

The juice is immediately bottled and sealed. There is no fermentation process involved that would make the juice contain alcohol.

Still have a few questions about substitutes for verjuice. Hopefully these straightforward questions and answers will help you!

Substitute For Verjuice In Recipes?

What Can I Use Instead Of Verjuice?

Replace verjuice with lemon juice, apple cider vinegar, white vinegar or a splash of brandy. Take a look at all of the substitutes we have listed above for more detail!

Verjuice is an unfermented juice made from unripened grapes or crab apples. It is sour, acidic and a little bit sweet.

Can You Use Balsamic Vinegar Instead Of Verjuice?

Hopefully you have found the perfect verjuice substitute for your recipe. I replaced verjuice with a splash of white wine vinegar to finish my pork chop recipe the other day and it worked wonderfully. I am now on the hunt for a bottle of verjuice to keep in my pantry for next time! But for now, these verjuice substitutes will work perfectly! I hope they help you too.