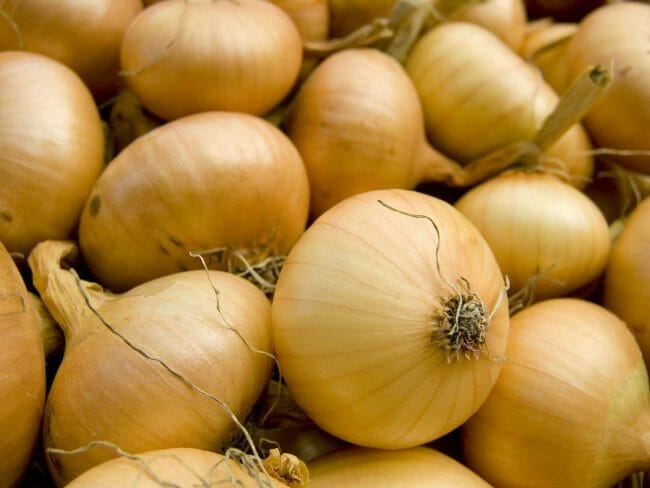 Vidalia onions’ mild flavor and significant health benefits make them a popular ingredient in many dishes.

A vegetable native to the state of Georgia, they became famous for their sweet flavor, which enhances the taste of any recipe.

Considered the sweetest onion, they get this reputation from the low-sulfur soil in which they grow since it’s sulfur that gives onions their sting.

It’s no wonder many cooks want to try a Vidalia onion in their next dish, hoping to impress the family or guests. But, sometimes, even expert cooks need to substitute the popular onion.

Whether the store didn’t have any, or there’s no time to run out for some, the biggest question becomes what’s the best substitute.

The most popular choices for cooking are white onions, shallots, chives, spring onions, brown onions, and garlic. Also, there are some onions that would specifically work from the sweet onion group, since the Vidalia onion is one, such as walla walla, yellow onions, and red or purple onions.

Specifically, for the process of pickling, potato onions are a great substitute when there’s a lack of Vidalia onions.

The article below is a thorough dive into the Vidalia onion from the nutrition and benefits to the many substitutes.

A wonderful addition to any meal, even some experienced chefs may find themselves needing a substitute.

White onions are one of the most effective substitutions for Vidalia onions for many reasons. First, white onions provide similar characteristics with a sweet flavor and texture.

Though white onions are a little less intense than Vidalia onions, they give off a wonderful aroma to enhance any recipe.

White onions work best in recipes that call for raw Vidalia onions such as salads or salsas, though they too can be sauteed.

Their sweet flavor pairs well with many different foods, and it’s likely the average person won’t be able to tell the difference between the two onions.

As a rule of thumb, when substituting Vidalia onions with white onions, it’s best to use fewer white onions because of their enhanced aroma.

A familiar food to those who consider themselves foodies, shallots are smaller than onions with a slightly oval shape.

Though they may be small, they are mighty! Adding it to a meal won’t set off any aroma, but it sure packs a punch with intense flavors.

They are the perfect substitute for a similar flavor, but they don’t have the same texture. When cooked, Vidalia onions and shallots get a different texture, which might change the overall feel of the meal when served.

In addition, shallots become soft, the crunchiness of an onion disappearing entirely the instant they’re cooked.

Substituting shallots compromises the dish’s texture, but the flavor will stay the same. As you measure out the amount, start tasting the dish to ensure you don’t use too much or too little.

Considered a green vegetable, chives taste mildly like onions. Found in supermarkets or grown in the home, they are a commonly utilized vegetable in many dishes. Though they have long green stems, chives have a similar taste to Vidalia onions.

Since chives are milder than Vidalia onions, they still work as a substitute. Whether in a cooked or raw dish, they make a great addition.

The slight hint of the notes of garlic makes them more comparable to Vidalia onions, though more is needed in a recipe as a substitute. Taste as you go to get the right amount.

Considered youthful onions, they are pulled before the bulb has a chance to expand which means they are long and slim with green tops.

Spring onions work both raw and cooked; it’s even possible to eat the bulb with the green stalks. Milder than the Vidalia onion, spring onions are eaten fresh because of their sweet taste.

Since spring onions have a more grounded taste, only half the amount of a Vidalia onion is necessary for substitution.

When cooking with spring onions instead of Vidalia onions, it’s important to start with smaller amounts and work your way up, tasting the entire time.

Considered a dry onion with a solid flavor, they have more sulfur than white onions which makes them stronger.

They give quite the punch when substituted for Vidalia onions, but the change could still work in many cooked dishes. It’s best not to eat these onions raw, they work best when fried.

Two tablespoons of brown onions substitute for one stalk of Vidalia onions. The rule of thumb is to continue tasting during cooking so as not to overdo the flavor.

Found in many recipes that call for onions, garlic is a good last-resort substitute for Vidalia onions.

Garlic has many of the same characteristics as onions and is surprisingly part of the onion family.

The similarities are uncanny since they contain the same sweet yet lightly bitter and spicy flavors.

Garlic has a more intense profile, despite its similarity to onions, so it’s important not to focus on substituting the quantity.

The ratio of garlic will never match the ratio of onions‑there would be way too much flavor‑but rather hiding the fact that the Vidalia onions are missing from the recipe.

Substituting onions with garlic means tasting the dish as you cook. This makes them a better substitute for cooked meals rather than raw.

For example, they’re not great in salads, since no one wants to bite into one, but they’re great sauteed for a meal.

Another type of sweet onion, the Walla walla onion, is a wonderful substitute for Vidalia onions.

The sweetness of these onions comes from the sulfur the soil in which they grow contains, rather than the sugar amount of sugar in the onion.

Overall, walla walla onions create the same flavors as Vidalia onions with less spice and bitterness but the same amount of sweetness.

Great in raw and cooked meals, walla walla onions don’t lose their texture as they cook and are sweet enough to put into raw meals such as salads.

Uncooked, they appear similar to regular brown onions, which means their flavor is the only way to tell them apart.

Easily substituted on a one-to-one ratio, finding them is the only obstacle to using walla walla onions.

Unfortunately, there is a chance that local supermarkets don’t distinguish regular brown onions from walla walla onions, labeling them both the same.

Zesty and crunchy yellow onions are popular onions for many dishes. Although not necessarily labeled as the best substitute, they work when the cook is in a pinch.

In addition, onions such as the Vidalia onions, which are sweeter in flavor, have a higher water rate, releasing the dampness as the meal is prepared.

When using regular yellow onions, it’s important to remember to add moisture as necessary to make up for the deficiency.

There is also a significant size difference between the two onions. If you’re moving on to using a yellow onion, one bulb equals two Vidalia bulbs.

Since their taste is slightly different than Vidalia onions, it’s important to continue tasting during cooking.

Spicier than the Vidalia onion, red or purple onions are a common sight in most grocery stores.

Since the onion does hold a sweet flavor, even if it is spicier, it works very well in the place of Vidalia onions when a substitute is necessary.

Though the ratio is one-to-one for a proper substitution, it’s best to counter the spiciness of the onion. Soak the peeled onions in a bowl of water up to an hour before use.

This will help neutralize some of the spicier flavors that red or purple onions carry, leaving the sweet taste that Vidalia onions carry.

These medium-sized bulbs are known as underground or Egyptian onions. Sweet but mild, they aren’t as pungent as garlic making them more appealing.

Perfect for soups, salads, and different stews, they excel at making pickles. Unlike garlic, potato onions can be used as an uncooked substitute for Vidalia onions.

When it comes to ratios, they are a perfect one-to-one substitute for the Vidalia onion. There is no need for conversion since one bulb has the same amount of flavor‑no need for math!

Grown only in a restricted area by Altamaha River in the southwestern part of Georgia, Vidalia onions are produced with great care.

They need mild winters and shorter day-times, hence the reason they are produced only in a small region of the state.

The care required in growing them means they are available only around the middle of July throughout the United States.

Holding the title of the world’s sweetest onion, Vidalia onions enhance any dish.

Onions in general have many nutritional and health benefits with Vidalia onions being no excuse. Below is a list of the benefits of using Vidalia onions.