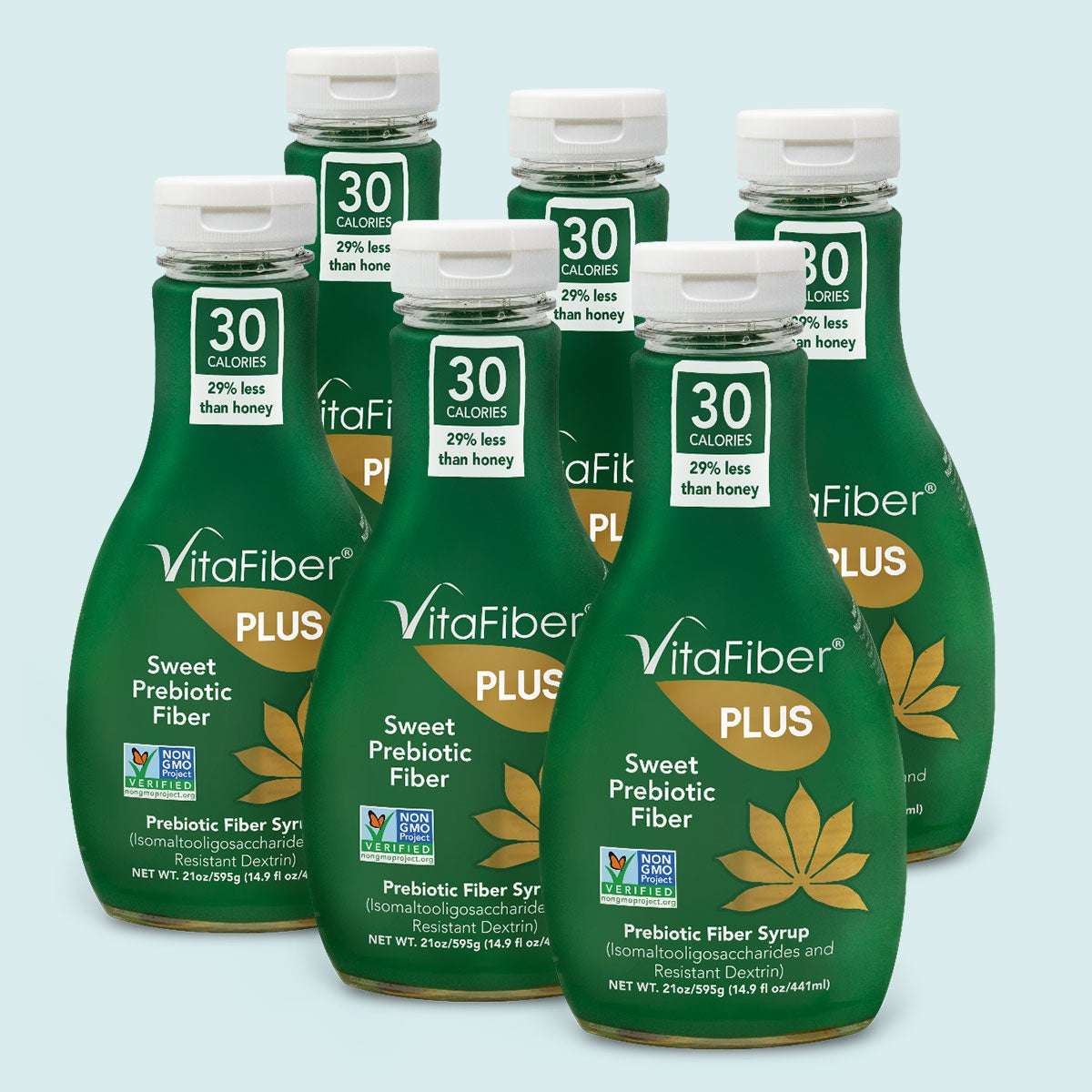 There you are – ready to make your favorite protein bar substitute. After much searching, you selected a golden recipe that will yield you the bars of your dreams!

As an ingredient hard to come by, VitaFiber is one that might need to be replaced in your next recipe.

In this article, we talk about the top substitutes for VitaFiber, how to select them, answers to top questions, and popular recipes that use this powerhouse ingredient.

VitaFiber, in powder form, oftentimes can be called for in baking. Let’s consider some other powder options.

Commonly chosen for gluten-free recipes, coconut flour is one of the many food products made from the fruit of the palm tree Cocos nucifera.

It is made from dried, ground coconut meat and is a natural byproduct of coconut milk production.

Like wheat flour, coconut flour is a white or off-white flour commonly used in baking.

Coconut flour has more fat, protein, and fiber than regular flour, also making it a good option for people on vegan or vegetarian diets who are concerned about getting enough iron.

And like VitaFiber, coconut flour has a lower glycemic index.

Agar Agar Powder is a powerhouse healthy vegan thickener. It has no odor or flavor, and it’s high in fiber and iron.

It’s a great substitution for gummies, pastries, soups, gravies, and cakes. You can use it ½:1 in place of VitaFiber.

Most prebiotic fiber powder blends are made of inulin, resistant starch, and soluble dietary fiber that are all beneficial to the growth of good bacteria and a healthy gut.

What’s more, supplements with matching pre-and probiotics bring the benefits of a synbiotic. In addition, a prebiotic should contain at least two different nutrients for maximum digestive support.

Try to select a blend with only natural ingredients. Because this blend would be taken as a supplement, it can be taken 1:1 for VitaFiber.

Yacon syrup is extracted from the roots of the yacon plant (indigenous to the Andes mountains). It’s a sweet-tasting syrup with a look and consistency similar to molasses.

It’s an excellent replacement as a prebiotic because of its hard-to-pronounce ingredient called fructooligosaccharide (FOS)-a powerful prebiotic that reaches the colon unmetabolized and nourishes the good bacteria in your system.

Yacon syrup has prebiotic fiber, which helps to improve gut bacteria. Use ⅔ c yacon syrup for every 1 c VitaFiber.

In trendy brews, VitaFiber can be used as a low-calorie sweetener. There are plenty of options on the market though that can be a replacement. Here are just a few.

Chicory has grown as a wild plant since ancient times. Both the ancient Egyptians and Romans used the root of the plant to detoxify the liver and purify the blood.

Monk fruit, also known as lo han guo or Swingle fruit, is a round fruit native to southern China.

Monk fruit sweeteners are no-calorie sweeteners that can be used to lower one’s intake of added sugars, much like VitaFiber.

In powder form, especially, it is great in baking, creating that perfect substitute for cookies, coffees, and those protein bars you are trying to make.

You can replace VitaFiber 1:1 with monk fruit sweetener in coffee, tea, and recipes.

Splenda is a brand name for a sugar substitute that contains sucralose, an artificial sweetener that starts its life as sugar and then is modified to reduce the calories.

It is a common replacement in coffee, cereal, and pancake syrup. Splenda can be used in place of VitaFiber 1:1.

Stevia is a natural sweetener and sugar substitute derived from the leaves of the plant species Stevia rebaudiana, native to Brazil and Paraguay.

It’s a very common replacement for sugar and it is a great option for those on low-calorie or low-carb diets.

It is 300x sweeter than sugar, so the substitution is quite unique. Substitute 1 c of sugar for 18 to 24 stevia sweetener packets, 1/2 tsp of stevia powder, or 1 tsp of a liquid stevia extract.

Liquid allulose is a simple sugar naturally found in figs, raisins, jackfruit, and kiwi is made through a natural enzymatic process using non-GMO corn.

Appearing twice on our list, yacon syrup is a sweet-tasting syrup with a look and consistency similar to molasses.

It’s also an excellent replacement for baking and syrups. Use ⅔ c yacon syrup for every 1 c VitaFiber.

How To Select The Ideal Substitute For VitaFiber?

The first step is identifying what role VitaFiber is playing in your recipe – is it a sweetener or a thickener? Is the recipe calling for liquid form or powder form?

You will want to select a substitution that emulates the characteristics of the original role.

Next, choose a substitution. Many of these substitutions can be found in your pantry, at your local grocery store, or online.

There are also many brands that craft these replacements, but not all of them are non-GMO (like VitaFiber-a choice, not a necessity).

All of the substitutions below are gluten-free and vegan and meet most allergy needs.

In this article, we will look at five different substitutions and in what applications they work best. We will also go over some commonly asked questions pertaining to VitaFiber.

VitaFiber is a brand that produces sweet natural fiber that provides low-calorie and soluble prebiotic fiber for digestive health.

It’s ideal for those who are interested in increasing their fiber intake, as well as consuming a healthier alternative to sugar or flour.

It’s prebiotic and it helps to reduce both the caloric value and glycemic impact. It’s also sugar-free and gluten-free.

VitaFiber can only be purchased through their online store or through two locations in Canada, which means you have to be prepared for any recipe it might be mentioned in.

The VitaFiber site has many recipes, as well, to make sure you get good use out of any purchase.

VitaFiber comes in both syrup form and powder form, but it isn’t always easy to find. If you stumble upon it in a recipe, you may find your pantry or grocery store lacking this trendy ingredient.

Lucky for you, there are plenty of common alternatives out there to help make your recipe a success.

As a sweetener, VitaFiber is a great substitute for sugar. Its extra benefits include promoting digestive health because it’s a source of dietary fiber, it doesn’t have any weird aftertaste like other alternatives on the market, and it’s 42% fewer calories than sugar or honey [1].

VitaFiber is a powerhouse sweetener for special dieters (non-GMO, vegan, dairy-free, low calorie) who love to make treats from scratch.

One of the greatest traits of VitaFiber is that the product is non-GMO certified and free from gluten and most common allergens (eggs, milk, mustard, peanuts, crustaceans and mollusks, fish, sesame seeds, soy, sulfites, tree nuts, wheat, and triticale) [1].

VitaFiber is a lower-calorie, natural sweetener that also provides a good source of prebiotics for improved digestive health.
The company also states it is better-tasting, unlike some other sugar alternatives.

What Is VitaFiber Made From?

The full name of VitaFiber is ‘VitaFiber IMO’, which stands for Isomaltooligosaccharides- a mixture of short-chain carbohydrates that have digestion-resistant properties.

The raw material used for producing IMO is plant-based starch (pea or tapioca), which is converted into a mixture of these isomaltooligosaccharides.

VitaFiber® is the only IMO derived from pea starch through a patented process [1].

VitaFiber is really only two ingredients: Isomaltooligosaccharides and water. The powder version is simply the VitaFiber syrup spray dried into a powder.

Popular Recipes With Vitafiber (And Substitutions)

This 10-minute, low carb recipe is an easy way to make your own delicious cinnamon bun-flavored protein bars. This recipe is gluten free and vegan.

This delicious breakfast treat will make you jump out of bed in the morning. This recipe is gluten free and vegan.

Adapted from: Losing Weight My Mission>

VitaFiber is a brand that produces sweet natural fiber that provides low-calorie and soluble prebiotic fiber for digestive health.

Depending on your use, there are many great alternatives out there. Among them, coconut flour, yacon syrup, monk fruit sweetener, and stevia make easy-to-find and easy-to-use replacements.