What To Serve With Chicken And Dumplings? [Find Out Now] 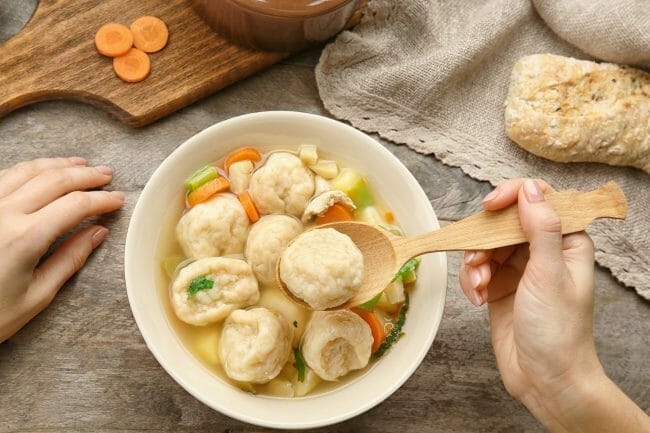 Chicken and dumplings is a great American classic dish that just about everyone has eaten at some point in their life.

I remember eating chicken and dumplings on bitterly cold days when I was a kid.

The hot soup with warm pillowy dumplings and succulent chicken was the best way to warm you up after playing outside in the snow.

There are many different variations of the dish that can range from the type of broth that is used or created to the types of ingredients included in the soup.

I personally like my chicken and dumplings to be a dish that is similar to chicken noodle soup with vegetables.

The only difference is that the noodles have been replaced with dumplings. The dumplings also need to be made from scratch and not the premade biscuit dough that comes in the can.

However, there are plenty of versions of the soup. Some variations have a cream-based liquid instead of a chicken broth that I used to.

You also may not include various vegetables like carrots, celery and onion in the soup.

Although there is one thing, we can agree on which is chicken and dumplings is one of the best comfort foods period.

Even though Chicken and Dumplings is a very versatile dish there is going to be some confusion on what to pair it with. Depending on how you prepare the dish will also determine the side dish you should choose.

If you are going with the traditional cooking style of chicken broth, dumplings and chicken then there are plenty of sides to choose from. However, if you are using a cream-based broth, you may want to choose a lighter type of side to accompany the meal.

When it comes to soup, you can never go wrong with a nice crusty loaf of bread. This goes for any version of chicken dumplings as well. The bread will work nicely to soak up all the broth of the soup.

For the most part, chicken and dumplings already has a protein and a starch so the logical thing to accompany it with is vegetables. Having a vegetable side will balance out the meal and not leave it too one sided or heavy.

7 Best Side Dishes To Serve With Chicken And Dumplings

One of the classic side dishes to accompany chicken and dumplings is mashed potatoes.

While this does seem somewhat odd, it is just what has been done for ages. Besides, doesn’t mashed potatoes go great with just about everything?

A mashed potato side is nice to have with a hearty soup like chicken and dumplings.

Traditionally, mashed potatoes are usually served in the soup as well, as long as it is a broth base.

The mashed potatoes will turn the soup into a thicker and more filling soup that some people are after.

Of all the breads you can choose from, cornbread is going to reign supreme in this case. It doesn’t have to be over the top cornbread either.

You can just make a small batch out an instant box of Jiffy or Bisquick mix if you wanted.

Corn bread usually tends to be crumbly when eaten and will help to soak up all the delicious broth of the soup.

The natural sweetness of the cornbread also plays a role in the dish in terms of contrasting flavors. Just remember, when in doubt, make cornbread.

If there are no carrots in the chicken and dumplings already, then maybe try out some divine glazed sweet carrots.

They are very easy to make and the glaze can be just about anything. All you need to do it cut the carrots in small pieces or coins and boil them until they are soft and tender.

Then place them in a sauté pan with some butter and deglaze the pan with maple syrup or honey. You can add some fresh parsley, salt and pepper as well if you want.

4. Crunchy Or Crusty Loaves Of Breads

As I mentioned before, you can never go wrong with a nice crusty loaf of bread to accompany your chicken and dumplings.

If the soup you made already has some vegetables included, then this will be the best route to take.

The bread acts as a vessel for the broth to soak everything up after the ingredients are gone.

Plus, it also adds another texture to the meal so it is not just a one-note dinner with the family.

Normally, you would either have a soup or a salad with the meal. Since the actual main course is a soup, then a salad is warranted in some cases.

If you want to stay on the healthier side of things, go with a nice garden salad and your favorite dressing. The salad will bring some much-needed freshness to the meal.

It also will be contrasting in temperatures and textures when switching from soup to salad during the meal.

You can add any type of vegetable you like to your salad but don’t go overboard. You still want the chicken and dumplings to be the star of the meal and not the salad.

If you still want to have a somewhat healthy side but need it to be a warm side as opposed to a salad, this side dish will work nicely.

Broccolini is commonly known as baby broccoli and is sometimes called broccoli rabe.

The stalk of the broccolini is long and thinner than broccoli and needs to be parboiled or blanched before consuming or cooking in another method.

Once the broccolini has been blanched, toss it will some olive oil, salt, pepper, and minced garlic.

Bake the Broccolini in the oven at high heat for about fifteen to twenty minutes until tender.

Once the broccolini comes out of the oven, shave some pecorino cheese over the top and serve. You can also add a lemon wedge to the side dish as well.

Another great alternative vegetable to try baked is cauliflower. Although it may look similar to broccoli, the taste and texture are vastly different.

Cauliflower also needs to be par boiled or blanched before cooking this way. Once it is blanched, break it up into small pieces and toss with some heavy cream, shredded cheddar cheese, salt and pepper.

Place the cauliflower in a baking dish and cover with some Italian bread crumbs. Bake in the oven at high heat for 30 minutes or until soft, tender and the breadcrumbs have turned golden brown.

The cheese will have melted and turned into a sauce that forms around the cauliflower nicely. Think of this side dish as a healthier alternative to macaroni and cheese.

The Best Breads To Serve With Chicken And Dumplings

While any type of bread will work with chicken dumplings, there are some that are better choices.

When I was younger, my family was usually hard up for cash so we just ate regular sliced bread with butter on it.

This is one way to go with but there are better options available out there.

The type of bread doesn’t really matter as long as it has a nice crunchy exterior and soft and tender inside.

A really good bread to choose from would be French Baguette bread in this case. But you can also just go with a larger loaf of bread that is sliced like Italian bread.

You could also go with the basic dinner rolls or sweet Hawaiian rolls.

Or even get some of the crescent rolls in a can and bake them off yourself. Just be sure not to make biscuits because they are the exact same thing as dumplings in the soup.

Wines That Pair Best With Chicken And Dumplings

Normally, you would see people pairing wine with a dish like chicken and dumplings. It just seems odd to some people.

But if you are one of those people that likes to pair wine with all your dinners then you do have some options.

As said with chicken, you usually want to go with white wine. Since the chicken is in a broth, you are able to change it up a bit with some other red wines too though.

Since it is a soup with a warm broth, you are going to want to choose a wine that is dry.

A good choice to go with is always going to be Chardonnay in terms of dry white wines. If you want a red wine, go with a delicate pinot noir.

What Dessert Should Be Served With Chicken And Dumplings?

There is a definite answer for the type of dessert to choose when it comes to chicken and dumplings and that is chocolate.

Literally, any type of chocolate dessert will help to round out the meal and end on a great note.

Chicken and dumplings is a well-rounded and hearty meal so you will want to end the meal in the same way.

If you can make the dessert a hot or warm chocolate dessert, then that will be even better. It doesn’t have to be, but it does help.

A nice chocolate lava cake or dark chocolate brownie served with vanilla ice cream should be right up your alley.

If you want to go with something on the colder side of things then some chocolate ice cream or whipped chocolate mousse should do nicely.

Chicken and dumplings is the perfect end to a cold hard day outside or at work. It really just helps to come home to a soothing warm bowl of soup when it is miserable outside.

Chicken and dumplings is usually made with love from a parent or loved one in this way.

So, there should be no difference when it comes to the side dish. Try to stick to hearty and wholesome sides to accompany your entrée and they will love you forever.

Kevin has spent 20 years as an Executive Chef, focused heavily on recipe construction and menu development. Today his focus is on writing, consulting to restaurants, and teaching culinary arts. In his spare time, Kevin loves to cook with his lovely wife and kids.