What To Serve With New England Clam Chowder? [Best Side Dishes] 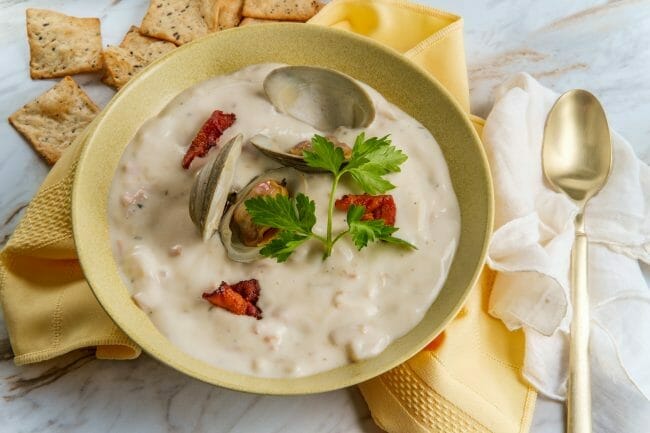 Ask any American, and there’s a strong emotional pull to clam chowder. Whether your family served it for Christmas Eve, as a regular Friday dinner, or even part of a 4th of July celebration like the early Americans, chances are, chowder has a nostalgic connection of home and hearth.

For me, growing up in an Irish family in California, chowder meant one thing, rich, thick creamy New England clam chowder with potatoes, served San Francisco style with sourdough bread. Now that I have my own family, I find myself frequently serving this classic dish because it’s one my kids often request. To bring new life to this tried and true standard, I mix up the side dishes to give it a unique feel each time.

My favorite side dishes for New England clam chowder are various toppings like bacon, oyster crackers, and shredded cheese—a variety of vegetable side dishes, like roasted vegetables and fried potatoes, and always a hit.  Deli meats, either on a charcuterie board or sandwiched between fresh Hoagie rolls, make for an easy weeknight dinner. I like to vary breads and crackers for a lighter side dish and serve a fresh, crisp lettuce salad.

Beer and Chardonnay is a standard beverage to serve with chowder, but I also like to offer hard apple cider. For a lighter drink, apple juice pairs well. And for dessert, everyone will look forward to a sweet with a hint of molasses.

Chowder is a particular category of soup that is somewhere between a soup and a stew. Typically fish-based and made with cream, it is a popular dish in the Americas derived from shipboard food.

Are There Different Types Of Chowders?

Chowder in America is very regional. In the mid-west, cream-based corn chowders are very popular. In the northwest, Rhode Island clam chowder doesn’t have any dairy products, just clams, potatoes, and broth.  And Manhattan clam chowder, influenced by Portuguese sailors, has the added addition of tomatoes.  However, New England has clams, bacon, and potatoes simmered in clam broth, milk, and butter.

New England and other cream chowders are incredibly rich and need completely different side dishes than Manhattan and Rhode Island clam broth-based chowders.

One of the best ways to encourage even the most reluctant eaters is to let them create their own soup.  Toppings are a great promoter of dinnertime fun.

New England clam chowder is a soup that benefits from toppings, and its velvety cream-base lends itself to incorporating various textures and flavors.

Originally chowders were thickened with crackers during the cooking process.  But today, most chefs thicken chowders with a roux (mixture of cooked flour and butter) or potatoes.  So instead of letting the crackers soften and incorporating them in the stew, sprinkle a few on top for a crunchy contrast to the velvety cream.

Many chowders have bacon as an essential ingredient in the stew. Though it will give a rich meaty flavor to the soup, it will lose its brittle snap through the cooking process. Reserving a little fried bacon as a topping will give your meal a complete feeling and help highlight the smokey flavor.

The first time I tried hot sauce with clam chowder was at the World Famous Iver’s Fish Stand in Seattle, Washington. I was a little hesitant, but just a few drops of tabasco or Cholula hot sauce are all you need to get a pepper flavor without the pain. The hot sauce initially cuts through the rich cream for a strong spice effect. But the milk base helps to clip the long-burning sensation for a satisfying return to the chowder flavors.

Though most chowders have some vegetables, usually chopped onion, celery, and potatoes, it’s nice to serve a vegetable sides dish to brighten up the table and add a little more nutrition.

My fridge always has a head of fresh lettuce, and it’s my go-to when I need a quick vegetable side dish.  Any type of lettuce would work, but I would choose sweeter lettuce, like Bib, Romaine, or red leaf if I had a choice.

If you’re looking for a little more protein with your soup, you could add a poached egg to your salad and a light dijon mustard vinaigrette.

Just about any vegetable can be roasted, but my favorite ones for New England Clam chowder are colorful vegetables seasoned with a generous amount of dill. The color contrast is striking, especially if you use orange carrots, green Brussel sprouts, and yellow corn.

Try to chop the roasted vegetables larger than the chowder vegetables, so you have a nice variation between the two dishes.

As a Mom, it’s hard to recommend this incredibly decadent combination.  But as a lover of french fries, it’s hard not to share this heavenly match.  It’s doesn’t score high on the health scale, but it knocks it out of the park on the flavor scale.

The crunchy, salty, warm, fried potatoes and the smooth milky soup is ethereal but certainly not low-calorie.  However, knowing it’s a special treat, maybe once in a while is okay!

Though New England Clam Chowder is commonly served as a main course, there’s no reason you can’t make it a side dish.

Most sliced deli meats would be a nice pairing for New England Clam Chowder, and a charcuterie board would be both appetizing and visually pleasing. Ham, salami, spice capicola, and even chorizo would make a nice contrast with the creamy soup.

If you prefer your deli meats in a sandwich or wrap, this too would be a good option with chowder. Don’t forget to include lettuce and tomatoes for a super fresh and flavorful meal.

But for an even more straightforward, one-dish meal, an interesting bread is enough to make this memorable. With a bit of preparation, you could vary the bread and have an entirely new experience each time.

Drop biscuits or rolled southern biscuits would be an excellent choice. Many storebought brands bake quickly, but it’s not much harder to make it homemade. Start with a drop biscuit recipe, and then graduate to a rolled and cut one. You’ll notice the taste difference and be so proud to serve them to your family.

Anadama is a traditional yeast bread and a New England favorite. Commonly made into rolls, it can also be a loaf of bread.  Made with white flour, cornmeal, and molasses, it’s the perfect complement for creamy chowder.

Sometimes it’s hard to find Anadama outside New England, but if you’re at a farmer’s market or especially a bread shop, keep an eye out for it. Your taste buds will thank you.

Here’s another bread you can learn to make, and it just takes a few minutes. Soda bread doesn’t use yeast, so there’s no kneading or waiting for the dough to rise.  Almost all soda bread recipes are the same. Just follow the steps, mound the dough into a gentle oval, and bake.

Now, this bread you’ll want to buy. You can make it at home, but the unique San Francisco flavor with the extra tangy sourdough actually comes from the cool ocean air and the damp coastal climate.  When this bread is toasted with a generous helping of butter, it’s all you need to complete the classic American chowder.

However, should you even want more, then the crème de la crème of bread is the sourdough bread bowl. Just buy one small round sourdough loaf per person. Using a long serrated knife, horizontally slice ¼ of the top to create a lid. In the remainder, carefully scoop out the bread to create a shell. Now, fill the bowl with New England Clam Chowder and enjoy.

Though the chowder is an easy one-dish meal, sometimes you’re table will look a little stark with just a bowl of white soup.  A fast way to add color and flavor is to include some interesting beverages.

A favorite of New England and almost always gluten-free, hard cider is an alcoholic drink made from fruits, usually apples. The crisp tart acidity of the apples never transforms into cloying sweetness and remains a refreshing choice for robust meals like cream-based chowder.

For me, the ideal beer with clam chowder is a Hefeweizen. I first discovered this beer while living in Seattle during the early days of the craft beer craze. Not entirely a lager and a little more substantial than a pale ale, this is a crisp, drinkable beer with low alcohol content. I love the cloudy amber appearance that is due to the unique way the beer is brewed.

For those who prefer a non-alcoholic choice, apple juice is an excellent beverage for New England clam chowder.  And on chilly nights, you can warm it up and serve it in a mug.

But whether you’re serving New England Clam Chowder as the main course or with several other side dishes, you can imagine how perfectly any dessert with molasses or maple syrup would be for dessert.

There’s no need to go all out, and a maple pecan bar cookie would be perfect. But if you have some time, try making some traditional, homemade Joe Frogger cookies.

They are a New England favorite dating back to the 18th  Century.  Its history is so storied about an African-American New England Revolutionary solider; this cookie is even highlighted in the Smithsonian’s new National Museum of African American History and Culture.

For an afternoon of baking, get your whole family involved in making these iconic molasses spice rum cookies. They are simple to do, and you’ll enjoy sharing and sampling part of American history.

East Coast, West Coast, or somewhere in between, chowder has become a fabric of American cooking.  New England Chowder, with its buttery, velveteen texture, is an American comfort food par excellence.

Though it doesn’t need much more, it’s easy to add flavor and texture to this one-pot meal.  Toppings of all types, like oyster crackers, crisp bacon, shredded cheddar cheese, and hot sauce, elevate this Friday classic.

For extra protein, deli sandwiches and wraps are an easy addition, or you can even compose a meat board with a variety of cured and spiced hams.

Vegetable side dishes like a fresh romaine salad or roasted vegetables are an excellent way to add nutrition and color to your table.

Kelly is a native of California.  After graduation from UCLA, she began her travels living and cooking in Europe, Asia, and the Northwest.  In Tokyo, she earned the Grand Diplôme, for both Cuisine and Pâtisserie at Le Cordon Bleu.

Kelly is a freelance food writer.  She started the website, Tokyo-Table.com, where she reviews Tokyo restaurants from the perspective of a professional chef.  Kelly has written for publications in Asia and North America on all aspects of cooking.  Kelly now lives in Los Angeles with her family and her vegetable garden.