What to Serve with Jambalaya? 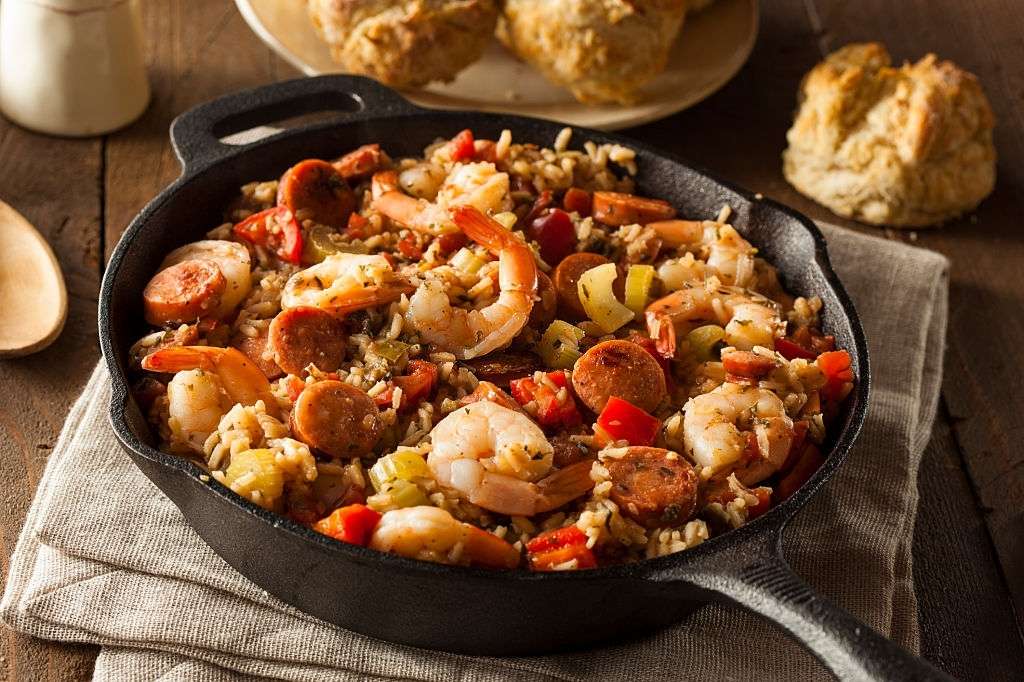 Jambalaya is a dish that comes from the southern part of the United States. The dish is recognized as a Cajun and creole dish but is so much more than that. The base of the dish starts with the “holy trinity” which consists of green bell peppers, onions and celery. The dish is also heavily seasoned with a multitude of spices and a dark roux. You will always find rice in the dish and some type of meat as well.

The main side dish that will work the best is bread. Some people like to bake fresh cornbread to accompany the meal or biscuits as well. You can also add a vegetable side dish to your dinner such as a garden salad, fried okra or corn on the cob. If you want to serve a side dish with your vegan jambalaya, there are options as well. Choose side dishes with texture such as hushpuppies or baguette bread with butter.

We have compiled a list of side dishes for you below that will work great with jambalaya.

Side Dishes to Serve with Jambalaya

To kick off the list, we have drop biscuits. They are super simple to make and go great with jambalaya. The reason they are called drop biscuits is because once they are prepped, you drop them in the pan and then bake them. Essentially, they are just buttermilk biscuits that you would serve with biscuits and gravy.

There are some people that like to modify their recipes and make the biscuits a little fancier. The most popular style is cheddar bay biscuits. These are also a great side dish to go along with jambalaya. The choice is up to you.

Here is another type of bread that really isn’t so much bread as it is a muffin by its texture. Corn bread tends to fall apart easily or have a crumbly texture. This makes it perfect for jambalaya because all the crumbs will just fall into the main dish, just like chili soup.

I like to add some cream of corn to my corn bread when I make it. It adds a lot of moisture to the batter and some extra sweetness from the corn kernels. Other people like to add just plain corn as well. No matter how you make it, cornbread will always be great with jambalaya.

As always, you can never go wrong with a side salad fresh from the garden. This is the best way to add a fresh element to the dinner table. Jambalaya is often a heavy dish with all the meats, rice and vegetables. Not to mention the dish is constructed with a dark and rich heavy roux making it even heavier.

A nice garden salad will brighten up the dinner table and help cut through a lot of the heaviness that goes along with jambalaya. You can use any types of vegetables you want or any type of dressing as well. If it were me, I would use a lighter vinaigrette dressing to keep things light and fresh during the meal.

Typically, there will be some okra already in the jambalaya. However, the sole purpose for the okra to be in the jambalaya is to act as a thickening agent. Okra has a slimy interior which is great for thickening soups, sauces and gravy. So, if you like okra, then you should try a side dish of fried okra.

The side dish goes along with the theme of Cajun and creole food and they are just absolutely delicious. Have a little dipping sauce to go with them and you are set!

Here is another bread that will work nicely with jambalaya. I specifically added baguette due to the heavy French influence in Cajun and creole cooking. It is not uncommon to see baguette bread served with plenty of dishes in the south. The bread has a nice crusty exterior with a soft and tender interior. It makes it great to act as a vessel for the jambalaya and will mop up any leftover sauce.

If you are trying to figure out what to serve with chicken and chorizo jambalaya, corn on the cob will work nicely. It doesn’t have to be corn on the cob, it is just a fan favorite. Personally, I would rather shuck the corn off the cob and eat it like that, but that is just me.

To each their own. One of the best ways to prepare corn on the cob is to roast it in its own husk in the oven for about an hour. Or you can always just place them on the grill while the jambalaya is cooking.

Speaking of corn, succotash is another great side dish to accompany jambalaya. While corn may be one of the ingredients in succotash, there are plenty of other ingredients as well. It is a culmination of vegetables sauteed together with butter and seasonings.

Plenty of fresh vegetables like celery, carrots, lima beans, red bell peppers, onions and garlic. It is a side dish that is sure to please everyone at the dinner table..

Here is a great little side dish that is often times forgotten about. Hushpuppies are small balls of dough that have been breaded and fried. The batter is mainly corn meal so it is safe to say that they are similar to cornbread, just deep fat fried.

This would be the perfect side dish to go with jambalaya and they are often served with the dish in most restaurants. It technically is a bread so it works nicely to soak up any sauce leftover from the entrée. It also works nicely as a vessel for the jambalaya in case you forgot your fork at home!

Wines to Pair with Jambalaya

To determine what type of wine to pair with your jambalaya, you need to know the type of dish you are making. There is one major difference between Cajun and Creole jambalaya and that is the addition of tomatoes. Creole jambalaya has tomatoes while cajon traditionally does not. The addition of the tomatoes brings a nice acidity to the dish which will determine which wine to serve with the meal overall.

This medium bodied wine is slightly acidic and will pair nicely with a Creole jambalaya that does contain tomatoes. The deep fruity notes work well with sausage and chicken while the tannins are able to counteract the acid in the tomatoes.

This is another great wine to pair with a Creole jambalaya. Chianti has a clear and present acidity level which works nicely. If your wine does not have a good acidity level when paired with other acidic foods, it will taste terrible.

Cabernet Sauvignon is fairly similar to the pinot noir but does not have much acidity to claim. This makes it perfect for a Cajun jambalaya without tomatoes. The deep rich flavor of the wine focuses more on the complementing of the protein in the jambalaya. This is great wine to go with when deciding what to serve with beef jambalaya.

Desserts to Serve with Jambalaya

When trying to choose a dessert to pair with jambalaya, it is best to just stick to traditional Cajun or creole desserts. They will always work out nicely and they will fit the theme of the meal. These desserts have been around for a long time and are served in hundreds of restaurants alongside jambalaya, daily.

This is a classic dessert and is favored in the Cajun and creole food world as one of the best. The dessert consists of beer battered bananas that are deep fat fried and smothered in a vanilla dark rum sauce. Topped with scoops of vanilla ice cream. This is a perfect way to end a meal of jambalaya.

This is probably the most known and the most iconic dessert served in the Cajun and Creole food world. They are basically small little donuts that are soft and covered in powdered sugar. Sometimes they are served with a chocolate sauce, maple sauce or just plain by themselves. These tiny delectable will go with the theme perfectly and you won’t regret it!

What Meat Goes With Jambalaya?

There really is not a set type of meat to add to your jambalaya. I have seen many different variations of proteins added over the years. It also does not have to be just one kind of meat. You will often see a jambalaya with two or more meats included in the dish.

Always a great option for a protein and one of the most common used in jambalaya.

You will also find sausage in jambalaya quite often. Most Cajun’s like to use Andouille sausage for the bold spicy flavor of the meat.

These are not as common as other shellfish but are still a great option. Try to get the biggest oysters and always remove them from the shell first.

This is the most common shellfish protein used in Jambalaya. They usually use Gulf white shrimp which are easy to cook and very inexpensive.

These are delicious little dirt lobsters that are a great way to make your jambalaya a little more authentic. You will find these in jambalaya constantly in the south.

Out of the Box Options To Serve With Jambalaya

This is a great alternative to other proteins especially if you are a hunter. The meat can taste a bit gamey, but also works nicely in a jambalaya.

Even though this sounds strange, it is eaten a lot in the south. The meat needs to be tenderized though because it can be quite tough.

These are an excellent source of protein and are used in jambalaya quite often. It makes the perfect vegetarian substitute for meat.

Another great ingredient used in all Cajun cooking. The vegetable does act a natural thickening agent so you may want to add some extra liquid to the jambalaya.

So, if you are in the mood for some jambalaya, make sure you know which one you are making. Whether it is the Creole version or the Cajun Version, there will be some modifications that need to take place before serving to anyone. As far as sides go, just try not to repeat anything that is in the dish. For instance, jambalaya always has rice, so don’t serve rice as the side dish. It is pretty plain and clear, just keep it simple and you will do just fine!

Kevin has spent 20 years as an Executive Chef, focused heavily on recipe construction and menu development. Today his focus is on writing, consulting to restaurants, and teaching culinary arts. In his spare time, Kevin loves to cook with his lovely wife and kids.