Why Are Almonds So Expensive? [Plus 4 Alternatives] 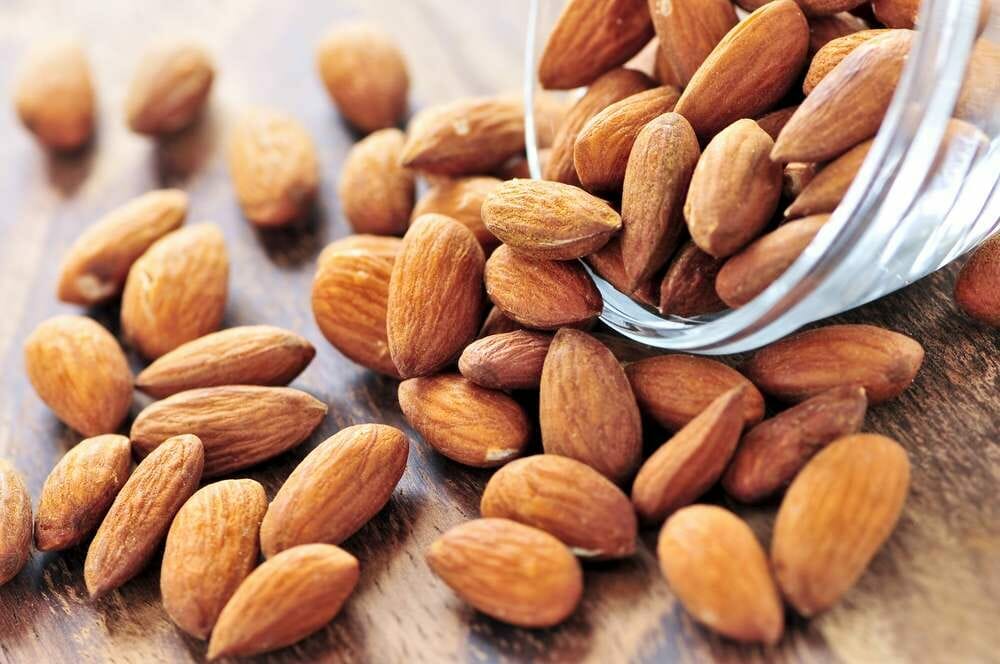 Almonds are a healthy snack that’s both convenient and tasty enough to serve as your mid-afternoon salty pick-me-up.

Whether you’re trying to eat healthier or have always snacked on almonds, you may do a double-take at increasingly expensive prices.

The cost of almonds has almost doubled over the past 5 years, and if current inflation trends continue, it’s likely to increase even more.

You can currently find a 30-ounce bag of Blue Diamond almonds on Walmart shelves for nearly $12.

Compared to a 2+ pound container of Planters peanuts for $6, it’s easy to wonder if almonds are worth the price difference.

Almonds are expensive due to land prices, a lengthy harvesting process, drought conditions, and the increased cost of labor and pollination. Almonds trees are large and require a lot of land and water in a state where land is expensive and droughts are common. Almond farmers also spend a lot of money renting commercial beehives to cross-pollinate all of their almond trees.

We’re going to break down the details behind the expensive cost, what makes almonds so healthy, and a few alternatives if you have a tree nut allergy or need to stick to a budget.

The Cost of Almonds

You can currently find Blue Diamond almonds priced at around $0.38/ounce when you buy a 30-ounce bag. The price is the same for raw, salted, or flavored almonds, although the price per ounce increases to $0.58/ounce for a 6-ounce container. One of the best deals I found was a 3-pound bag of raw almonds at Costco for $12, which is $0.25/ounce. Raw sliced almonds for baking are priced at nearly $0.50/ounce or $2/cup.

Almond prices typically fluctuate from year to year, depending on the crop yield, which is impacted by weather and drought.

In years when the almond crop is abundant, prices are lower, and then they’re raised again during smaller crop years.

The price of almonds is set for a full year, so you generally won’t see price fluctuations from season to season.

Almond prices peaked in 2015 and began to slowly fall until early 2020. 2020 saw supply chain disruptions, while 2021 saw the rising cost of labor and materials, leading to more expensively priced almonds.

Why Are Almonds So Expensive

According to The Washington Post, the popularity of almonds grew 220% from 2005 to 2014 as experts gained a better understanding of healthy fats.

As the health-conscious shifted away from meat-based proteins and low-fat fads, the obsession with almonds exploded.

Almonds are constantly cited as a conveniently healthy snack for anyone looking to shed a few pounds or striving to be heart healthy. As demand increases, farmers have to keep up with it, which can drive up the cost.

Outside of the health benefits of almonds, peanut allergies are becoming more prevalent than ever.

As a mom with elementary-age children and one with a peanut allergy, I can tell you that peanuts are rarely allowed in daycares, schools, or as sports snacks.

This makes almonds and almond butter an obvious choice for parents that need to throw together lunches.

What’s more, most store brand almonds are not careful about cross-contamination and warn that their almonds “may contain peanuts.”

This means that anyone with a peanut allergy is spending even more on name-brand almonds, like Blue Diamond, which do not contain any peanuts.

Almonds are grown on large trees that need a lot of acreage, fertile soil, and thrive in a Mediterranean climate. They need a hot and dry summer, as well as a mildly cold winter during their dormant months.

However, almond trees blossom early and can be damaged by late frosts. They need a lot of water, but too much rainfall can cause fungal and bacterial diseases. Sound specific? It sure is.

A whopping 82% of the world’s almonds are grown in California. Based on an analysis in 2020, it was estimated that there are 1.18 million acres growing almonds in CA.

Land is expensive in California, and over the past few years, land values and interest rates have only increased, making it harder and harder to procure the kind of land and loans you need to start, grow, and maintain a successful almond farm.

Spain, Morocco, and Iran are also almond producers, but the fact remains that the majority of the world’s almonds come from CA.

Droughts are common in California, which has serious consequences for almond production. Each almond requires just over one gallon to grow.

If the soil is not moist enough, particularly at the beginning of the season, almond trees will produce significantly fewer almonds.

Most almond farmers have turned to drip irrigation and micro jet systems to control watering throughout the season. As water becomes an increasingly precious resource in CA, the cost of that water climbs.

Temperatures in California are rising, and droughts and wildfires are becoming even more frequent.

Considering this one state produces ⅓ of the nation’s vegetables and ⅔ of our fruit and nuts, the lack of water could have major consequences for agriculture in the U.S.

4.Time is of the Essence

Almond trees are dormant from November through February and begin to bloom in late February.

They are pollinated by bees (a costly process described in more detail below), and the blossoms grow and develop for about four months before opening.

The trees are then shaken by a machine to remove the almonds, and they are sorted, cleaned, and packaged.

All of this work and more goes into each and every bag of almonds, jar of almond butter, and carton of almond milk.

An almond tree can take up to three years to produce its first almond, and 5-12 years before it even turns a profit.

Once a tree is producing almonds, its fruitful season is only from August to October. Luckily, a healthy almond tree will produce for around 25 years.

5.The Rising Cost of Pollination, Irrigation, and Labor

Almond trees need bees to flourish, and lots of them. To be fertilized, almond flowers need to be cross-pollinated by a different variety of almond tree.

Bees feed on the different varieties of almond trees on an almond farm, pollinating and fertilizing them in the process.

Almond farmers rent bees from commercial beekeepers in order to properly pollinate their almond trees, but unfortunately, pollination costs have tripled in the past decade.

As the popularity of almonds grows, so does the need for beehives. The almond farmers in CA alone require 1.7 million hives, which is nearly 90% of the country’s commercial beehives.

Utilizing the bees for almond production in a sustainable way is a challenge but absolutely necessary to prevent endangering the population.

In addition to the rising cost of procuring enough beehives, farmers also have to contend with more expensive irrigation and labor costs.

The cost of storing and shipping a massive amount of almonds is another factor to consider. Smaller profit margins leave farmers no choice but to raise their prices.

Whether you’re allergic to almonds, can’t afford them, or just want to get a little creative with your healthy snacking, here are five comparable alternatives. 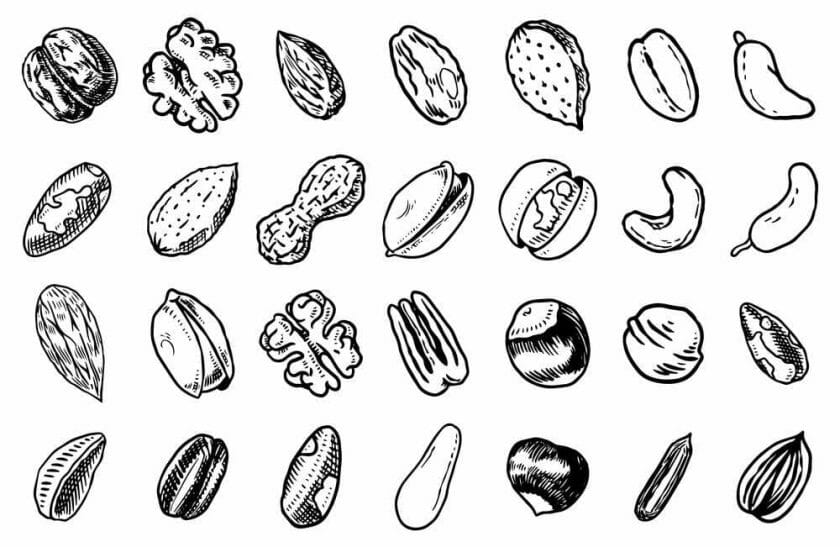 Let’s face it, peanuts just aren’t as cool as almonds. That doesn’t change the fact that they have more protein than any other nut and are much cheaper.

We’ve got a budget hack for you: you can buy a bag of trail mix with almonds, peanuts, cashews, raisins, and M&M’s for cheaper than a bag of nuts.

It’s a crunchy snack that will satisfy your salty and sweet cravings for less.

If you have a tree nut allergy, roasted sunflower seeds are a nut-free alternative that is satisfyingly crunchy and nutty.

You can find them at most grocery stores or roast your own, and they’re even cheaper if you buy them in the shells.

Sweet but crunchy and perfect with yogurt, salads, or on its own, check your grocery store for nut-free granola with extra protein for a filling snack.

You can also make your own with oats, honey, and dried fruit.

There’s a reason the world has gone almond-crazy over the past decade or two. Almonds have an impressive amount of fiber, protein, healthy fats, antioxidants, vitamin E, Magnesium, and Manganese.

They’re low in calories and carbs, but the amount of protein and fat in even a small handful make them filling.

Due to all the amazing vitamins and nutrients almonds are packed with, they have been shown to help people control diabetes, lower blood pressure and cholesterol levels, and reduce the risk of heart disease. It’s hard to argue with that.

Are Almonds Worth the Cost?

Based on the health benefits listed above, I believe that almonds are worth the price. They’re a tasty snack that fuels your body with the best nature has to offer. Check stores like Aldi, Costco, and Walmart to save money by buying bulk or choosing store brands.

If almonds are simply out of your price range no matter what, remember that there are always other ways to be healthy, and following every superfood fad is simply not possible for a lot of families.

Although almonds are incredibly healthy, the impact of almond farms on the environment is certainly worth considering.

Almond trees take a lot of precious resources to grow: land, bees, and water. If droughts in California continue and bees are being worked to death for the sake of pollination, the almond craze of the past decade may no longer be sustainable.