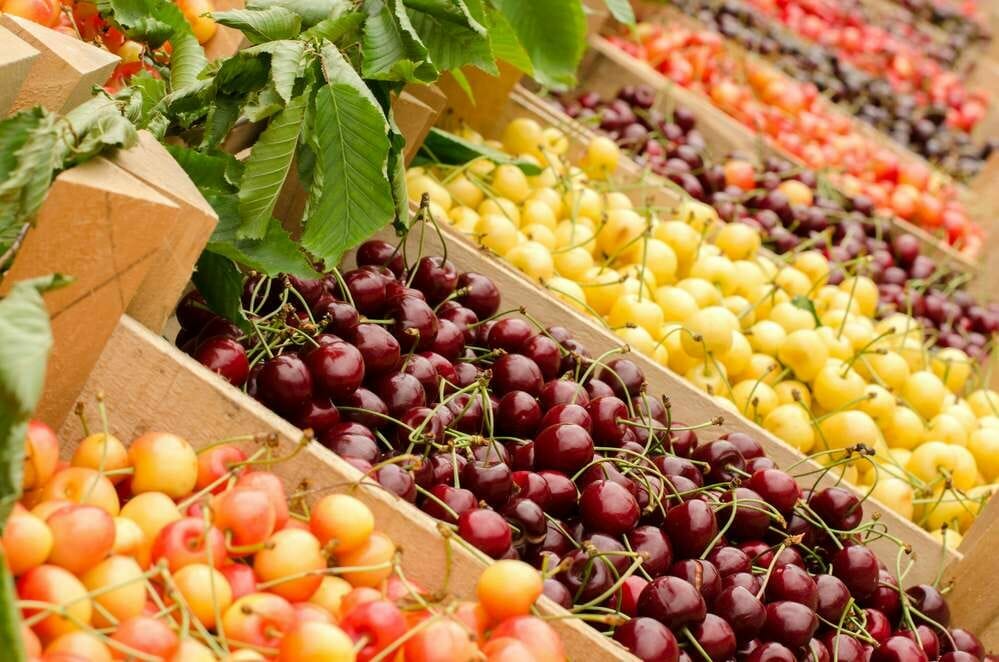 Cherries are a refreshing and delicious summer fruit packed with the perfect balance of tart and sweet.

While cherry-flavored candies and juices tend to be sickeningly sweet, they bear little resemblance to the subtle flavor of fresh cherries.

When cooled in the fridge, there are few things more refreshing on a hot summer day.

They’re a treat and not just because of the taste- they are one of the most expensive fruits in the produce aisle. My kids beg me to buy them, but it’s hard to affordably buy enough for the whole family to enjoy.

You may have noticed that they tend to be significantly more expensive than other bagged fresh fruits in the produce aisle.

The average cost of cherries is $3.99/lb as compared to an average of $1.75/lb for other produce.

Cherries only grow in a specific climate and less than ideal weather in that climate results in a very low supply. Not only are cherry trees temperamental, but they have a very short growing season. However, the demand for cherries remains high. Cherries are one of the only fruits that are not typically sold out of season, so when people see them, they tend to snatch them up.

We’re going to break discuss the cost of cherries, why they’re so expensive, the different types of cherries, and a few alternatives for when you just can’t afford to buy them.

The Cost of Cherries

The exact cost of cherries may vary depending on your location and the stores you shop at. Unfortunately, these prices may continue to rise in 2022 along with the cost of nearly everything due to increasingly high labor and supply costs.

The pricing of cherries is affected by the time of year. You can find cherries grown in the United States from June through Labor Day, starting out priced as high as $8.99/lb and typically dropping closer to $3.99/lb as the season continues.

Cherries are rarely sold out of season, but they are occasionally imported from Turkey or Chile during the winter. However, they tend to be bruised, low-quality, and around $8.99/lb.

Why Are Cherries So Expensive

Most fruits, like apples, cantaloupe, blueberries, and strawberries, have a longer growing season where you can find the fruit for a much cheaper price.

During a fruit’s growing season, many home cooks and fruit-lovers will stock up at their grocery store or local pick-your-own orchard.

By canning and freezing fresh fruit, they’re able to enjoy the sweetness of any growing season year-round.

However, cherries have a very short growing season, which means that cherry season passes in the blink of an eye, and it often isn’t long enough to see a significant price drop.

Not only are cherries one of the most expensive fruits, but they rarely fall into a budget-friendly price range.

California cherries make it to market before Washington or Oregon cherries. Because they’re the first to hit the store, they charge more.

Eager cherry-lovers quickly grab the bags- not realizing they may end up spending as much as $10/lb.

To offset these crazy prices, CA cherries are often sold in a 1.33 lb bag instead of 2-3 lb bags at the beginning of the season. While you’re certainly not paying less per pound, at least it’s a smaller bag.

Washington cherries are seen in June at slightly lower prices, and sour cherries from Michigan are available in July and August.

By July, cherries will be at their lowest price, in the $2-4/lb range, and you may luck out with a Fourth of July sale at your local grocery store.

Cherry season in the U.S. wraps up in August, although you can find cherries from other countries in the off-season.

While novice gardeners may be able to grow their own strawberries, blueberries, or even apples, that’s typically not the case with cherries.

Cherry trees not only require a certain climate, but they’re very hard to properly maintain.

In the U.S., sweet cherries are grown on the West Coast in California, Washington, and Oregon, while sour cherries typically grow in Michigan.

Cherry trees are temperamental and the crop yield is easily affected by late frosts, heavy rains, and early warm weather.

As you can imagine, a crop that only grows commercially in a few states and requires certain conditions limits the number of large-scale cherry farmers that exist across the country.

Additionally, cherry trees don’t produce the same amount from year to year. In years with a lighter yield, the prices will be higher.

Cherry trees are difficult to harvest, maintain, and require a specific (and expensive) fungicide to flourish.

Birds present a huge pest problem, and covering an entire cherry farm with netting is not cheap.

While it can be easy to feel cheated or annoyed by the high cost of cherries, it truly is so that cherry farmers can turn some kind of profit for all of their hard work.

If cherries only grow in a specific climate, but they’re wanted around the country, that means that more money is spent importing and exporting.

To get your cherries to you from thousands of miles away in the right conditions- at the right temperature, with no bruising- comes at a cost.

Cherries are also very perishable and can quickly bruise and turn mushy and soggy. They are at peak freshness for only a few days after being picked and need to be quickly transported across the country.

In the off-season, you can find cherries from Turkey and Chile, but again, the price reflects the shipping costs.

There are many varieties of cherries, and they’re typically classified by taste and color (sweet, sour, red, dark red, and yellow). These are the ones you’re most likely to see on supermarket shelves.

Bing cherries are the most common, packed full of antioxidants and anti-inflammatory compounds. They’re sweet, dark red, and delicious in pies or as a snack.

Rainier cherries have yellow and red skin and are even sweeter than Bing cherries. This, combined with their tendency to bruise easily AND a very short season, means that they’re also more expensive.

Similar to Bing cherries, Chelan are dark and heart-shaped, but not quite as sweet. They have an early season and firm skin that rarely splits.

Grown in Michigan, these are the most popular sour cherries in the U.S. Due to their tart flavor, they’re typically sold frozen or canned and used for pies and juices.

Other varieties include Brooks, Attika, Sonnet, Lambert, Orondo Ruby, Morello, and many more.

No matter what variety of fresh cherries you stumble upon, they’re all packed with vitamins C, K, and A, as well as fiber, potassium, calcium, and antioxidants.

Their anti-inflammatory properties make them ideal for muscle recovery for runners and athletes.

You can find blueberries at most grocery stores year-round, and at an average of $1.40/lb, they’re certainly cheaper than cherries. Blueberries are delicious as a snack, in pies, baked goods, or frozen for smoothies.

We know- a grape will never be a cherry, but hear us out. They’re firm, juicy, and refreshing, just like cherries, and at a much better price.

Pop them in the freezer for a cool summer treat while you keep an eye out for a cherry sale.

Another quintessential summer fruit, cantaloupe costs about $0.50/pound and is never expensive, no matter the season. Slice it up as a healthy snack when cherries are nowhere to be found.

Sweet and tart, cranberries may just satisfy your cherry craving at a lower price. You can find this superfood in the produce section, and use it for baking, snacking, cocktails, and pies.

While raisins may not be the most exciting snack, they are cheap. They work well in granola, salads, oatmeal, and trail mixes to add an inexpensive fruity flavor.

Whether you simply can’t afford to spend $10 (or more!) on a bag of fruit or cherry season is long gone, there are other fruits that will help get you through.

Are Cherries Worth the Cost?

The combination of a short season in one specific location results in a product that’s set at a consistently higher price than other fruit. This begs the question: are cherries worth the high cost? In my opinion, fresh cherries on a hot day are the epitome of summer and worth the splurge.

That being said, I’m certainly not buying cherries every week of cherry season. How often you can afford to buy cherries during the summer depends on your budget and the size of your family.

When you do buy them, make sure you’re getting the best bang for your buck by carefully inspecting them.

Look for firm cherries that aren’t squishy, soggy, or moldy. You can find cherries at local your grocery store, including Aldi, Cosco, Walmart, and Target.

Lastly, call your local orchard to find out if they grow cherries, if you can pick your own, and what the cost per pound is. You may be surprised to find that a fun afternoon out can save you some money.

While most commercially sold cherries come from the West Coast and Michigan, there are plenty of farmers across the country who grow cherries on a smaller scale.

If you’re holding out for the best prices, skip the May and June cherries and wait for July and August.

The Fourth of July is likely the only time you’ll find a significant sale on cherries. But keep in mind- if you love cherries, grab some, because they won’t be around for long!