3 Yummy Sweetie Pie Banana Pudding Recipes [How To Make Them] 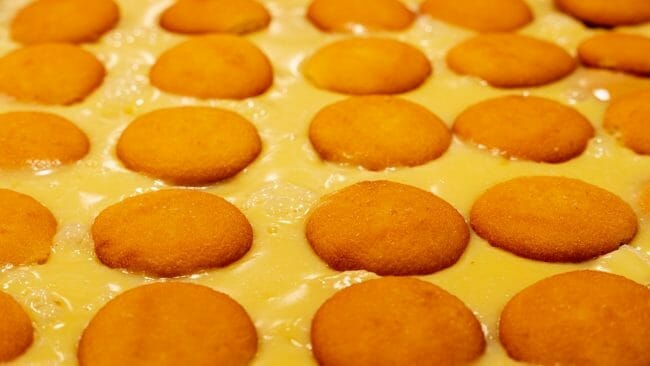 The thickest, creamiest, most luscious no-bake dessert has to be southern banana pudding. Sweetie Pie banana pudding is often regarded as the best because it is seriously sweet. But, how do you make it?

Sweetie Pies Bakery has this recipe down. It is the recipe that helped the bakery take off in popularity. This even lead to a TV show about the franchise!

Here are three Sweetie Pie Banana Pudding-inspired recipes that use similar ingredients in many different ways. Each recipe is deliciously decadent.

The first recipe is a nod to Miss Robbie, the original creator of Sweetie Pie Banana Pudding. This is her recipe, using instant banana pudding and whipped topping.

The next banana pudding recipe uses a homemade pudding instead of an instant mix. The taste is truly fantastic and the pudding can be served warm!

You will likely see this recipe on any potluck table in the south. A homemade brown sugar banana pudding is layered with wafers and topped with freshly whipped meringue.

Lastly, we have a banana pudding recipe derived from Savannah, GA native, Paula Deen. She uses a special cookie to create her banana pudding.

3.Not Yo Mama’s Banana Pudding

Paula Deen, the mother of southern cooking, developed this original recipe. Unlike the others, it uses sweetened condensed milk and cream cheese.

What Is Banana Pudding Exactly?

Banana pudding is a layered dessert. It consists of sweetened whipped cream, vanilla or banana pudding, vanilla wafers or cake, and sliced bananas.

Banana pudding is similar to an English trifle, a cake and cream layered dessert. It is found around the USA, especially in the American south.

Icebox cakes are layered desserts with cream and cookies. As the cookies sit with the cream in the fridge, they soften. The result is a cakey texture with creamy layers in between.

Sources are divided about who popularized the banana pudding recipe first. Some day it was Good Housekeeping in 1888. That recipe featured custard, bananas, whipped cream, and sponge cake layered in a dish.

Others say that the New York Times first mentioned banana pudding in 1878. This would have been 10 years before the Good Housekeeping article.

The main difference between the two articles was the use of sponge cake versus wafers. That debate still sparks controversy today.

Who Is Sweetie Pie?

Miss Robbie Montgomery is the owner and proprietor of Sweetie Pies Bakery. She is a soul singer from Mississippi.

Miss Robbie was previously a backup dancer for Ike and Tina Turner! Her music career soared before becoming the franchise owner of Sweetie Pies.

The bakery even had a television show in 2018. The show featured the owner and her employees as they related to Sweetie Pies. Shots of the baked goods commonly showed banana pudding.

The location in Napa Valley, CA still operates today. The original banana pudding is not for sale, but you can order their banana cream pie. The pie has real bananas inside and is made with a graham cracker crust.

Can You Use Other Ingredients In Banana Pudding?

As stated before, the base ingredients to banana pudding are:

You can make variations using several other ingredients. Consider any of these additions when spicing up your southern banana pudding:

How Did Banana Pudding Become Popular?

Before the American Civil War, bananas were not commonly found in the US. Importing took place from the West Indies and bananas were shipped via boat.

Furthermore, American businessmen in the late 1800s wanted to capitalize on bananas. This created a consumer taste for the fruit. Bananas were marketed as exotic fruit and their popularity took off.

Articles such as the aforementioned New York Times and Good Housekeeping articles further heightened their popularity. Then, in 1921, a lady from Bloomington, IL published the first homemade banana pudding recipe.

The National Biscuit Company, or NABISCO, capitalized on banana pudding’s newfound popularity at the time. The company started printing banana pudding recipes directly onto the vanilla wafers packaging. The recipe remains on the packaging to this day.

What About The South?

The connotation of banana pudding and the American South is less clear. The original recipes came from Illinois and the East Coast, yet it is still an adopted southern staple.

Many believe that this happened due to banana pudding’s ability to feed many with few ingredients. Southerners have notoriously gotten by with very little during hard times.

If you are making a large amount of banana pudding, save some of the ingredients for a few personal servings.

Sweetie Pies Banana Pudding has set the bar very high for banana pudding recipes.  Thankfully, the restaurant has released the recipe to the public.

Any southern banana pudding recipe is a safe bet. Although the origins are unclear, southerners know how to make a great pudding.

Make any of these three southern banana pudding recipes and you will not be disappointed. Banana pudding is the perfect delicious dessert to feed a crowd!