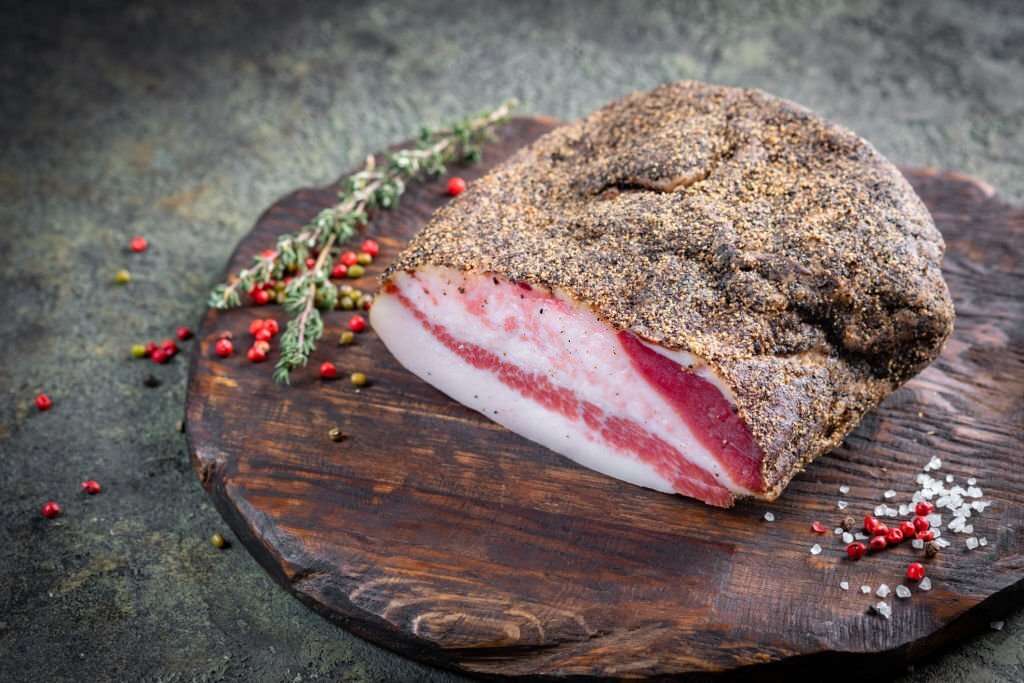 When I was a teenager, I walked into the kitchen where my brother was cooking. I asked what he was making and he said, “bacon spaghetti.”

This is a classic example of my family’s improper substitutes in cooking. For a long time, I didn’t realize that “bacon spaghetti” was a thing — just not the way my brother made it.

Now that I know what spaghetti carbonara is (and have even eaten it in Rome), I realize his mistakes.

If you want to make spaghetti carbonara or all’amatriciana sauce, you will want to find some guanciale, Italian cured pork.

Guanciale can be hard to find in the US, so as a substitute, try pancetta or prosciutto. If those are also not in your local market, try bacon (yes, really) speck, lardo, pork jowl, or salt pork. Adventurous home cooks might try making some homemade guanciale. A really limited grocery store may present a challenge, so try ham or a smoked turkey breast if that is all that is available. For vegetarian diners, you still want the saltiness, so try adding brined olives.

Keep reading for specifics about different types of cured meat and other substitutions for guanciale.

We also included instructions for homemade guanciale and recipes for spaghetti carbonara and all’amatriciana sauce.

Since finding guanciale in the US can be difficult, you should try looking for other Italian meats like pancetta or prosciutto. Pancetta is salted and cured pork belly (as opposed to pork cheek).

Pancetta is usually seasoned with similar spices to guanciale, garlic, pepper, thyme, and of course the salt to cure it.

Sometimes it comes smoked, but for the closest flavor, avoid smoked varieties if possible.

Arratolata is a pancetta that has been rolled into a log shape and tesa is a slab cut of pancetta. You will usually find pancetta sold in slices or cubes.

The pork flavor in pancetta is not as strong as the guanciale, but it is a good substitute if that is what is available.

Another Italian cured meat you can use to substitute for guanciale is prosciutto. It is a salted and cured pork leg.

You are likely to find it sliced thinly as a cold cut. Some prosciuttos have beed cooked (prosciutto cotto) instead of cured.

Cured prosciutto is a better substitution than cooked prosciutto, but you can use whichever is available in your local shops. Prosciutto has less fat than guanciale, but it is still salty and tender.

American sliced bacon is easy to find and incredibly popular. You can find all kinds of varieties and treatments of bacon.

However, bacon cooks differently and has a quite different flavor than guanciale. One wonderful thing about bacon is its crispiness as it cooks. Guanciale does not become crispy; it has a melt-in-your-mouth texture.

If you can find unsmoked, cured bacon, you will come fairly close to the taste of guanciale.

If you only have salty, smoked bacon, you can blanch it for a few minutes to help remove some of the salt and smoke flavors.

After blanching it, drain and pat it dry with a paper towel. Then you can cook it as your recipe states for guanciale.

Speck is a pork belly that has been smoked and cured. German speck may be pork fat with no meat.

Italian speck is similar to prosciutto because it is the same cut of pork belly, but it is a denser texture. Despite the denser texture, it is still tender and fatty.

Speck is traditionally seasoned differently as well. Typically it is seasoned with juniper and bay leaf. It does have an intense flavor, but the smokiness comes through.

Lardo is a fatty cut of meat from the back of a pig. It is almost all fat and very little meat. It has a mild pork flavor and a rich umami taste.

Lardo is cured in rosemary, garlic, sage, oregano, coriander, anise, and cinnamon. It is then left to age for 6 months. Traditionally, it was aged in a Carrera marble box, but that is not necessary.

Once it has finished curing, you can eat it in thin slices on a charcuterie board or with bread and fruit.

You can also add a few slices to a savory dish right at the end of cooking time and allow the fat to render down.

This adds an herbed pork flavor to your dish. To use it in the place of guanciale, add it right at the end of the cooking time to get the flavor.

Pork jowl is the same cut of meat that guanciale is made from. You are likely to find pork jowl or pork cheek near the bacon at the grocery store.

It is tender and very salty. You can use it to render fat for dishes like al amatriciana or you can cook it like bacon for recipes like spaghetti carbonara.

Salt pork is a cut of pork from the belly that has been salt-cured. It may look like bacon at the store.

Salt pork has more fat than bacon and is not smoked. You can rinse this cut of meat before using it in your recipes to help reduce the saltiness.

If you are an adventurous cook, you might like to make your own guanciale. If so, you need to find a great butcher to properly cut the pork cheek for you.

The proper way of making guanciale takes at least 3 weeks to cure in a proper curing chamber.

You can make one from an old refrigerator and a humidifier. The curing chamber should be between 50-60 degrees and have high humidity (about 70%).

Another easy option for American cooks is smoked ham which you can find at almost any market.

The smoky flavor and lack of fat make this a distinctly different cut of meat from guanciale, but it will work in a pinch.

Smoked turkey is a completely different animal than guanciale. However, if you do not eat pork, you may find sliced smoked turkey breast will work as a substitute.

Similarly, you might try turkey bacon to get the crip, salty flavor without using pork.

Obviously, there is not a vegetarian cut of pork. So, if you need a vegetarian substitution, try using brined olives.

They will offer a soft texture and a saltiness to the dish that would be missing otherwise.

Guanciale is an Italian meat product. The pork cheek is coated with seasoning, salted, and cured.

When it is ready to eat, the fat content will be reduced by about 30%. The remaining fat is highly soluble, so it melts away when you cook it.

It may be served in thin slices as a cold cut or cooked in pasta dishes like spaghetti carbonara.

One significant feature of guanciale is that it is not smoked. This is the significant difference between guanciale and other substitutes like bacon or ham.

Is Guanciale Banned In The US?

In the 2000s, the USDA began allowing some cured meats from Italy if they were produced in certain regions that have a low incidence of swine flu.

Because this was banned for so long, many people in the US are not familiar with it. Therefore, guanciale is not a typical cured meat found at the supermarket.

You may be able to find US-made versions of his cured pork or use one of the substitutes we detailed above.

If you are lucky enough to have guanciale at your grocery store, you should give it a try in some delicious pasta dishes or as a complement to your next charcuterie board.

In the event you can’t find guanciale, try pancetta or prosciutto as the next best options. You can even make your own guanciale if you are a creative and patient DIY-er.